Many hopes are being placed on commercial construction in 2014, but what are leading industrial companies exposed to the sector saying?

With many companies in the commercial construction sector having already given their results and outlook this year, it's time to start looking at what they are saying about the industry. The investment thesis behind buying into the sector is that a recovery in housing usually precedes a pick-up in commercial construction. So what are the smaller companies focused on the sector like Lennox (LII 1.45%) and Watts Water (WTS 2.83%) are forecasting?  Also, what are large conglomerate saying about the industry?

Larger companies outlook
Blue chip industrials like United Technologies (RTX 1.80%) and Emerson Electric (EMR 2.08%) are interesting to look at in this regard, because their businesses cover a broad range of sectors in the economy. Therefore, their reporting of the commercial construction sector will be tempered by an overall view of the economy.

In general larger companies reported stronger growth in residential than commercial construction in 2013. Moreover, commercial construction activity was somewhat disappointing, because many commentators had expected more. The most keenly followed data point in the industry is the architectural billings index, or ABI, from the American Institute of Architects. Unfortunately, it seemed to tail off at the end of the year.

After a promising mid-year period, the commercial index declined in the last quarter, but it's hard to tell right now if this was a consequence of historically extreme winter in the U.S. curtailing construction activity that would otherwise have taken place. 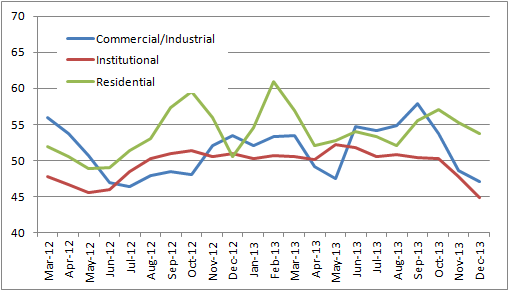 This sort of near-term uncertainty may be causing some companies to give cautious outlooks for 2014. For example, United Technologies has exposure to the heating, ventilation, and air conditioning, or HVAC, market. It's also a leading player in the elevator and escalator market with its Otis brand. When asked about conditions in North America on its recent conference call, management replied that its residential sales finished the year up 18%, but the "better news" was reported on the commercial side: "We saw Otis orders in North America up almost 13% in the fourth quarter and the CCS, the commercial business orders were up about 5% even though sales were down 5%. So we're starting to see that recovery that we have been talking about in non-res."

This sort of statement suggests that better conditions are coming in 2014.

In addition, Emerson Electric's management gave a similar commentary in discussing its recent first-quarter results. Emerson has exposure to the HVAC and climate control markets.  Its CEO, David Farr, outlined that the company was "seeing a lot of inquiries" and "a lot of planning around it", before concluding that he expected the non-residential market "to pickup as the year goes on".

What the focused companies are saying
In 2013, HVAC specialist Lennox International benefited from a strong residential market by increasing its residential revenue by 15% in constant currency, while commercial revenue grew 7%. Interestingly, Lennox appears to be gaining market share, because the Air Conditioning, Heating and Refrigeration Institute, or AHRI, reported residential unit volumes up by only 10%-11% in 2013, with commercial up 2%-3%.

Looking ahead to 2014, Lennox is forecasting North American residential HVAC shipments to be up mid-single digits, while commercial shipments are expected to be up low single digits. A somewhat weak looking forecast.

Plumbing and flow control company Watts Water also gave a cautiously optimistic outlook for 2014. By its own admission its "commercial end markets were somewhat muted" in 2013. However, its CEO, Dean Freeman, outlined:

[There] is more optimism for 2014, although timing of the pickup is still somewhat opaque. Dodge is predicting an 8% overall commercial pickup with some sectors like institutions still lagging. But there are still verticals like hotels and office space that we participate in that are forecasted to grow at double digits this year.

This color may explain why Lennox is relatively less optimistic than Watts Water on the commercial construction market in 2014. The reason is that Lennox is more exposed on the slower growing retail side than on hotels and office space.

The bottom line
In conclusion, the outlook from these companies is cautiously optimistic on the commercial construction sector in 2014. However, given the decline in the ABI, and the uncertainty created by the extreme bad weather in the U.S., it's hard to imagine that they would say anything else. On the other hand, assuming that the residential market (and ultimately the commercial construction market) is going to suddenly change trend in 2014 is also a risky proposition.

All told, if the commercial construction market does pickup in 2014, then these outlook statements will start to look conservative, and Foolish investors can expect some upside to their earnings expectations. That's good news if you buy the idea that extreme weather has caused a slowdown in construction activity.