What is inflation?
Inflation is the rate of increase in the prices of goods and services, or the decline in the "purchasing power" of money.

As an example, the monthly inflation rate in Argentina is taking off and in January was estimated at 6%. That means you need 6% more money than you did just a month ago to buy the same basket of goods and services. Core inflation rate
The core inflation -- its full name is the Consumer Price Index for All Urban Consumers Less Food and Energy -- differs from regular inflation in that it excludes food and energy prices. It's derived from the CPI, which tracks a basket of goods and services that is determined by survey results provided by roughly 7,000 families from around the country. The CPI is updated every two years based on the survey results.

The CPI can be volatile, given the frequent price swings in food and energy. The core inflation rate excludes those to give a more stable picture of underlying inflation. It's mainly an indicator for the economy and does not reflect reality; I, for one, don't know anyone who doesn't eat or use energy. However, one good example of its usefulness came in late 2007, when oil prices took off, carrying the inflation rate upward. Meanwhile, the underlying inflation in the economy was little changed. 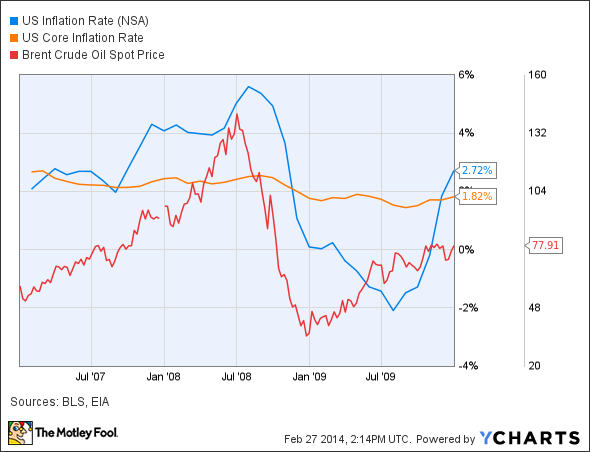 When energy and food prices are volatile, the core inflation rate can give policymakers a look at how the rest of the economy is faring. Inflation is dangerous, because it eats away at investors' hard-earned savings; each year, your dollar is worth less as prices rise. Mild inflation is a killer for those living off savings and fixed incomes. The problem is especially acute in bonds, where the 10-year Treasury yields just 2.7%. At the current inflation rate of 1.6%, investors are only earning an inflation-adjusted return of 1.1%.

How to protect yourself
Education is half the battle -- learning about the factors affecting markets and thereby you. The other half of the battle is how you invest both your time and money.