Dividends don't only provide valuable cash payments for investors, they also convey important information about the progress of a business and management's confidence about the company's future. Coca-Cola (NYSE:KO), PepsiCo (NASDAQ:PEP), Wal-Mart (NYSE:WMT), Ross Stores (NASDAQ:ROST), and Home Depot (NYSE:HD) all increased their dividends in February, so let's look at how things are going for these companies.

Coca-Cola refreshes... its payout
Coca-Cola has lately been hurt by weak demand in the U.S. and unfavorable currency fluctuations in emerging markets, so both sales and earnings came in below expectations during the last quarter. However, management is as optimistic as ever about the company's long-term prospects: Coca-Cola estimates that 800 million new consumers will enter the middle class by the end of this decade, and that should be a considerable growth driver for the undisputed global leader in soft drinks.

Coca-Cola announced a 9% dividend increase on Feb. 20, raising per-share payments from $0.28 to $0.305 quarterly. This was the company's 52nd consecutive year of growing dividends, so Coca-Cola has proven to investors that it has the fundamental strength and quality to consistently raise payments through good and bad times. The dividend yield is 3.2%, which is quite attractive for a rock-solid dividend juggernaut. 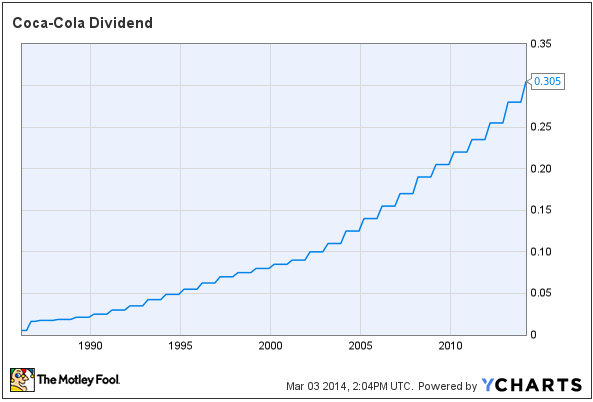 PepsiCo tastes good
PepsiCo owns 22 global brands generating more than $1 billion in annual revenue, and the company has successfully expanded into healthier product alternatives with brands including Tropicana, Quaker, and Gatorade over the last 10 to 15 years. This means PepsiCo is well positioned to continue thriving over the long term as people around the world pay increasing attention to the nutritional qualities of the food and drink they consume.

PepsiCo announced a big dividend increase of 15%, bringing the dividend yield to a tempting 3.3%. In addition, the company plans to repurchase approximately $5 billion in stock during 2014. Including both dividends and buybacks, PepsiCo intends to reward shareholders with $8.7 billion in capital distributions this year, which represents a mouthwatering increase of 35% from 2013. 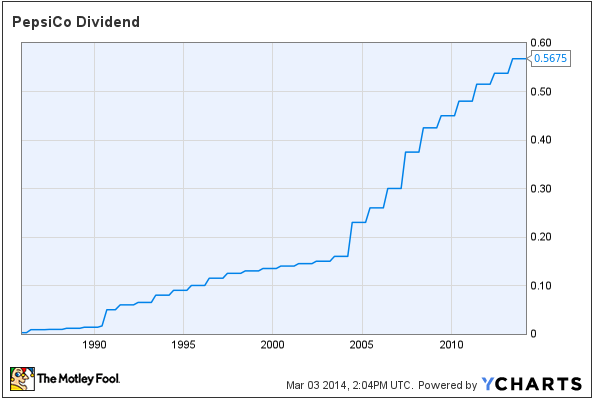 Wal-Mart's discounted dividend growth
Wal-Mart has delivered disappointing financial performance lately, the retail industry is going through a tough period, and long-term secular trends like the e-commerce boom represent a material challenge for the company. This is reflected in Wal-Mart´s dividend, which was increased by a lackluster 2% on Feb. 20.

The company is yielding 2.5% at current prices, so Wal-Mart doesn´t look like the best option for investors, either in terms of yield or dividend growth. Still, the big-box retailer has increased dividends for 41 consecutive years, and the payout ratio is below 40% of earnings, so Wal-Mart´s dividends are quite safe, even if they are not growing at a very exciting rate. 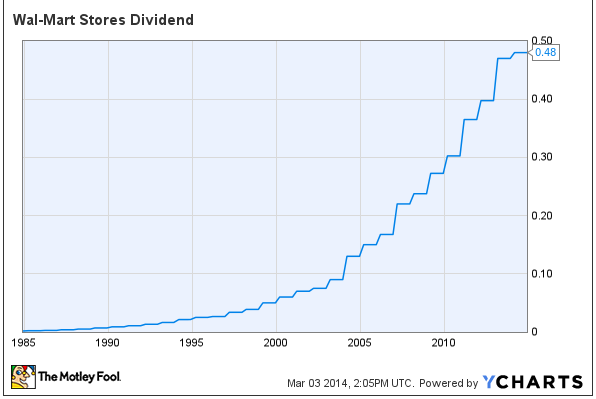 Ross Stores for smart shoppers
Ross Stores is the largest off-price apparel and home fashion chain in the U.S. The company leverages its scale advantages and geographic presence to make opportunistic inventory purchases and distribute the right merchandise to the most convenient locations in a timely and cost-efficient way. This allows Ross Stores to sell products at big discounts of between 20% and 70% off traditional retail prices.

On Feb. 27, Ross Stores announced a whopping 18% increase of its dividend, to $0.20 per share. The dividend yield is 1.1%, which is not particularly high. However, the company has a smart business model, and the payout ratio below 20% of earnings leaves plenty of room for dividend growth in the years ahead. 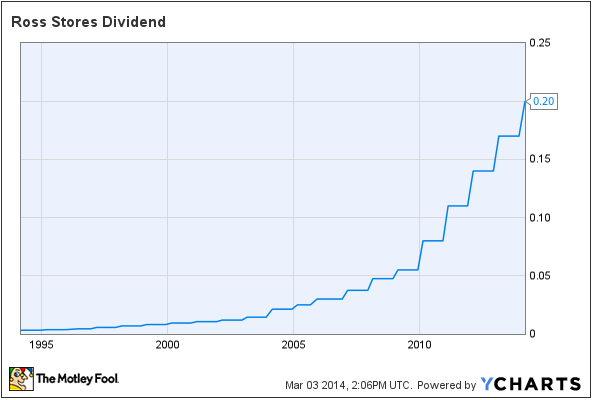 Home Depot is building growing dividends
Home Depot is benefiting from the real estate recovery, and management is doing a sound job of capitalizing on favorable conditions and generating strong performance for investors. The home improvement retailer reported an increase of 19.7% in adjusted earnings per share for the fourth quarter of fiscal 2013 on the back the strongest comparable sales figures Home Depot has seen in 14 years.

Home Depot announced a 21% increase in its dividend for fiscal 2014, which brings the dividend yield to 2.3%. The payout ratio is in the area of 40% of earnings, and the business is firing on all cylinders, so investors have valid reasons to expect growing distributions from the company in the years ahead. 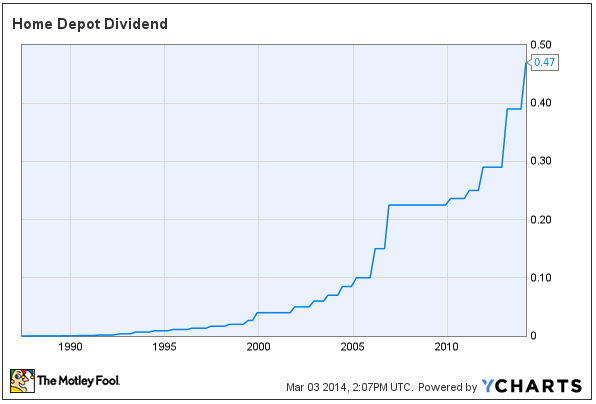 Foolish takeaway
Unlike earnings or other metrics that can be subject to manipulation, dividends don´t lie. Cash can be a clear and transparent indicator ofthe health of a business and management's vision of the future. For this reason, investing in companies with strong and sustainable dividend growth is one of the most effective strategies for superior returns over time, and cash distributions can provide remarkably valuable information when looking for the best investment alternatives.