With Bristol-Myers Squibb's (NYSE:BMY) new breakthrough approval for its dual hepatitis C regimen of daclatasvir and asunaprevir, the company may be buying itself a couple months of lead way to catch up to market leader Gilead for all-oral interferon-free combinations. This is the second breakthrough designation the FDA has granted to Bristol-Myers for a daclatasvir regimen, the first being a triple regimen of daclatasvir/asunaprevir/BMS-791325 for genotype 1 patients. This formulation is undergoing evaluation as a fixed-dose twice-a-day treatment.

The daclatasvir-asunaprevir combination targeted toward genotype 1b is currently in Phase III trials, and the combination was submitted for approval in Japan in October 2013. Daclatasvir is under accelerated review by the EMA for hepatitis C patients with compensated liver disease.

The combination of daclatasvir with sofosbuvir (the latter of which is marketed by Gilead as Sovaldi) is currently enrolling for Phase III trials in patients with unmet need.

Can anyone compete with Gilead?

Meanwhile, the undisputed leader in the field is Gilead (NASDAQ:GILD) with their $84,000 treatment Sovaldi and upcoming combination of Sovaldi and ledipasvir. The drug earned nearly $139.4 million in the first three weeks on the market last year with recently updated analyst projections of sales at $5-6 billion in sales for 2014.

Gilead itself has not made 2014 sales projections for Sovaldi, and at best CEO John Milligan played coy on the topic, saying only that the analyst projects are "not unreasonable math." The omission of concrete projections was actually met with a slight fall in shares, possibly spooking investors from being too optimistic. Shares have doubled in the past year, and there has been some speculation that such cash could make Gilead the second large biotech to offer a dividend. 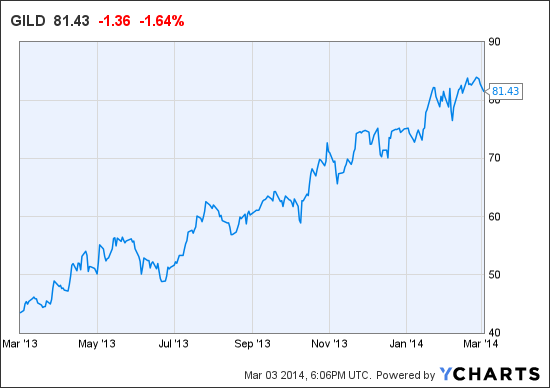 If Sovaldi did hit those numbers, it would be one of the most successful drug launches in history. However, the finish line is not necessarily in sight yet as the launch is still riddled with questions of which insurers would agree to cover the drug, especially as Gilead was slammed by criticism from the private and public sector alike on its hefty pricetag. So far, Milligan has stated that conversations with insurers have been positive.

The question of who will be willing to pay for the drug is a major one and will potentially set off future price wars among other competitors in the wake of Gilead's new combination filing for the single-pill, once-daily Sovaldi + ledipasvir combination earlier this month. Bristol-Myers aside, AbbVie (NYSE:ABBV) is a formidable player in the hepatitis C market. The company has a hepatitis C therapy that will likely be filed next quarter and come to market this year. Compared to Gilead's treatment, AbbVie's offers equal efficacy but a more complicated regimen for patients. Nonetheless, the likely lower price of AbbVie's therapy will make the exact market share difficult to predict.

Bottom line
Bristol-Myers and AbbVie both are rushing to close the gap behind leader Gilead. Bristol-Myers seems to be making the most headwind, and the breakthrough designation will likely accelerate approval a few months. While this sounds paltry in the big scheme of things, Gilead's Sovaldi sold nearly $140 million in less than a month, so the breakthrough designation certainly should not be discounted.