Please ensure Javascript is enabled for purposes of website accessibility
Free Article Join Over 1 Million Premium Members And Get More In-Depth Stock Guidance and Research
By Adrian Campos - Mar 3, 2014 at 11:00AM

Learn why Line, the largest social network in Japan, has become extremely popular in the past two years.

Nowadays, instant messaging applications are popular not only among mobile users, but also among investors. In the past few weeks, Japanese e-commerce giant Rakuten announced it was buying Viber for $900 million. Soon after, Facebook ( FB 2.40% ) announced it was buying WhatsApp in a massive deal worth $19 billion in cash and shares. With more than 450 million monthly users, WhatsApp was one of the largest messaging apps available, and made money by charging users a subscription fee of $1 per year.

With roughly 340 million users, Line could become the next acquisition target in the world of messaging apps. The app, launched in Japan in 2011, has experienced amazing growth, reaching 100 million users within 18 months, and 200 million users only six months later. As the larges social network in Japan, Line could be a great asset for Japanese telecom giant Softbank ( SFTBF -2.49% ). Accoding to Bloomberg, Softbank could be seeking to buy a stake in the promising app, which may be valued at as much as $14.9 billion, according to estimates of BNP Paribas. How did Line become so popular and valuable? 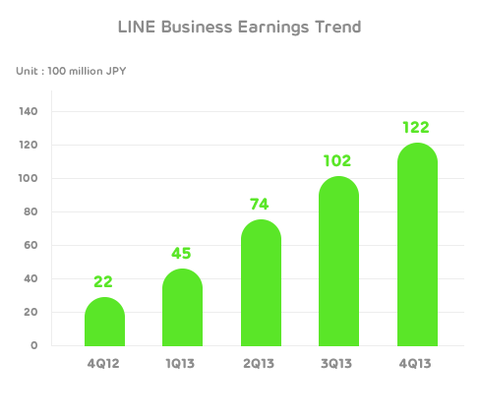 How selling stickers became a great business
Because there are dozens of free instant messaging apps, a company must create a highly differentiated product in order to succeed in this fierce space. In the case of Line, the company managed explosive growth thanks to the fact that it was optimized for mobile platforms from its early beginning, unlike Facebook and Skype, which were initially developed with PC users in mind.

The company also became well-known among mobile users for its virtual stickers, which are blown up emoticons featuring bears, rabbits, and other cute characters. The characters, designed in-house, are highly expressive, allowing users to send each other messages entirely expressed through these stickers. They have become so popular, in fact, that some users pay for premium stickers. In Japan, Line fans can buy toys featuring the app's characters in most shopping malls.

Thanks to its popular characters, Line was able to generate roughly $335 million in revenue last year from its core operations, which include selling games and stickers featuring its rich intellectual property.

The company is also well-known for constantly innovating its service. The company introduced a timeline and other social features in 2012. The timeline concept was also successfully used by Facebook to help users keep up with new messages and comments. More recently, the company opened its sticker business to its 340 million users in early February. Now, any user can create a sticker and sell it to other users for a 50% share of the profits.

From now on
Line, already very popular in Asia, has plenty of room for growth in Latin America, the U.S., and Europe. As the company continues gaining users, it could target a successful initial public offering in the medium run.

Note that the company could be a great partner to Softbank, which is currently the second largest mobile operator in Japan. With more than 200 subsidiaries and important stakes in Sprint, GungHo Online Entertainment, Yahoo! Japan, E*TRADE, Morningstar, and Ustream, Softbank is a massive group of promising companies and investments centered around mobile and Internet.

By purchasing a stake in Line, Softbank could explore interesting cross-selling opportunites among its services, which also include mobile games through GungHo, and e-commerce via Yahoo! Japan. It should be noted that Softbank has taken on a good amount of debt to finance some of its acquisitions. Recently, the company's bond risk climbed to a one-year high.

Final Foolish takeaway
From Facebook to Rakuten, Internet giants are buying messaging services as a fast way to add mobile users. With more than 300 million users, and a great business model based on selling stickers and games, Line appears to be on its way to file for a great public offering, or become the next big acquisition target in the mobile space.

3 Stocks to Buy as 'The Great Resignation' Steams Ahead