Cameco (NYSE:CCJ) is one of the best pure uranium plays out there. With Japan trying to restart its nuclear industry and China's growing use of nuclear power, things are looking up for the company and the industry as a whole.

The question still remains: Is Cameco's expensive valuation warranted? There is no question that Cameco is expensive with a price-to-earnings ratio of 30, but relative to other energy miners it is not extremely overpriced. 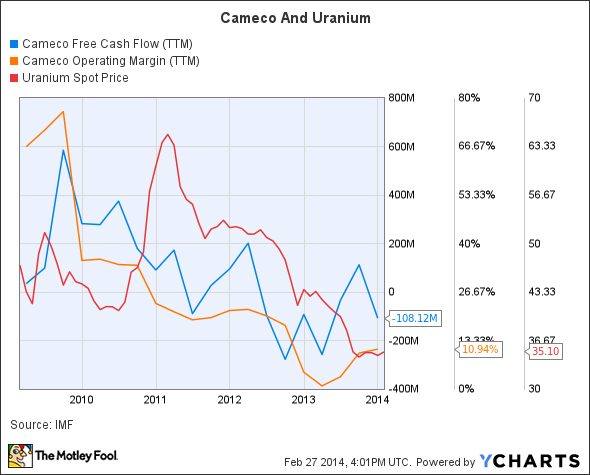 The bad news
It is clear from this chart that low prices are hurting Cameco. Its free cash flow has turned negative, and its operating margin of 10.9% is far below the operating margin it posted in 2011 and 2012. The downturn is taking its toll, and things need to improve before Cameco's earnings take an even bigger hit.

In the end it all depends on one thing: prices. Industry estimates point to a temporary rise in secondary sources and inventories as the main culprit for the recent price drop. The encouraging news is that demand is expected to continue growing consistently at least until 2025, eventually erasing the buildup in secondary supplies.

The valuation question
Uranium is not the only fuel source in town. In China coal continues to be a major player. Peabody Energy (OTC:BTU) is a top coal producer with mines on both sides of the Pacific and good access to the Asian market. Its problem is that strong Australian production has helped to depress coal prices and constrict U.S. margins. Miners are not too keen to shut down mines, so U.S. coal miners have created a generously supplied market with thin or non-existent margins.

Thanks to $528 million in write-downs for a number of non-operating and operating mines, Peabody posted a loss per share of $1.97 in 2013. The good news is that Peabody's normalized earnings without write-downs are positive.

Be careful with juniors
Cameco has challenges, but it is a $9.5 billion company with large and profitable assets. Denison Mines (NYSEMKT:DNN) is a smaller company with a number of developing assets. It owns 60% of the Wheeler River project, while Cameco owns 30% and JCU owns 10%.

Denison's problem is that it has had to increase its share count in recent years and hurt investors in the process. Finding other methods of finance is difficult, and yet Denison needs to keep drilling in order to develop its various properties. Between 2009 and 2012 its share count increased from 286 million to 385 million. Denison is a good miner to keep your eye on, but until the market significantly improves further dilution is expected.

Foolish bottom line
The medium- and long-term uranium market outlook is improving. This means that broad uranium funds like Global X Uranium ETF (NYSEMKT:URA) and its miners Denison Mines and Cameco have a strong future in store. With that being said the market can remain irrational longer than you can remain solvent.

Cameco is somewhat pricey, but it offers stability and earnings. You could directly invest in smaller companies like Denison or through the Global X Uranium ETF, but investing directly in Cameco is a safer choice given the short-term unknowns.