Sarepta Therapeutics (NASDAQ:SRPT) has been on a roller coaster ride as the opportunities and risks associated with its pipeline continue to be debated by investors. In my list of 2014 biotech predictions, I stated that I believe the stock is due for an early run this year, but will probably pull-back as a long, drawn-out path to approval for its main drug candidate eteplirsen becomes evident. Whether this will actually be the path that Sarepta takes remains to be seen, but investors will learn more about its future in the coming weeks as it awaits feedback from the FDA on its upcoming phase 3 trial design.

Before we examine what lies ahead for this fledgling biotech company, let's first review how Sarepta got to this point.

A look back
Sarepta, formerly called AVI BioPharma, began focusing on Duchenne muscular dystrophy (DMD) back in 2005 with the development of eteplirsen. The drug wasn't given much credit early on, and it wasn't until Sarepta began dosing patients in a small 12 patient 48-week phase 2 study that it started to get the market's attention. DMD is caused by the inability to produce the protein dystrophin, which leads to muscle degeneration and ultimately death. Eteplirsen is designed to allow the body to produce a workable form of dystrophin to help prevent muscle function decline. In April 2012, Sarepta reported interim 24 week data that eteplirsen had met one of two early primary endpoints in which the drug boosted dystrophin levels in boys in the trial. Later in July, Sarepta reported that at 36 weeks boys on the highest dose were walking further in a 6 minute walk test (6MWT) compared to those on placebo and had higher dystrophin levels. The stock really took off in October when Sarepta announced that both endpoints, dystrophin production and walking ability, met their primary endpoints. It seemed at the time like a home run, and the stock reacted as such, moving up 200% in a single day. 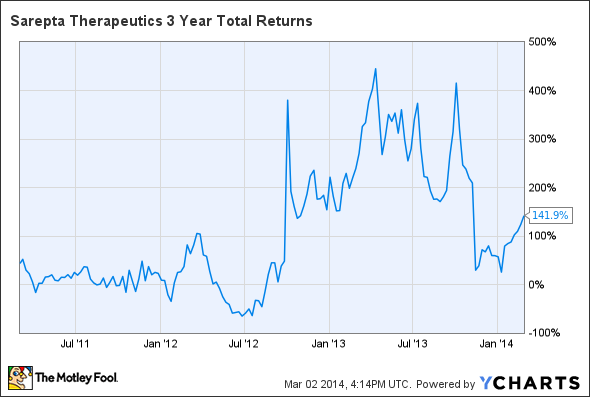 Digging a little deeper
Those were the good days for Sarepta. Data that seemed potentially good enough to warrant an early approval via the FDA's accelerated approval pathway were seemingly shot down on grounds that the trial was too small and the measurement and clinical relevance of dystrophin as a surrogate endpoint (as is the case with accelerated approvals) was questioned. Also, the fact that Sarepta's biggest competitor, Prosensa, had just failed a phase 3 trial with a similar "exon skipping" drug. Prosensa, partnered with GlaxoSmithKline at the time, failed to show any benefit in a larger phase 3 placebo controlled trial with its DMD drug called drisapersen. Ultimately, Glaxo returned all rights of drisapersen back to Prosensa, dealing another blow to investors' confidence in exon skipping technology.

So where does Sarepta stand right now?
On the earnings call on Thursday, Sarepta indicated that they are waiting to hear back from the FDA on how a phase 3 trial should be designed and what an approval pathway might look like. It recently increased its manufacturing capabilities by ramping up production of eteplirsen for future trials and have continued to advance other preclinical programs. I predicted that Sarepta would have an early run this year on renewed hopes that the FDA will reconsider its stance on accepting a NDA filing of eteplirsen for DMD. Sarepta has quickly worked its way higher this year and is now up 42%. The company continues to announce results from its phase 2 extension study that garnered so much hype, having just released the 120 week results. There continues to be strong support from DMD advocate groups to get the FDA to move quickly in getting the drug approved. Additionally, Sarepta continues to hint that the window is not closed yet for an earlier than expected approval.

This feedback from the FDA is setting up to potentially be a very important milestone in Sarepta's history. If the FDA shows a willingness to approve eteplirsen faster than many expect, shares could skyrocket. Short interest has built up to 39.8% of the float, so any positive news could send Sarepta's shares up on massive short covering. Sarepta plans to file applications on two investigational new drugs targeting different exons in muscular dystrophy this year as well. If the FDA appears more lenient with regards to etepirsen, it could create even more excitement around Sarepta's other pipeline candidates.  Alternatively, if the FDA comes back as expected, in which a large placebo controlled trial must show 6MWT benefit over 1 or even 2 years, then its possible that Sarepta's shares take a big hit as reality sets in that it may not see approval until 2016 or 2017 at the earliest. The March $29 straddle, which involves being long both a call and put option with a $29 exercise price, is implying a $7.00, or 24% price move. In this case, the straddle would be profitable if Sarepta is below $22 or above $36 by the March expiration.

So this prediction is still on track. Sarepta will certainly be a stock to watch over the coming weeks when the FDA provides feedback on eteplirsen. I ultimately believe that the FDA will stick to its guns and demand a study that can definitively prove eteplirsen works. I'm optimistic that the drug can work, but I believe there will be better entry points to get long this stock in the near future.