A recent study found a banking revolution is under way, and the winners will see a massive gains over those that do not adapt quickly enough.

In a report by Accenture, titled "The Everyday Bank: How Digital Is Revolutionizing Banking and the Customer Ecosystem," the consulting firm says "banks are at a crossroads," and banks will soon be viewed as either an essential element to the everyday activities of consumers, or simply a provider of transactions.

And those banks falling into the second category could risk losing up to 30% of their revenues, while the others could see pre-tax profits rise to 135% over current levels: 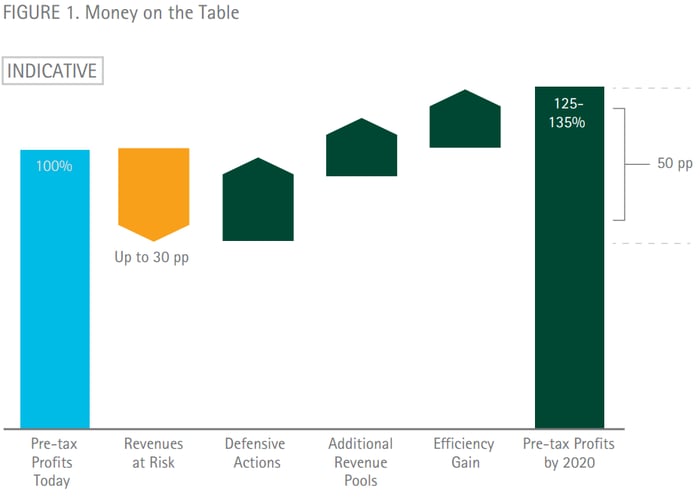 These changes could mean big things not only to banks such as Bank of America (NYSE:BAC) and JPMorgan Chase (NYSE:JPM) but also names such as Capital One (NYSE:COF) or Huntington Bancshares (NASDAQ:HBAN), and even smaller ones such as Bank of Internet (NYSE:AX).

Massive change
The study from Accenture stated that as "technology drives dramatic changes in consumer behaviors and expectations, it uproots traditional transactions for all players -- including banks."

In 2012, 20% of customers changed one or more of all their retail banking relationships as a result of heightened expectations from the technology services provided by banks.

Generations of consumers want quicker and easier access to their data and information through technology, and as a result there is a possibility for new entrants to take market share, but also greater opportunity for banks to entrench themselves at the center of their customers' financial lives.

Yet while this may sound intimidating, the banks able to do so could see huge gains in profits.

Powerful examples
Consider the example of Huntington Bancshares, which has seen its consumers with six or more relationships with the bank -- through checking, savings, credit cards, mortgage, brokerage accounts, or others -- grow from just 41.1% of customers at the end of 2011 to 47.7% of customers at the end of 2013. Huntington says this creation of the "optimal customer relationship," is at the core of its actions, but vitally it drives "higher customer profitability."

There is also the example of Capital One, which, through its acquisition of online-only ING Direct (now Capital One 360) in 2012, has endeavored to supplant itself as the place for online banking. At a recent investor presentation, the company said one of its priorities in its consumer banking operations was simply "digital leadership," which underlines why it made the move in the first place.

Yet perhaps the best example of this change may be Internet-only Bank of Internet, which has seen its deposits balloon from less than $1 billion to $2.4 billion since 2010: 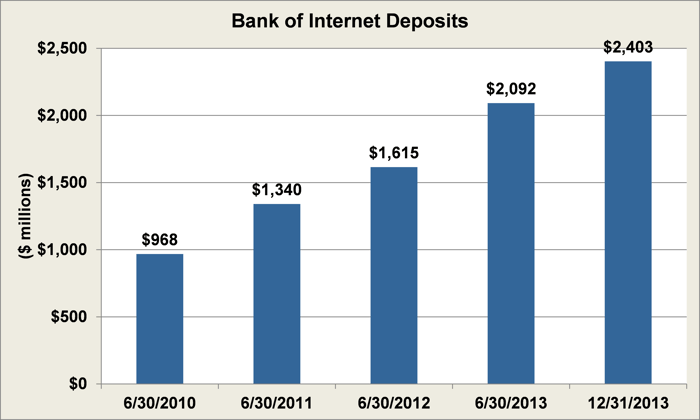 With returns on average assets and equity of 1.54% and 17.1% at Bank of Internet dramatically outpacing its peer average of 0.68% and 3.9% thanks to its wildly efficient and profitable operations, there is perhaps no greater example of the potential awaiting banks than Bank of Internet.

The biggest banks have also been responsive to this change. Bank of America has made massive efforts to expand its customers' use of its mobile app, and has been met with great success. Its active mobile banking accounts has risen by almost 60% over 2011 levels: 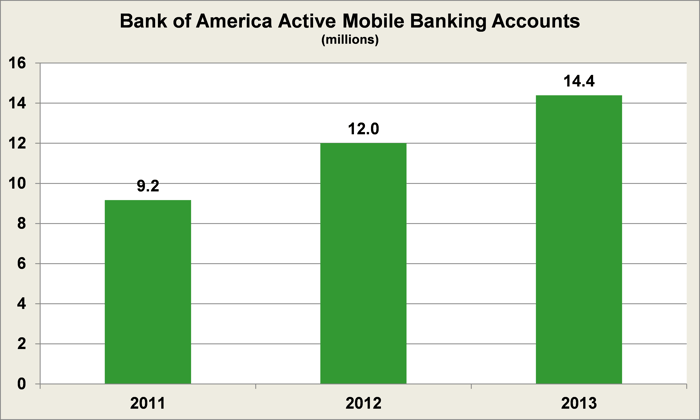 The reason Bank of America has had so much success in its efforts is because it has heavily invested in its mobile technology. Bank of America spent close to half a billion dollars over the past three to four years and will continue to invest at that rate into the future.

JPMorgan Chase also recently revealed that it has seen its digital customer log-ins rise by 28% annually relative to 2010, while at the same time its teller transactions and calls logged to those in its call centers have fallen by 4% and 3%, respectively.

Massive potential
The benefits of these transactions are twofold. This type of service will ultimately reduce expenses. Yet as Accenture notes, the banks that deliver the best experiences to their customers through these greater points of contact will also be able to "count on deeper customer relationships," which will lead to greater revenues and "increased profits." There will be gains realized across revenues, expenses, which will lead to massive growth in income.