No, the wind-turbine maker didn't get a windfall, but one piece of news from China was enough to attract frantic buyers in the stock. China is about to take its wind-power leadership to an all-new level by approving 27.6 gigawatts of new capacity installations through 2015. As one of the top five wind-turbine manufacturers in terms of market share (based on new installations), China Ming Yang certainly stands to benefit.

But how big is the opportunity, really? Is it big enough to justify the eye-popping rally in Ming Yang stock? If you're a Ming Yang investor, you must know the answer.

Yes, it's big, but ...
A quick look at the pending projects (which will form a part of the 27.6 GW plan) shows that a good number of them belong to state-owned electric power companies, such as Huadian and Huaneng. Now consider this: The two power companies alone accounted for 30% of the total orders that Ming Yang booked during the nine months ended September 30, 2013. Here's a bigger one: Nearly 53% of Ming Yang's total revenue comes from China's five largest state-owned power companies, including the two I mentioned. In other words, China's wind power push should mean more orders for Ming Yang, which is essential to help the company break even.

But there's a catch, Actually, there are two.

The fight is getting uglier
The wind power market in China is highly competitive, and several companies are in the race to grab a bigger share of the pie. Here's how Ming Yang stacks up against its peers in the domestic market. 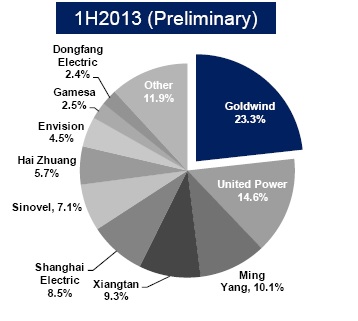 The chart shows the market share of wind-turbine companies in China during the first half of 2013. Ming Yang holds a good 10% of the market right now, but competition for a spot on top five is getting hotter than ever. For instance, both Xiangtan and Shanghai Electric gained more than two percentage points each in market share during the first six months of 2013 to move up the ladder. And as you can see, industry leader Goldwind too is growing rapidly. Industry expert  even expect Goldwind to be a major beneficiary of the 27.6 GW plan since more than 50% of the projects awaiting approval are located in the region where the company is based out of.

Moreover, competition isn't restricted to local rivals. Global leader in wind power General Electric (NYSE:GE) ended its joint venture with one of China's leading power-equipment companies, Harbin last year, but it continues to operate independently in the market. The 27.6 GW push could just encourage General Electric to pay more attention to the Chinese market. GE has already ventured into Japan, is among the leading wind companies in India, and is even eyeing Pakistan. Likewise, Denmark- based Vestas, which is the world's second-largest wind-turbine company after GE, is gaining traction in China at a rapid pace - it grabbed 3% market share in 2012.

The point I am trying to drive home is that if the opportunity in China is big, the competition is bigger. Ming Yang may have made it to the list of top 10 wind-turbine makers in the world, but sustaining that position could be an uphill task.

One key reason Goldwind is higher up on the preceding chart is its strengthening foothold in high-potential international markets like North America and Australia. Nearly 12% of Goldwind's total revenue in 2012 came from overseas markets. Comparatively, Ming Yang has negligible international presence. Though it has ventured into Romania and India, there's much to be done.

But limited global reach isn't the biggest hurdle in Ming Yang's growth path. The company has a much bigger, and serious, problem at hand to tackle.

Ming Yang is a loss-making company. That wouldn't be a major issue if you were confident that a swelling order book and growing top line should push the company faster toward profitability. The problem is that Ming Yang is actually struggling to convert incremental sales into profits. Just look at the losses and wild swings in the company's margins above. Consider that its revenue grew 20% between Q2 2012 and Q3 2013.

Clearly, management has yet to learn the tricks of cost control -- Ming Yang's transportation and selling charges shot up a staggering 85% during the third quarter, while administrative expenses jumped 40% year over year. What can external drivers do when a company lacks internal control?

The worst part: Ming Yang follows an absurd policy of not providing any financial forecasts. Or is it that management itself has no clue when the company will turn profitable? Well, if the market considers China's wind drive to be such a huge opportunity for Ming Yang, it's time management starts quantifying and extrapolating them to some meaningful estimates. Today's drop in Ming Yang stock may be plain profit booking, but prudent investors have better reasons to exit crazy pops.