The picture just keeps looking more interesting for Netflix (NASDAQ:NFLX) these days. After announcing on Feb. 23 that the company struck a deal with Comcast (NASDAQ:CMCSA) so that it could receive faster broadband speed, broadband provider Verizon Communications (NYSE:VZ) stated that it, too, was expecting to close a deal with the streaming service.

Now, however, another big fish in the market has come to play: AT&T (NYSE:T). With all of these big broadband servicers coming out of the woodwork and all but demanding deals with Netflix, what does this mean for the company's customers and shareholders? Is Netflix likely to thrive under this new ecosystem, or will it impair the business's performance?

Get money, get paid!
After the DC Circuit Court struck down a policy by the FCC that stipulated that Internet service providers could not discriminate against companies using online data, the possibility of deals between providers like Comcast and users like Netflix became very likely. Although both parties were in discussion over a potential deal for several months, no agreement was reached until after the ruling became final.

In a nutshell, Netflix (which has been faced with customers complaining about its slow load times) will pay Comcast an undisclosed sum in exchange for greater network capacity. Unfortunately, the terms of the agreement were not disclosed, but both parties believe that the deal will prove mutually beneficial.

Irrespective of this, shareholders should expect some downside for Netflix in the short term. At first, the deal will force the streaming service to pay some amount to Comcast for the faster speeds. In the long run, the faster service time will likely draw customers to Netflix and increase the company's revenue; in the short term, however, it will almost certainly hurt its profitability.

Comcast isn't the only beneficiary! 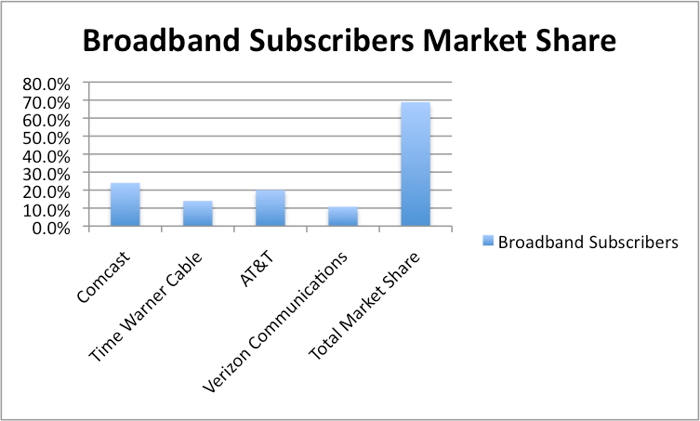 As we can see in the graph above, Comcast is the largest company in the broadband service industry. With a 24% market share (by subscriber count), the company eclipses all of its peers with the exception of AT&T which holds a 20% stake in the sector. However, if Comcast does succeed in finalizing its all-stock merger with Time Warner Cable, the combined entity will control roughly 38% of broadband subscribers.

When put this way, it's not too hard to imagine why Netflix would strike up a deal with it instead of other businesses like AT&T or Verizon. By coming to an agreement with the largest player in the industry and by keeping quiet about the terms, it grants Netflix leverage in negotiating with other service providers.

Will this mean tougher times for Netflix?
Although Netflix will likely benefit from its arrangement with Comcast when it comes to the negotiating table, there's no guarantee that either AT&T or Verizon will give the company great terms. Collectively, the two companies comprise almost 31% of broadband subscribers. This suggests that they will have considerable pull at the end of the day.

If Netflix was an extremely profitable business, any deal between it and its providers probably wouldn't put too much of a dent on its bottom line. Unfortunately, this isn't the case. Over the past five years, Netflix did succeed in growing its revenue by 162% from $1.7 billion to $4.4 billion, but its net income actually shrank by 3% from $115.9 million to $112.4 million.

The primary driver behind the company's lackluster profitability has been a significant increase in costs. Between 2009 and 2013, the company saw its cost of revenue rise from 64.6% of sales to 70.5%, while its research and development rose from 6.9% of sales to 8.7%. For the most part, its rise in costs came about because of higher content costs.

Foolish takeaway
Based on the data above, it looks like Netflix made a nice strategic move in closing a deal with Comcast. In the short term, the deal will probably harm Netflix's profitability while helping Comcast's, but the long-term benefits are clear. The real trick is how the business will use its agreement with Comcast to close attractive deals with Verizon and AT&T, both of whom have greater market power than Netflix.

Furthermore, the Foolish investor should keep in mind that while the short-term fall in profits for Netflix will probably be made up for through higher subscriber revenue, the business is already in a position where increasing its profits is near impossible. If the deals the business strikes with Verizon and AT&T aren't as attractive as the company made its agreement with Comcast out to be, it could be forced to raise prices or let investors know they will have to deal with lower profits.