The Dow Jones Industrial Average (DJINDICES:^DJI) was trading nearly 160 points lower, down 0.98%, at 3 p.m. EST as tensions continue to escalate in Ukraine. On the bright side for economic data, the Institute for Supply Management's manufacturing purchasing managers' index jumped to 53.2 in February after slipping to 51.3 in January. That 51 mark was just above the 50 threshold that reflects expanding activity in the economy. The U.S. winter weather had a negative impact on January's reading, and the effects are still being felt in the automotive industry. Here are some highlights from today's release of industry sales numbers for February and one thing for investors to watch going forward.

By the numbers
Not all of the auto industry has reported full U.S. sales figures yet, but judging by what has come in so far investors can expect February to increase its seasonally adjusted annualized rate, or SAAR, from last year.

Chrysler and Nissan led the industry last month in sales increases, with 11% and 16% improvements, respectively. On the other end, Detroit's largest two automakers, Ford (NYSE:F) and General Motors (NYSE:GM), posted respective sales declines of 6% and 1%. Toyota (NYSE:TM) rounded out the largest automakers in the U.S. market with a 4.3% decline in sales. The official SAAR numbers won't be reported until later today, but however, the industry's rate is expected to rise from 15.3 million vehicles for February 2013 to 15.4 million last month. While that isn't a staggering increase, it holds true to the trend of consistently rising demand. 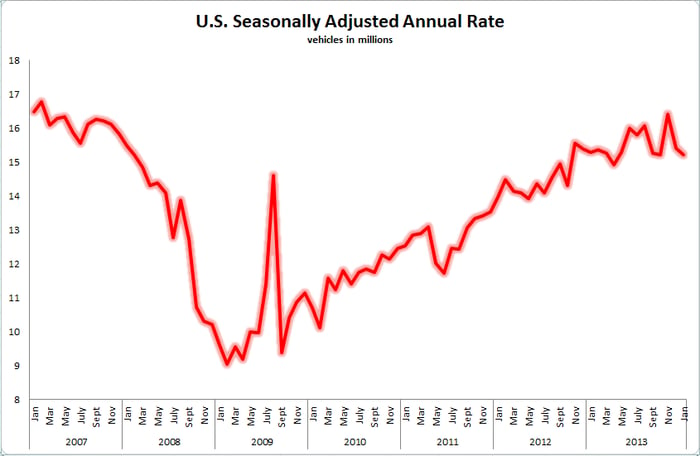 When looking at sales trends in the automotive industry it's usually best to look at three-month chunks. Using that advice, March will have to be a strong month for most automakers after January and February sales were softened by harsh weather. Alec Gutierrez, a senior analyst at Kelley Blue Book, is optimistic.

"Heading into February, our expectations were very low, we were expecting another down month, similar to what we saw in January," said Gutierrez, according to Automotive News. "Given some of the challenges that we saw with the month, I would classify this as a good month for the industry and sets us up for a very strong March."

As automakers head into the historically strong spring selling season, there will be one critical factor for investors to watch: sales of full-size pickups.

Truck wars
Sales of full-size trucks are critical is because they represent the most profitable segment in the U.S. market. Ford's F-Series, Chevrolet's Silverado, and Dodge's Ram trucks offer their respective companies the fastest way to gain market share and profits.

This is where things get a little tricky. Typically, fresh designs of the trucks sell better, command higher transaction prices, and improve profits. The freshest pickups are easily Chevrolet's Silverado and GMC's Sierra, both under General Motors' umbrella of brands. Unfortunately for GM investors, sales haven't picked up even with the fresh redesigns. Sales of the Silverado were down 12% in February and are down 15% for the year. Sales of the GMC Sierra are also down 6% this year.

With sales of the Silverado in decline, Ford hasn't been forced to up its incentives on the F-Series to remain competitive -- allowing for greater profit. The Blue Oval has kept its incentive spending per truck around its historical norm of $4,000. Sales of the F-Series rose 2.6% last month, which was was Ford's best February in the last eight years. Meanwhile, Chrysler's Dodge Ram truck sales soared 26% higher last month.

GM originally wanted to keep incentive spending on trucks lower to command higher profits, but at what point does the company have to say higher profits aren't worth losing this much market share? The answer points to right about now. GM is unleashing its steepest discounts on the Silverado in March and will aim to take advantage of this month's five weekends to boost sales. It is offering employee and supplier pricing to any willing car buyers.

This is GM's small window of opportunity to convince consumers to buy a Silverado before Ford's next-generation F-150 hits the showrooms later this year. I believe overall industry demand will snap back after the winter decline, and watching sales of full-size pickups in March will give investors a slight edge in knowing the winners and losers before the automakers report first-quarter earnings.