The week of Feb. 23 was a great week for many retailers! Given how well some of these companies performed, it's clear that Mr. Market has high expectations for them moving forward. For this reason, is it possible that these businesses can rock your portfolio during 2014 and beyond, or is now a great time to sell and walk away? 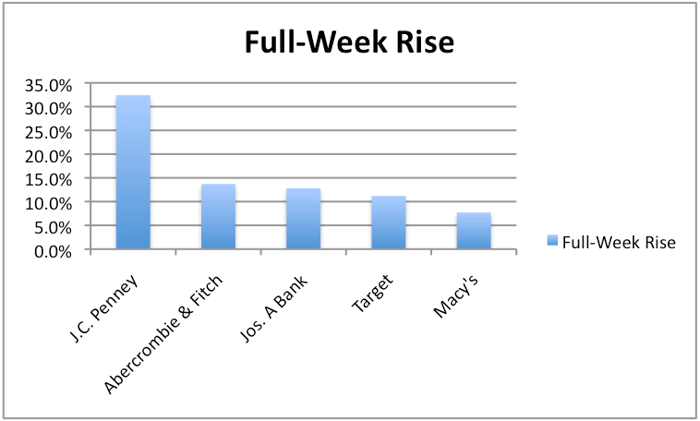 J.C. Penney's strong quarter wooed Mr. Market
For the week, shares of J.C. Penney (OTC:JCPN.Q) soared a whopping 32% to close at $7.28 after the company reported attractive earnings for the fourth quarter of its 2013 fiscal year. Currently, shares are up 49% from their 52-week low. But with the stock trading at a 63% discount to its 52-week high, there's still plenty of upside potential.

During the quarter, the struggling retailer saw its revenue come in at $3.78 billion. Although this fell short of the $3.86 billion analysts expected, the company's cost-cutting efforts were successful; the retailer reported earnings per share of $0.11. This greatly surpassed the $0.82 loss per share forecast by Wall Street and crushed the $2.51 loss the company earned in the year-ago quarter.

Bad news was never received so well
Another highflier this past week was Abercrombie & Fitch (NYSE:ANF). After the company reported earnings of $0.85 per share for the quarter, shares rose 11% on Wednesday, making the stock's full-week appreciation almost 14%. This level of earnings represents a significant decline from the $1.95 per share the company reported in the year-ago quarter, but it was the business' adjusted earnings that had Mr. Market enthusiastic.

At $1.34 per share, Abercrombie & Fitch's adjusted earnings exceeded the $1.03 per share that analysts expected. Although this is still lower than what the company reported a year earlier, investors hope that this, combined with the 6% drop in sales for the quarter, may be a sign that the company's deterioration is slowing down.

Time to go suit shopping
One of the strongest retailer winners for the week was Jos. A. Bank (NASDAQ: JOSB). Shares of the suit store rose 9% on Monday and 13% for the week after news broke that larger competitor Men's Wearhouse had offered to buy the company for approximately $1.8 billion. The offer was the third of its kind and was initiated in the hopes that Jos. A. Bank would sell out as opposed to acquiring Eddie Bauer for $827.2 million.

In response to the proposed acquisition, Jos. A. Bank's management released a statement on Feb. 27 stating that they found the offer inadequate. However, the door was kept open by the company's board, which authorized a meeting with Men's Wearhouse to see the maximum price the company might pay. The two companies are now in talks to consider a potential merger. 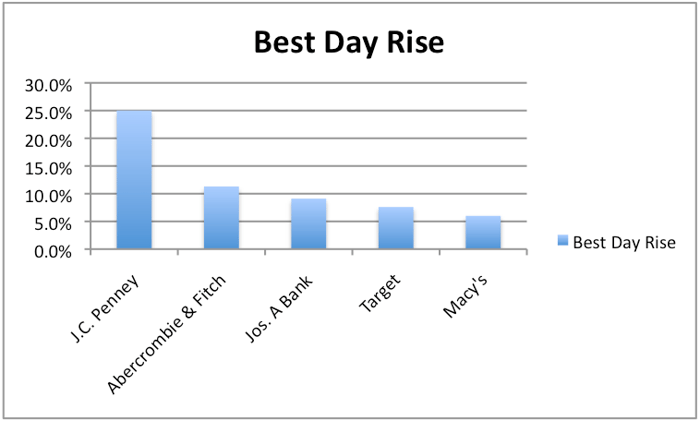 Target defies the odds
Despite being hit by news of a data breach, whereby customers' credit information was exposed to unauthorized parties, Target (NYSE:TGT) defied the odds. It reported a quarter that, while bad, beat analyst expectations and sent shares 11% higher for the week.

For the quarter, the retail giant reported revenue of $21.5 billion. This represents a 5% decline compared to the $22.7 billion that management reported in the year-ago quarter and was due, mostly, to a 2.5% drop in comparable-store sales.

Looking at profitability, the business' results were even worse. For the quarter, earnings per share came in at $0.81. While this represents a 45% decline from the $1.47 the company reported in the year-ago quarter, it beat the $0.79 that analysts forecast.

Macy's blew past the competition... again
Over the past few years, Macy's (NYSE:M) has reported astonishing bottom-line growth, and it just keeps getting better. For the quarter, Macy's reported a 2.3% rise in comparable-store sales (inclusive of its store-within-a-store concepts). While this is certainly good, it's far from great. What really got investors' attention, though, was the rise in profits.

For its fourth quarter, Macy's reported earnings per share of $2.16. This means that the company's earnings rose 18% from the $1.83 management reported in the year-ago quarter. The company benefited from a 6% reduction in share count combined with an 11% jump in net income. In part, this rise was driven by higher sales, but it was also attributable to a drop in costs in relation to sales. All of this great news sent shares soaring nearly 8% for the week

Foolish takeaway
It's impossible to say whether a company will make an excellent long-term investment based solely on a week of share-price performance. However, when a company's shares do rise, it means that Mr. Market is paying attention to what is going on with the business in question.

For this reason alone, the Foolish investor should keep a watchful eye on each of these businesses and assess whether any of them still fall in the undervalued range. If so, now may be a prime time to buy.