Most of the past century's major wars have been pretty good to American markets, unless U.S. forces get drawn into all-consuming conflicts or long-running quagmires.

Investors are really happy to hear that Vladimir Putin might be put out of Ukraine. The Dow Jones Industrial Average ( ^DJI -0.76% ) closed up 1.4% today, with all 30 components in positive territory, after comments from the Russian president reduced worries about a potential military conflict in Ukraine. The markets, it seems, don't want a war -- but is this a justified fear in the first place?

After a century of titanic conflicts and interminable global skirmishes, much of the world is understandably wary of another war. The Polynational War Memorial counts 249 wars since 1900, with as many as 113 million recorded casualties (not counting the death figures for noncombatants, which are much higher). Some conflicts stretch on for decades, while others are resolved in one brief explosion of violence, but part of the world has been at war with another part without any real cessation since the turn of the 20th century.

Despite this constant warfare, the Dow is far higher today than it was in 1900, despite passing through two World Wars, the Cold War, and the ongoing War on Terror that seems to have no end. Has any major conflict so much as put a damper on the Dow's growth? Let's see.

Female Russian soldier (disguised as a man) firing on advancing Japanese troops, 1904 or 1905.

Russo-Japanese War (1904-1905)
Called "the first great war of the 20th century," this conflict was directly responsible for the collapse of Imperial Russia and the rise of Imperial Japan during the first half of the century. Russia's eastward expansion ran up against Japan's ambitions in China and other Asian nations, which caused ongoing tension that exploded into outright war on Feb. 8, 1904. By the end of war by treaty on Sept. 5, 1905, roughly 150,000 soldiers had died and a revolution had erupted in Russia that served as precursor to the 1917 revolution that brought Lenin and the Soviets to power. Japan won, but it did not gain much territory, which brewed a long-running resentment among Japanese militarists that led to further expansion efforts in the years preceding World War II.

The Dow grew by 68% over the course of this war, which remains one of its best performances of all time. The bull market ended several months later, perhaps as a result of diminished wartime spending -- American industrial output soared from 1903 to 1906.

World War I (1914-1918, with two major revolutions)
This war occasioned one of the strangest periods in American stock market history -- three days after the war erupted following Archduke Franz Ferdinand's assassination, all trading was stopped in an effort to prevent panicked European withdrawals. The market shutdown lasted an unprecedented four months, and when exchanges reopened, floor traders greeted the opening bell with a raucous cheer and a flurry of buy orders.

The war itself was a brutal, epochal event that ended more than 16 million lives and set the stage for the Second World War two decades later. Other major conflicts erupted or intensified during this period -- the Russian Revolution of 1917 created a Soviet state that persisted for much of the 20th century, while the Mexican Revolution also entered a bloodier phase around the same time as war broke out in Europe. Many belligerent nations exited the war with greatly diminished economies and shattered manufacturing capacity, but the United States' distance from the battlefields gave it an economic edge. Much of the war materiel supplied to Allied forces came from American factories, so many of these industrial leaders enjoyed huge wartime gains.

From the reopening of markets in November 1914 to the 1919 signing of the Treaty of Versailles, the Dow grew by 88%. DuPont ( DD ) became one of the greatest American beneficiaries of the war, as it produced roughly 40% of all Allied munitions from 1914 to 1918. Giant U.S. Steel ( X -0.40% ) saw its share price double from the resumption of trading to the signing of the peace treaty as well.

The Russian civil war was not quite so beneficial for American markets, however -- from the onset of rebellion in early 1917 to the creation of the USSR at the end of 1922, the Dow only rose 6%. This was likely due in large part to the end of the automaker-stock bubble in 1919, as a recovery didn't begin until the summer of 1921.

World War II (1939-1945, with many conflicts preceding)
Several major wars were fought years before the outbreak of World War II, with the first major outbreak of post-World-War-I conflict erupting in China beginning in the spring of 1927 as communists rebelled against the nation's governing republic. This conflict had minimal impact on the Dow, which was in the latter stages of its record-breaking Roaring '20s bull market, but it did push the militaristic Japanese empire to invade Manchuria in 1931. Italy invaded Ethiopia in 1935, and by the time the Fascists "pacified" the country a year later the Dow had grown by 20%.

The Spanish Civil War, which served as a proxy conflict between the Axis and the Allied powers, began shortly after the end of Ethiopian hostilities and continued until 1939. While this civil war raged, the Japanese began open war with China, which would last until the end of World War II. These conflicts occurred during a period of weakness for the Dow, as the index fell by 19% between the start and the end of the Spanish Civil War. Widespread concern over a larger conflict likely played a part in market weakness as well, since Nazi Germany began rearming in 1935 and had already annexed parts of several other nations by the time Spain's civil war ended.

World War II itself had a rather muted impact on the Dow, as the index grew by 29% over the six-year span of open hostilities between Axis and Allied powers. The war was so all-consuming that the profit motive was all but eliminated for American industrial concerns, even as they managed to crank out materiel by the metric ton day after day after day. It's unlikely that we'll ever see a war of this magnitude ever again.

Korean War (1950-1953)
The first open conflict of the Cold War era was also one of its bloodiest, as an estimated 2.5 million civilians were killed or wounded in addition to what might have been as many as 900,000 combat deaths (records for North Korean losses vary widely). The Dow lost more than 4% of its value on its first trading day after the war began, but from that point to the conflict's end in 1953 the blue-chip index grew by 26%. This war occurred early in the first major postwar bull market, which finally pushed the Dow past its 1929 highs a year after the end of the Korean War.

Vietnam War (1956-1975)
This war stretched on for so long that you might expect to see little impact on the markets, but that's not quite how things went. America's direct military involvement only began in mid-1961 when President John F. Kennedy sent special forces to the country to train the South Vietnamese, and full-scale warfare wouldn't begin until 1964, with U.S. withdrawal completed in 1973. Let's look at how the Dow performed during these various time frames:

U.S. Army troops on a break during patrol duty in Vietnam.

The time frames from 1964 onward may be the most accurate for our purposes, as it wasn't until after American escalation under President Lyndon B. Johnson that Vietnam became a flashpoint for political pundits and market-watchers. In fact, a bear market that lasted from 1968 to 1970 has been partly blamed on widespread unrest over the war, which is one of the few times that a regional war pursued by the United States has produced a direct market response. On the most relevant timelines, the Vietnam war was a terrible time for American investors -- to say nothing of the conditions faced by U.S. troops abroad or at home once they finally returned.

Soviet War in Afghanistan (1979-1989)
This war might be one of the closest parallels to the present conflict in Crimea, as it was instigated by expansionist Russians and opposed by many Western nations. An estimated 1.8 million people lost their lives during the conflict, but an absence of American military involvement in what was largely the communists' Vietnam made this less impactful on American markets than many other major wars. The Soviet failure in Afghanistan also helped speed the collapse of the USSR, which fell apart a mere two years after it pulled out of the war. The Dow grew by 175% over the course of the war, which happened to rather neatly coincide with the first half of the baby boom's generational bull market.

War on Terror (2001-present, major operations ended by 2011)
The conflicts in Afghanistan and Iraq tend to go hand in hand in public perception, so we'll examine them as a single global fight in the "War on Terror" that began after the attacks of Sept. 11, 2011. Since the first strikes of Operation Enduring Freedom in Afghanistan on Oct. 7, 2001, more than 1 million people  (mostly Iraqi civilians) have lost their lives, and the United States spent well more than $1 trillion on the war (not including indirect or long-term costs) during its first decade. While the war is still technically ongoing, American operations in Iraq ended in December 2011, and Afghanistan assumed control of its internal security in June 2013. We can assess the Dow's changes on both timelines:

The start and end of the War on Terror correspond to two major bear markets. The events of Sept. 11 actually exacerbated a decline already under way following the end of the dot-com boom, and the financial crisis of 2008 forced American leadership to reevaluate its prosecution of the war as government spending became more important at home. Investors did benefit from increased military spending -- Boeing ( BA -2.74% ) and Lockheed Martin ( LMT 0.71% ), America's two largest defense contractors, each posted gains that more than tripled the Dow's return from 2001 to 2013, while third- and fourth-place contractors Northrop Grumman and General Dynamics each came close to doubling the Dow's return: 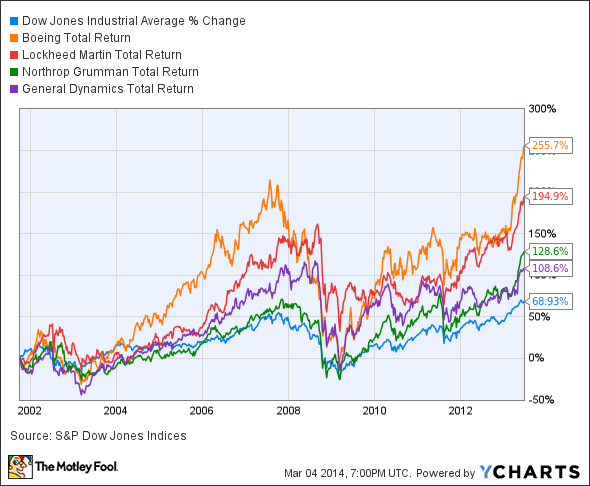 Does war necessarily mean bad times for investors? As we've seen, that's hardly the case -- unless American troops wind up involved in wars without end or a clear path to victory. When the United States stays out of major conflicts, it tends to be better for the market, which is something to keep in mind before agitating for military intervention in someone else's fight.