Samsung says it's going to take over the (chip) world, but can it really afford to?

Samsung (NASDAQOTH: SSNLF) has been talking a rather big game with respect to its growing foundry business. In various investor conferences, the company has repeatedly claimed that it is aiming to be the world's top foundry and will transition to new technologies at a lightning pace. While such aggressive claims are always great for investor morale, it's important to understand that Samsung -- in the scheme of the semiconductor logic foundry business -- just isn't very significant.

What's the pecking order?
According to IC Insights, the largest player, by far, is Taiwan Semiconductor ( TSM -0.43% ), which did nearly $20 billion in foundry revenue during 2013. Global Foundries is a distant second with about $4.2 billion, the struggling United Microelectronics is third, and Samsung is fourth at just shy of $4 billion. Notice that even with all of the Apple business to date, as well as some business from the likes of Qualcomm (traditionally TSMC customers), the company is still just barely pushing the $4 billion mark.

Compared to TSMC, Samsung is downright small, and compared to the world's largest semiconductor company, Intel, which does $50 billion per year in semiconductor sales, both of them combined are still no match. What's even worse for Samsung is that the majority of its foundry revenue, derived from its relationship with Apple, is likely to plummet unless it can sign on a significant number of new customers to make up for what is, at best, a second source to TSMC and, at worst, a complete ousting from the Apple A-chip supply chain.

Is Samsung's roadmap realistic?
On Samsung's most recent call, and on the road map it gave at its recent analyst meeting, the company claimed that it would deliver 20nm apps processors this year and its 14 nanometer FinFET process would be ready for the end of the year. 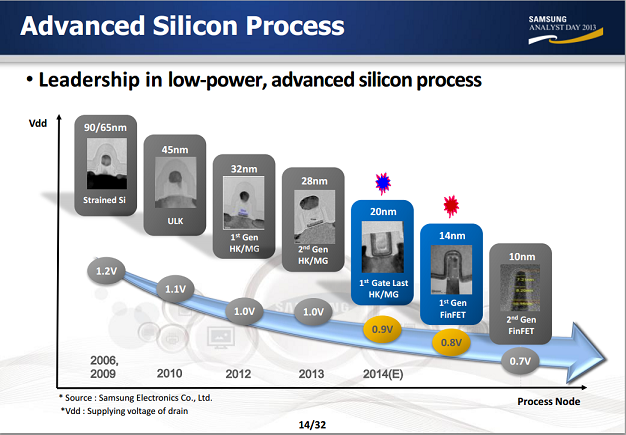 What's interesting is that the most recent Exynos products are still built on the company's 28-nanometer HKMG process. Further, there have been pretty loud whispers among the investment community that Samsung's yields on 20-nanometer are so horrendous that Samsung will be pulling out of the A8 supply chain completely, leaving that contract wide open for the more-established TSMC.

More interestingly, if Samsung's 20-nanometer yields are terrible, what are the odds that it will be able to waltz into 14-nanometer FinFET by the end of 2014? This doesn't really make much sense, although the company is likely to say whatever is necessary to keep investors from losing faith. While Samsung will likely eventually get to 14-nanometer FinFET, it will probably be a much more difficult road than the company has seemed to suggest on the various calls and in presentation materials.

Foolish bottom line
The takeaway here is that TSMC is, by and large, the leader in logic chip fabrication from both a revenue standpoint as well as a technology standpoint. TSMC has, regarding volume production, good yields on 20-nanometer. Of course, that excludes Intel as a foundry. More importantly, though, is whether Samsung really has the money to go head-to-head with TSMC as a leading-edge foundry. TSMC spends upward of $1.6 billion per year in R&D, and that amount is growing. It represents about half of Samsung's foundry revenue. Without significant growth, Samsung's non-memory semiconductor business simply can't afford to compete with TSMC and still remain profitable.

These Companies Are Leading the Charge in Satellite Internet