Tesla Motors, (NASDAQ:TSLA) is at it again, it's changing car ownership in a big way, but this time it has its sights set on China. The electric-car company announced a revolutionary pricing structure for Chinese customers, a market that is used to paying a premium for luxury items. In general, when shopping for cars the Chinese consumer expects to pay a premium of about 32% more than the average American. Tesla's Model S price point, matched with the growth of the Chinese auto market spells massive revenue potential for the electric-car maker.

Tesla goes its own way, of course
In late January, the Model S maker launched its online design studio in China and announced the first-of-its-kind price point of just under $120,000. Tesla is marketing this as a fair price, stating that "if we were to follow standard industry practice, we could get away with charging twice as much for the Model S in China as we do in the US." So why isn't Tesla charging more?

A respectful price
It's simple, really, Tesla is intent on treating their Chinese customers just as well as they treat customers from any other market. The company has decided to defy convention and price the Model S at the same price point as it does here in the U.S., "adding only unavoidable taxes, customs duties, and transportation costs." The company isn't "even factoring in the cost of the free-to-use Superchager network that Tesla will build across China." Tesla's competitors charge a lot more and make a much greater profit per car in China than they do in the U.S. or Europe. What a racket the traditional auto industry has drummed up in China, and here goes Tesla disrupting everything... again. 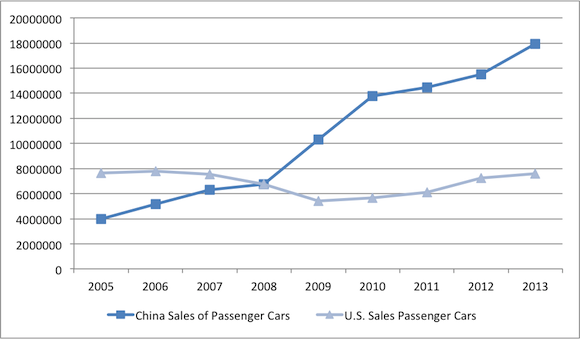 A huge opportunity
The Chinese auto market is booming. Sales of passenger cars grew just about 15% last year, and the China Association of Automobile Manufacturers expects the Chinese auto market to grow 8%-10% in 2014. Analysts predict that the luxury car market in China could grow to about 3 million units by 2020. All of which is great news for Tesla's investors.

By offering the Model S at such an approachable price point, Tesla opens itself up to a wider audience in China, giving it a leg up on its competitors. German brands like Audi and Mercedes Benz dominate 70% of the high-end auto market in China, which brings in about $40 billion annually. While Tesla is a small fish in a big pond, the company is actually set to gain from some competitors' electric-vehicle sales, as it supplies EV components for use in other brands. Tesla has positioned itself at the forefront of the growing Chinese auto market, and will profit from it.

Golden ticket
Tesla is ready to strike gold in China. Offering the growing market a high-end electric vehicle at a substantially lower price point than comparable cars, while supplying its competitors with EV components, spells a win-win for Tesla's shareholders.