Please ensure Javascript is enabled for purposes of website accessibility
Free Article Join Over 1 Million Premium Members And Get More In-Depth Stock Guidance and Research
By Patrick Morris - Mar 5, 2014 at 8:45AM

Bank of America had a remarkable year in 2013, and a recent study shows it was capped off by a strong fourth quarter especially compared with peers such as Wells Fargo and Citigroup.

With the dust settled on earnings season, three charts reveal why Bank of America ( BAC -2.27% ) may have capped off 2013 with the best improvement of the 25 largest banks.

SNL Financial recently reported its earnings scorecard, which examines the performance of the 25 largest banks in the United States. Looking at these charts, it's easy to see how Bank of America soared past peers such as Citigroup ( C -1.65% ), Wells Fargo ( WFC -2.37% ), and JPMorgan Chase ( JPM -1.81% ), and its regional banking competitors as well.

Many know that Bank of America has been on a staggering run since its stock price bottomed out at the end of 2011, but as the preceding table shows, it delivered a staggering 42.5% return to its shareholders from February 2013 to February 2014. Yet this wasn't the result of irrational market movements. Bank of America was only one of seven of the top 25 banks to see its earnings in the fourth quarter represent improvements over both the third quarter of 2013 and the fourth quarter of 2012. 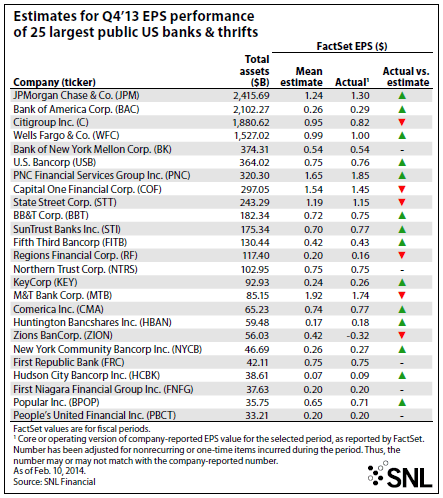 In addition to delivering strong earnings in the fourth quarter, Bank of America was one of 14 banks to surpass analysts' expectations. The same was true of its biggest competitors JPMorgan Chase and Wells Fargo, yet those two firms only beat estimates by 5% and 1%, respectively, whereas Bank of America came in almost 12% ahead of the group's consensus.

True success shouldn't be gauged based on how well one company does relative to analysts' expectations, and performance from one quarter to the next shouldn't dictate an investment decision, but that is one helpful reference point to take note of along the way. 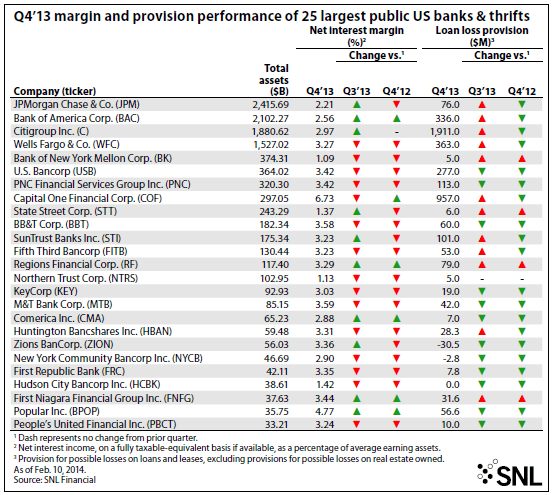 One of the critical measures of a bank's profitability is its net interest margin, or NIM, which measures the difference in what it pays out on deposits versus what it takes in on loans. Bank of America was one of only five banks to watch its NIM rise in the fourth quarter relative to both the third quarter and the fourth quarter of 2012.

Although its provision for credit losses was slightly higher in the fourth quarter relative to the third ($336 million versus $296 million), this was largely the result of benefits seen in its mysterious "other" category -- and excluding those things, it actually improved from $845 million to $524 million.

The bottom line
While trying to say which bank won or lost the fourth quarter is in many ways an arbitrary exercise, as investing allows for multiple winners (and losers), there's no denying that the fourth quarter at Bank of America truly represented its hard work in turning itself around, and it's truly starting to show in its results.