AbbVie's (ABBV) phase 3 trial data is compelling; however that doesn't guarantee it will win out over competitors Gilead (GILD) and Bristol-Myers (BMY)

AbbVie ( ABBV 2.71% ) has pulled the curtain further back on its phase 3 trial results for its hepatitis C cocktail. The results are impressive, but in an increasingly crowded space with promising advances coming out of Gilead ( GILD 1.10% ) and Bristol-Myers ( BMY 3.60% ), AbbVie may find it's the odd player out in the battle for market share. 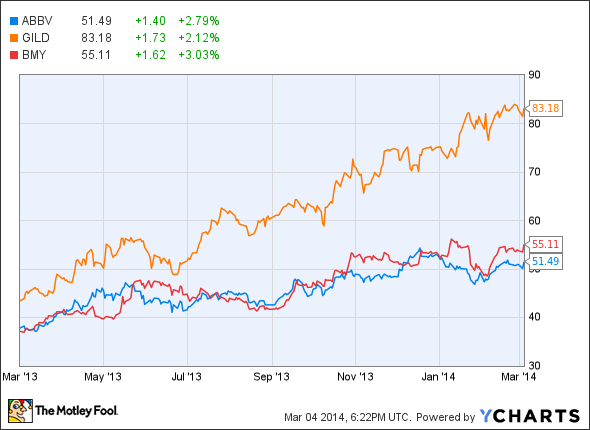 Curing hepatitis C
The data from AbbVie's trial shows that the company's three drug combination cured 99% of patients with genotype 1b hepatitis C. Genotype 1 is the most prevalent genotype here in the U.S., with the 1b variation representing a third of all genotype 1 infections. The genotype 1b variation is considered the easiest to treat, offering some of the highest cure rates. So investors will need to consider how the AbbVie cocktail measures up in other variations, like the more common 1a.

In AbbVie's Pearl IV phase 3 trials, for example, AbbVie's cocktail cleared hepatitis C in 90% of 1a patients when used without ribavirin. That rate jumped to 97% when ribavirin was included.

That throws some cold water on hope that AbbVie's cocktail will eliminate ribavirin's use altogether. However, it shouldn't be ignored that for many patients, particularly those with the 1b variation, the use of both ribavirin and interferon is likely over.

AbbVie expects to submit the cocktail for FDA approval in the second quarter; however, that means a decision isn't likely to come until after the FDA issues a verdict on a competing two-drug combination from Gilead.

Gilead has already won approval for one of the two drugs used in its combination, Sovaldi, and sales of Sovaldi have charged out of the gate. Despite receiving approval with just one month left in the quarter, Gilead notched nearly $140 million in Sovaldi sales during the fourth quarter as distributors built up stockpiles.

In trials, the one tablet combination of Sovaldi and Gilead's ledipasvir produced a 96% cure rate without the use of either ribavirin or interferon. If the FDA approves Gilead's combination, it appears it would offer patients a better dosing schedule, an absence of interferon and ribavirin, and similar results to AbbVie.

That's a potentially daunting challenger, but it's not the only hurdle facing AbbVie. During phase 2 trials, combining Sovaldi with Bristol-Myers' daclatasvir cleared the disease in 95% of patients. Importantly, the Sovaldi and daclatsvir combination cleared the disease in 98% of those with the tough-to-treat 1a variation, and 100% of 1b patients.

Gilead took a lot of heat for walking away from proceeding into phase 3 with Bristol on the therapy to focus on its own mash-up, but that won't stop doctors from prescribing the two drugs together -- assuming daclatasvir wins approval. European regulators have already approved compassionate use of the two drug combination in its markets, and Bristol is currently awaiting marketing authorization there and in Japan for daclatasvir.

Vying for blockbuster status
The race to provide next generation therapies is thanks to a large population eager for non-injection therapies -- regardless of price. More than 170 million are infected with hepatitis C worldwide, according to the World Health Organization. Roughly 3 million to 4 million of those patients are in the United States, and between 20,000 to 30,000 more people are diagnosed with the disease each year in the United States alone. As a result, drug wholesaler Express Scripts expects U.S. spending on hepatitis C will quadruple over the next few years.

A big reason for the surge in spending is the price tag being affixed to the newest approved therapies, Johnson & Johnson's Olysio, and Gilead's Sovaldi. Prior generation therapies Incivek and Victrelis came to market with seemingly eye-popping prices near $50,000, which was more than two times greater than prior treatment with ribavirin and interferon.

But Olysio and Sovaldi left those in the rearview mirror when they set the price for their newly approved compounds at $67,000 and $84,000, respectively. At those prices, it's little wonder some analysts peg peak annual sales for Sovaldi someday eclipsing $10 billion.

Fool-worthy final thoughts
AbbVie clearly has a successful therapy coming, but whether it wins market share is going to depend on some important considerations including how the company prices it, how quickly the FDA approves Gilead's single tablet combo, and whether doctors embrace off-label use of Sovaldi and Bristol's daclatasvir. Fools are going to have to look at patient populations by genotype too. Because if all things are equal in terms of pricing and efficacy, doctors might start parsing out therapies based on their success by genotype, rather than overall cure rates.