Samsung's (NASDAQOTH: SSNLF) very first Chromebook was an interesting beast. Unlike the power-guzzling, under-performing Atom based initial Google Chromebook, the Exynos Dual powered beauty offered solid performance and battery life in a power envelope that enabled a slim, fan-less design. The success of this particular Chromebook actually sent Intel ( INTC 3.10% ), and the rest of the PC industry, into somewhat of a panic, leading them to flood the market with fast and cheap – although not quite fanless – "Haswell" powered Chromebooks.

This new Chromebook is attractive...
Samsung's pair of new Chromebooks are actually quite attractive. The 13" model, which will retail for $399, comes packed with a 1920x1080 display, a Samsung-designed Exynos 5 Octa processor, 4GB of DDR3, and 16GB of onboard storage. It should be quite zippy, have solid battery life, and in general be a nice machine for users that don't need the full power and flexibility of a more expensive Windows device.

It's actually an interesting exercise to compare this device with a comparably priced Windows 8.1 notebook. In this case, a scan of Newegg.com reveals that a close competitor is this $366 notebook from Acer:

For roughly the same price, the user gets a Pentium M3520, a quad core Atom-class CPU with integrated Intel HD graphics (it should be a fair bit faster than the Exynos Octa), and a larger – but lower resolution (1366x768 against 1920x1080) – display. In place of the 16GB of integrated flash memory, Acer offers a 5400 RPM 500GB hard disk drive (more space, but much slower storage). Of course, the Acer runs Windows 8.1 while the Chromebook is limited to Chrome. A final thing to point out is that the Chromebook is fanless while the Acer apparently needs a fan.

...but the traditional PC vendors are pushing hard, too
While Samsung's new Chromebook has a more premium feel to it (the whole faux leather thing gives that impression) and while Samsung probably has a pretty nice cost structure, it's important to note that the traditional PC vendors appear to be willing to fight tooth-and-nail to try to claw share away from Samsung by aggressively pursuing Chromebooks. Indeed, Acer put out a new Chromebook, packing an Intel Haswell processor that offered greater performance than the Samsung Chromebook but retails for only $199. Unsurprisingly, this device rose to the top of Amazon's best-sellers list in seemingly no time flat: 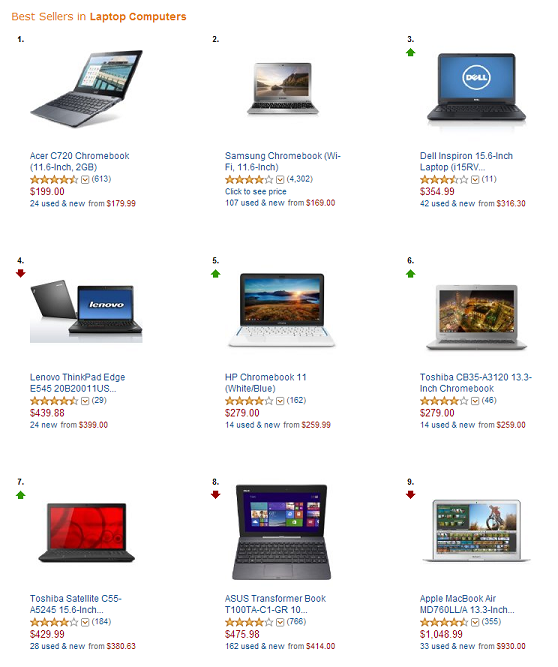 Does the new Chromebook change things?
The interesting thing here is the pricing of the new Chromebook. The best-selling notebooks seem to be, unsurprisingly, the cheapest ones (sans the MacBook Air). While the new Chromebook is obviously better/faster, there is probably some very real price elasticity in the low end notebook/Chromebook market. At $399+, many will probably go with a full Windows 8.1 device. The value in these Chromebooks seem to be as secondary/tertiary devices, which would explain the high sensitivity to price. Note that the Acer laptop, even with a fan, seems to sell better than the first-gen Samsung simply because it's a mere $44 cheaper.

Foolish bottom line
It looks as though Samsung has seriously de-focused on traditional notebooks and is trying to instead "build up" its Chromebook line (presumably because Samsung can keep more of the bill-of-materials to itself with a non-Wintel device). Whether this succeeds or not, time will only tell, but one thing is clear: The traditional PC ecosystem better put out a fanless, Intel-based Chromebook sooner rather than later. Say, when's Intel's Bay Trail going to find its way onto a Chrome device, anyway?