Please ensure Javascript is enabled for purposes of website accessibility
Log In Help Join The Motley Fool
Free Article Join Over 1 Million Premium Members And Get More In-Depth Stock Guidance and Research
By Leo Sun – Feb 2, 2020 at 11:30AM

Apple’s stock outperformed Samsung’s over the past year, but the South Korean tech giant’s growth engines are warming up again.

Apple (AAPL 0.66%) and Samsung (OTC: SSNLF) are fierce rivals in the smartphone market, but they operate very different business models.

Apple is a consumer electronics company that generates most of its revenue from iPhones, iPads, Macs, Apple Watches, and their related services. Samsung sells a wide range of mobile devices, consumer electronics, and appliances, along with memory chips, displays, and other components for other companies.

Apple's stock doubled over the past 12 months as iPhone sales stabilized and its subscription services, Apple Watches, and AirPods gained momentum. The "phase one" trade deal with China also allayed concerns about its supply chain and demand from Chinese consumers.

Samsung's Korean shares only rose about 25% during the same period, as cyclically low memory chip prices throttled the growth of its semiconductor business and offset the stronger sales of its mobile devices and consumer electronics.

But with memory prices approaching a cyclical trough, will Samsung's stock shine in 2020 and catch up to Apple's? Let's take a closer look at both tech giants to find out. 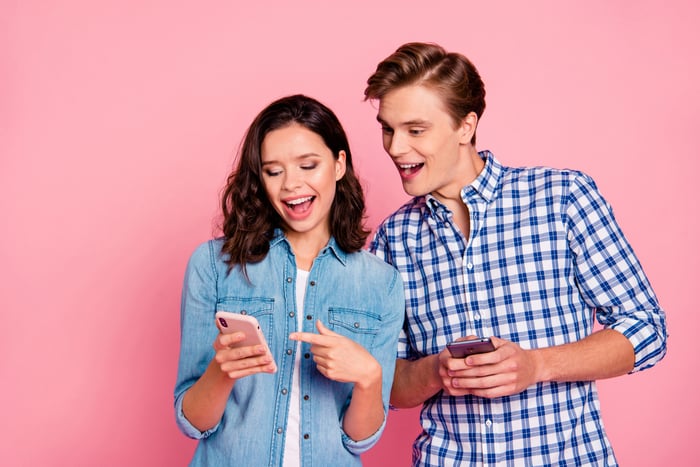 How do Apple and Samsung make money?

Apple generated 55% of its revenue from iPhones in fiscal 2019. About 18% came from its Services unit, which houses its App Store, Apple Music, Apple TV+, Apple Arcade, Apple Pay, and other services; 10% came from Macs; 9% came from wearables, home devices, and accessories; and 8% came from iPads.

Samsung generated 47% of its revenue from its IT & Mobile Communications (IM) segment, which sells its Galaxy mobile devices, in fiscal 2019. 41% came from its Device Solutions (DS) unit, which houses its semiconductor and display panel businesses, and 19% came from its Consumer Electronics (CE) unit, which sells TVs and various home appliances. That total exceeds 100% due to inter-company eliminations.

Apple and Samsung both posted rocky revenue growth over the past five years:

Apple's iPhone business mainly struggled with the saturation of the smartphone market, competition from Chinese rivals, and longer upgrade cycles. However, it expanded its ecosystem with new services and sold more Apple Watches and AirPods to soften that decline.

Apple recently stated that the new iPhone 11 was its best-selling model throughout the entire holiday quarter, which suggests that its revenue growth will accelerate throughout fiscal 2020. The arrival of 5G iPhones at the end of the year should also boost its sales in fiscal 2021.

Meanwhile, rising sales of AirPods and Apple Watches, along with the expansion of its subscription services ecosystem, should gradually diversify Apple's top line away from iPhones, iPads, and Macs. As a result, analysts expect Apple's revenue to rise 10% this year and 8% next year. 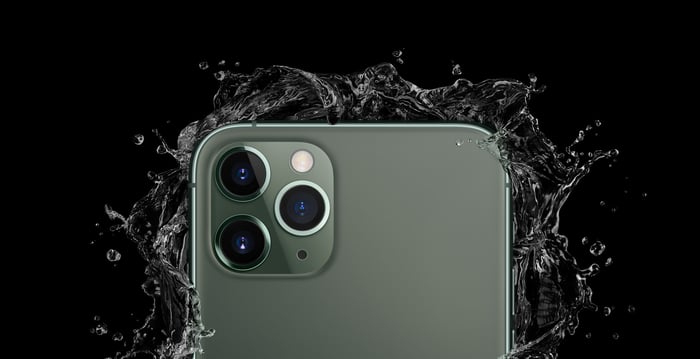 Samsung faced three core challenges in recent years: the saturation of the smartphone market, declining DRAM and NAND memory chip prices, and sluggish sales of TVs. Higher memory chip prices significantly boosted its sales in 2017, but a global glut of chips crushed market prices over the past two years.

Sales of Samsung's smartphones improved in 2019, but the segment's operating margins fell as it faced tougher competition in the low-end and mid-range markets. However, both revenue and operating profit at its consumer electronics business rose as it sold more premium OLED TVs and new appliances.

Analysts expect those tailwinds to accelerate and lift Samsung's revenue 9% this year and 10% next year.

Apple and Samsung are also expected to generate stronger earnings growth over the next two years.

Source: Yahoo Finance and Market Screener, as of Jan. 31.

Based on these estimates, Samsung's stock looks much cheaper relative to its earnings growth.

However, it's significantly more difficult to buy shares of Samsung than Apple. Samsung only officially trades on stock exchanges in South Korea, London, and Luxembourg. The unsponsored OTC stock in the U.S. (SSNLF) no longer tracks the underlying stock, and U.S. residents are prohibited from directly buying Samsung's GDR shares.

For most U.S. investors, Apple is the better buy

Samsung is poised for a strong recovery and its stock is fairly cheap. But unless you live overseas and have access to one of the three exchanges where Samsung is traded, Apple remains the better overall investment.

Apple's stock isn't particularly cheap relative to its growth, but the strength of its brand, its expanding portfolio of devices and subscription services, its strong cash flows, and its consistent buybacks and dividends still make it a solid long-term investment.