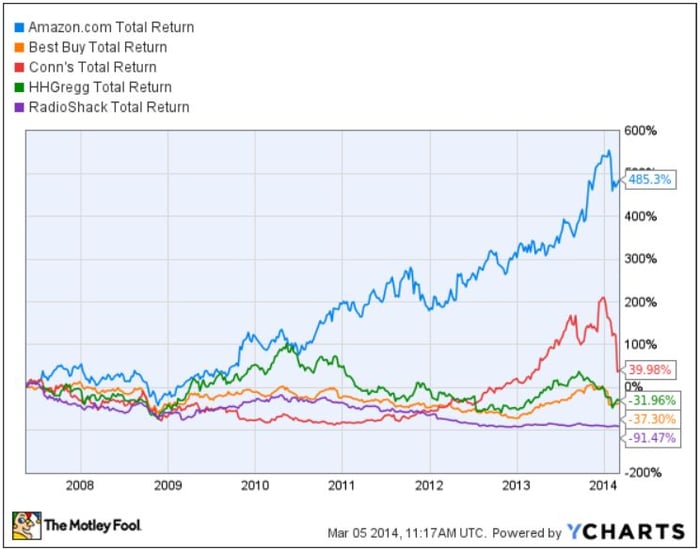 Amazon ( AMZN -1.38% ) and the online retail revolution are inflicting a lot of damage on retailers that specialize in electronics, like Best Buy ( BBY 1.88% ), Conn's ( CONN -2.07% ), hhgregg ( HGGGQ ), and RadioShack (NYSE: RSH). Many of these companies are selling for temptingly low prices. However, things could be getting worse before they turn for the better.

Fighting an uphill battle
Best Buy reported a 1.8% decline in domestic revenue to $12.3 billion during the quarter ended on Feb. 1. Domestic comparable-store sales fell by 1.2% and comparable-store sales in international markets declined 1.7% during the period. Profit margins are under pressure due to intense promotions, and gross margin fell to 20.2% of sales versus 22.3% in the same quarter of the previous year.

The main bright spot in the company's latest earnings report was the big increase of 25.8% in comparable online sales to $1.57 billion during the quarter. It's good to see Best Buy growing its online presence, but online is not compensating for the decline in physical stores' sales. Besides, if online is the name of the game, then Best Buy will be fighting an uphill battle against Amazon.

Conn's is doing much better on the retail side, but that's mostly because it finances the majority of its sales to customers with below-average credit scores, so Conn's is a subprime lender as much as a retailer. In fact, that strategy seems to be backfiring lately, as management has recently warned that earnings will come in materially below its previous guidance due to higher-than-expected delinquency rates and charge-offs in its loan portfolio.

Things are looking even worse for hhgregg, which reported a worrisome decline of 11.6% in sales to $707.1 million during the fourth quarter of 2013. Comparable-store sales declined 11.2% during the period, and profit margins are also moving in the wrong direction.

While sales of appliances and home products increased during the quarter at hgregg, segments like consumer electronics and computing and wireless showed big declines of 19.7% and 24.5%, respectively, in comparable-store sales.

RadioShack is no exception to the rule by any means. Total sales fell by a whopping 20% during the fourth quarter of 2013 on the back of a 19% dip in comparable-store sales. The company also reported an operating loss of $166 million versus an operating gain of $16 million in the fourth quarter of 2012, so things continue to worsen for RadioShack on the profitability front.

Online retail: It's just the beginning
The online retail revolution may be a cliche at this stage, but that doesn't make it any less significant as a factor to consider when making investment decisions. Especially in electronics, a sector that is particularly prone to showrooming and where pricing is a big competitive factor for retailers, Amazon has a big advantage over traditional brick-and-mortar stores.

Amazon's scale, efficient operations, and willingness to price products at minuscule profit margins make the online retailer a dreaded competitor in the category, and the company is clearly gaining market share versus brick-and-mortar stores at a remarkable rate.

Amazon reported a huge increase of 25% to $10.65 billion in sales of electronics and other general merchandise in the U.S. market during the fourth quarter of 2013. It also announced that more than 36.8 million items were purchased worldwide during Cyber Monday, a truly mind-blowing figure of 426 items per second.

According to a recent report from Kantar as quoted in The Wall Street Journal, online sales still account for only 25% of sales in the computers, electronics, and appliances category, so online retail can still gain a lot of terrain versus physical stores.

Bottom line
Judging by recent financial performance from different companies in the sector, and considering that online sales still have a lot of room for growth, it seems like brick-and-mortar electronics retailers will remain under heavy competitive pressure in the coming years. Just because stock prices in the sector are looking cheap does not mean they won't become even cheaper in the future.