There was no shortage of reasons for investors to worry before Home Depot (NYSE:HD) and Lowe's (NYSE:LOW) gave results recently. The slowdown in the housing market in the second half of 2013 had the market concerned going into the earnings reports. Moreover, some recent lackluster earnings reports from retailers encouraged some investors to conclude that Home Depot and Lowe's would disappoint. In the end, they both delivered sold results. But the question is: What are their prospects going forward?

As ever with retailers, the key is to follow movements in their comparable-store sales. The latest data confirms that Home Depot is outperforming Lowe's, and it also suggests that growth is slowing for the home-improvement retailer. 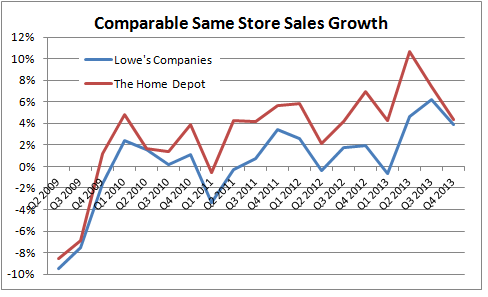 Moreover, the rise in mortgage rates does seem to have slowed the housing market, and it's not hard to see why investors may have been pessimistic going into the results. For example, the following chart reveals the decline in existing home sales in the second half of 2013. 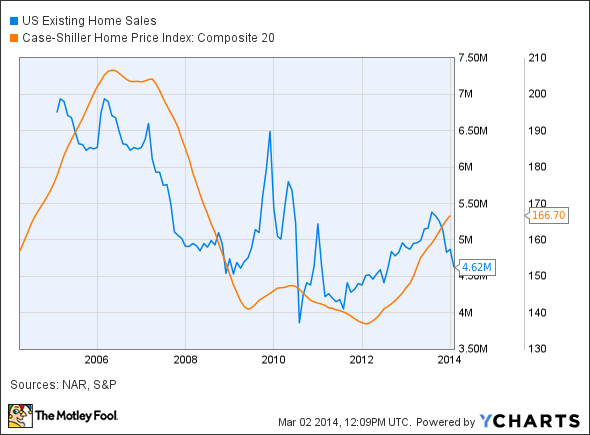 Is now the time to give up on the housing sector?

Four reasons to stay optimistic
First, if you look at the chart above, it's noticeable that pricing remains in an uptrend. Common sense suggests that home-improvement spending should be correlated with housing turnover. However, on Home Depot's recent conference call, CFO Carol Tome argued that the relationship wasn't as strong in recent years as it had been in the past. All told, as long as pricing continues to be strong, then homeowners are likely to feel incentivized to make home improvements.

The second reason is related to the first in the sense that the current housing inventory situation suggests that house prices will remain strong. For example, one of the most widely followed data points is months' supply of existing homes from the National Association of Realtors. A figure below five is seen as indicating an undersupply of housing. Consequently, the current market is seen as being tight and supportive of higher prices. 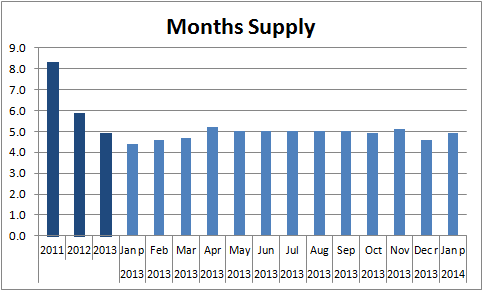 Third, lending standards appear to be loosening. Foolish investors already know why Wells Fargo (NYSE:WFC) is so important to the U.S. housing market. Indeed, Home Depot's management recently discussed the positive effects on the housing market from Wells Fargo lowering its credit requirements for Federal Housing Administration loans. This is good news for housing -- and also for Wells Fargo's prospects -- because it implies that the bank is in a position to extend its loan book.

Fourth, Foolish investors always need to remember that strength in the housing market is an integral part of U.S. household net worth, and the Federal Reserve (rightly or wrongly) is committed to ensuring that the recovery remains on track.

In other words, if rising interest rates threaten to choke off a recovery, the Federal Reserve will take action to help sustain liquidity in the economy. This has been the preferred mode of action in the recovery, and nothing suggests that it won't be the same going forward.

Home Depot or Lowe's?
Of course, there is nothing stopping investors from buying both stocks! Indeed, analysts have some impressive growth prospects penciled in for both companies in the coming years. 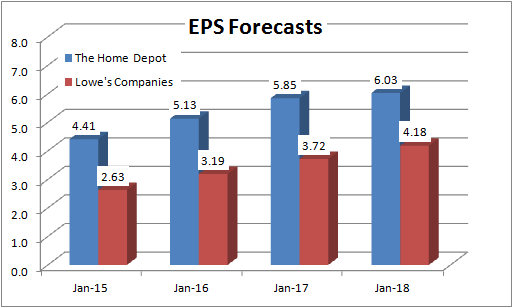 While Lowe's is forecast to grow faster in the next few years, Home Depot may well be the better choice. Not only has Home Depot managed to grow comparable-store sales more than Lowe's in recent years, but its free-cash-flow-based valuation is more attractive than Lowe's. For example, interpolating from Home Depot's guidance for 2014 gives free cash flow generation of around $7.3 billion versus Lowe's guidance of $2.9 billion for the full year. These figures put them on a forward free cash flow-to-enterprise value yield of 5.8% and 4.7%, respectively.

Moreover, Lowe's has now finished its first round of "value improvement line reviews." This was an initiative to normalize inventory levels across all of its product lines. The plan contributed to Lowe's growth in 2013 and will do so again in 2014, but after that Lowe's might find it harder to generate growth. Home Depot may prove to be a better option for pure housing exposure, but both stocks will do well if the housing market remains strong.