Weak hiring has been blamed on bad weather for several months running, but the leading private-sector survey might have just made itself less relevant with revisions.

One of the worst pieces of economic news we can get every month is one that indicates a weak American employment environment. However, when that news comes from business outsourcing giant ADP ( ADP 2.73% ), the market often takes it with a grain of salt.

Last month, the Dow Jones Industrial Average ( ^DJI 0.00% ) met ADP's monthly update with indifference, as it closed out the day barely changed from the previous day's close. This month, the same situation appears to be playing out, as ADP's estimate of 139,000 new jobs for February fell well below the 155,000 new jobs forecast by leading economists. ADP also undertook sweeping revisions to its earlier estimates, which cut January's figure from 175,000 new jobs created to a mere 127,000 new jobs, and also reduced December's estimate by 44,000 jobs, and November's estimate by 10,000 jobs. However, the aggregate result of these changes was positive over the long run, which may be why the Dow remains only 0.2% below yesterday's close in the early afternoon.

ADP's data begins in April of 2001. The sum total of its revisions had the effect of adding 551,000 jobs to the tally since that date, with much of those (343,000) added in the past three years. The discrepancy between ADP's pre- and post-revision tallies of all private-sector jobs is even wider, as 843,000 new jobs are now included in the calculation as compared to January's figure. Let's take a look at the way these revisions alter the employment picture painted by ADP's data: 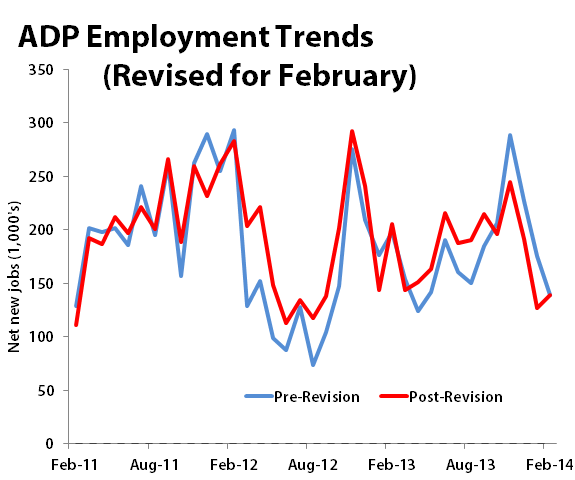 As we've already explored, the past three years enjoyed a general trend of upwards revision, which added 343,000 jobs to the national total since February of 2011. However, the recent winter woes have revised ADP's numbers down for several straight months -- Moody's chief economist Mark Zandi, who collaborates with ADP on the monthly employment report, noted that "bad winter weather, especially in mid-month, weighed on payrolls. Job growth is expected to improve with warmer temperatures."

Since ADP's jobs report is often used as a rough proxy for the Bureau of Labor Statistics' monthly employment update, it's also worth examining whether these revisions actually brought the two reports closer together: 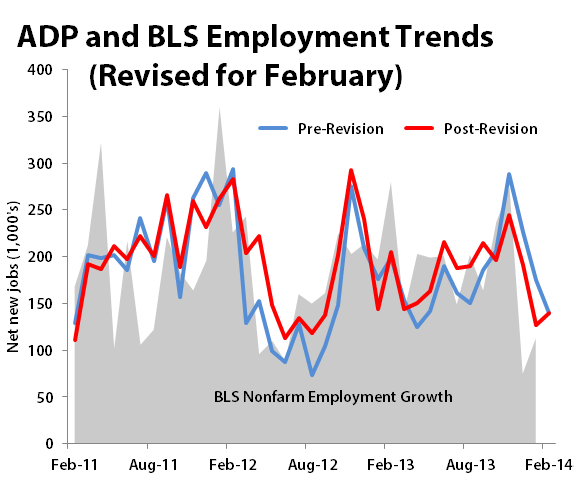 The strange thing is that it appears that the revised numbers are actually a little further away from the BLS data than ADP's earlier numbers. A quick summary of the difference bears this assessment out: ADP's revised numbers now add up to 315,000 fewer new jobs over the last three years than are recorded in the BLS data, while earlier ADP data was only off by a total of 27,000 additional jobs over three years. It's the difference between less than 1,000 new jobs a month, and nearly 9,000 fewer jobs a month since February of 2011.

However, the difference becomes slightly less notable (though it's still rather striking) when we stretch our assessment out over the entire time frame of ADP's data. From April of 2001 to the present, ADP's revised figures account for 850,000 more jobs added to American employment rolls than the BLS figures, which are more reasonable than the 1.4 million job difference between the earlier data and the BLS figures.

Here's a comparison of last month's three-year trend of employment growth and this month's revised figure: 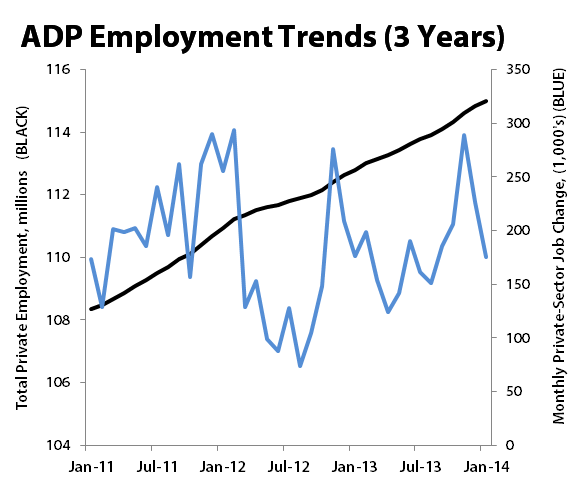 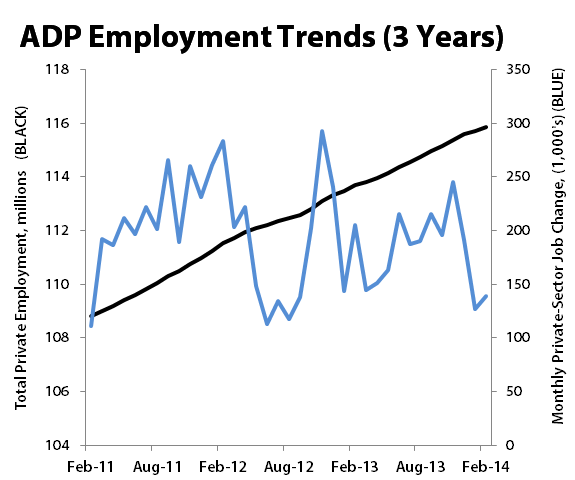 The revisions are subtle, but important: before revising its data, ADP recorded a peak of 115.657 million private payroll jobs in December of 2007. The revision moves that peak up to 115.972 million jobs, reached in January of 2008. Today's total of 115.843 million jobs would have set a new peak before the revision, but as it stands now, America's economy still needs to add 129,000 new jobs to surpass its pre-crisis employment highs.

That should be attainable this month, as a rebound from poor weather should tack on more than enough new jobs -- barring a larger economic slowdown that most economists have thus far overlooked. Even a return to average would be more than enough, because the past six months have averaged 186,000 new jobs a month, and the last three months have tacked on an average of 153,000 new jobs each. The question analysts and investors should ask now is whether or not ADP is accurate enough as a proxy for official data to continue following closely, as the discrepancy between its results and the BLS' data appears to be widening, even after revisions are taken into account. We'll see if the gap narrows soon enough, as the BLS will release its own jobs data in two days' time.