Apple and Coca-Cola are two very different companies, but they both look like undervalued opportunities in high-quality names.

Apple ( AAPL 3.55% ) and Coca-Cola ( KO 0.55% ) are two very different companies operating in their own independent industries. However, the two companies have some important similarities when seen from an investment perspective: They both offer superior quality for a bargain valuation.

Effervescent dividend payments from Coca-Cola
Coca-Cola is facing some difficulties lately: Many consumers in developed countries are moving away from soda toward healthier alternatives, and sales in emerging markets -- where volume is still growing -- are being hurt by unfavorable currency fluctuations.

There is not much the company can do about currency volatility, but those factors are transitory by nature. When it comes to changing consumer habits, Coca-Cola is increasing its focus on products like tea, juice, water, and sport drinks in order to adapt to customer's demand for drinks with lower calories and less artificial ingredients.

Unparalleled brand presence, economies of scale, and a gigantic global distribution network protect the company from the competition. Coca-Cola has been able to generate growing capital distributions for investors through good and bad times, and there is no reason to believe that's going to change anytime soon.

The company has raised its dividend during the last 52 consecutive years, including a 9% increase announced on Feb. 20. The current dividend yield around 3.2% is looking quite attractive from an historical perspective; during the last 20 years, Coca-Cola has only traded at a cheaper valuation during the financial crisis. 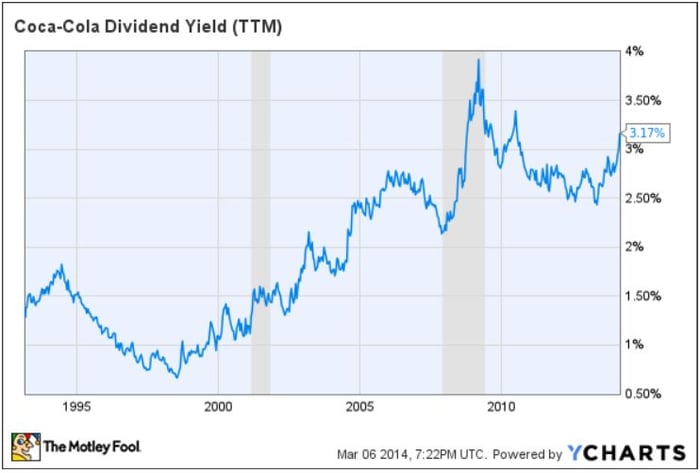 Considering the company´s underlying fundamental strengths and attractive dividend yield, Coca-Cola could be a convenient purchase for opportunistic dividend-growth investors.

Apple invests in itself
Apple is also facing slowing growth during the last several quarters. The smartphone and tablets markets are maturing, and lower-cost competitors are gaining market share, especially in emerging markets, where consumers tend to be more price sensitive and the carrier subsidy model is not as popular as in the U.S.

However, Apple is still the most distinguished brand in the high end of the pricing spectrum, and the company sold a record amount of both iPhones and iPads in the last quarter of 2013. Sales of iPhones reached 51 million units, and iPad unit sales came in at a better-than-expected 26 million units in the quarter.

The company looks compellingly cheap at these levels. Apple is trading at a P/E ratio near 13 times earnings, a big discount to the average valuation of around 18 for companies in the S&P 500 index. In addition, the company owns nearly $159 billion in cash and equivalents on its balance sheet; this is more than 33% of Apple´s current market cap.

The company is capitalizing on the opportunity to repurchase stock at convenient prices. CEO Tim Cook told the Wall Street Journal in February that Apple had repurchased nearly $40 billion in stock during the previous year, and $14 billion of that money was spent in only two weeks after investors reacted with unwarranted negativity to the company's latest earnings report.

An attractive valuation and aggressive capital distributions should provide some downside protection. However, the company needs to prove that it can continue innovating after Steve Jobs for the stock to move substantially higher.

Importantly, Tim Cook has stated on several occasions that the company will be entering new market categories in 2014, so this could be a make-or-break year for the company.

If Apple proves to customers and investors that it can still create innovative and disruptive products, then the stock has abundant upside potential from current levels. On the other hand, the market is becoming impatient with the company, so Cook and his management team really need to deliver the right products in the promised time frame. In any case, Apple still has more upside potential than downside risk at current prices.

Bottom line
Apple and Coca-Cola are facing slowing growth rates lately, but the two companies have the fundamental strengths to leave their problems behind. Uncertainty usually creates opportunity for long-term investors, especially when a high-quality company sells for a discounted valuation. This seems to be the case for both Apple and Coca-Cola, two very different companies with many things in common.