AMC Networks' (NASDAQ:AMCX) The Walking Dead continues to be the top show on cable, and much like its zombies, the franchise...just...doesn't...stop. There are video games, comic books, novels, action figures, a talk show, and even a companion spinoff in the works. Will it succeed where others have failed?

What's the franchise worth?
In late 2011, 24/7 Wall Street and NBC News estimated the size of the "zombie economy" to be nearly $6 billion. Blockbuster movies like 28 Days Later and Zombieland accounted for about half of this figure, while the remaining dollars were split mostly between games, comics, and television. Assuming reasonable growth over the past two years, aided by World War Z, and Dead's rising popularity -- season four viewership is double that of season two -- $7 billion isn't out of the question.

But what's The Walking Dead franchise worth? As fellow Fool Tim Beyers writes, international distribution and "the richest content wellspring in all of entertainment" indicate it could be ten figures. A billion-dollar valuation would rival what some think James Bond and Iron Man are worth, and while that seems a bit high, AMC's Dead still has a long way to go.
The current series has covered about 40% of Robert Kirkman's ongoing comic book storyline, meaning there's potential for at least six more seasons. Given that Kirkman himself has already revealed plans for Issue number 200 (78 issues from now), the television show could last well beyond 10 seasons. Perhaps there is some truth to jokes made by AMC CEO Josh Sapan last year, who remarked that the show could still be on the air in 2022.
Will a spinoff work?
But that's not even the most intriguing aspect of The Walking Dead. AMC has also announced a companion series, or spinoff if you will, that Kirkman says, "will be another group of characters, surviving in another part of the world," according to ComicBook. He adds, "The [primary] show will continue uninterrupted, as if the other [spinoff] show doesn't exist." A target date of 2015 is about all else that's known at the moment.
Over the past four decades, there have been plenty of spinoffs. Successes like Private Practice (based on Grey's Anatomy) and Frasier (preceded by Cheers) have been released alongside epic failures. Some of the worst include Joey, a spinoff of Friends, and Joanie Loves Chachi. In recent years, though, the good mostly outweigh the bad. 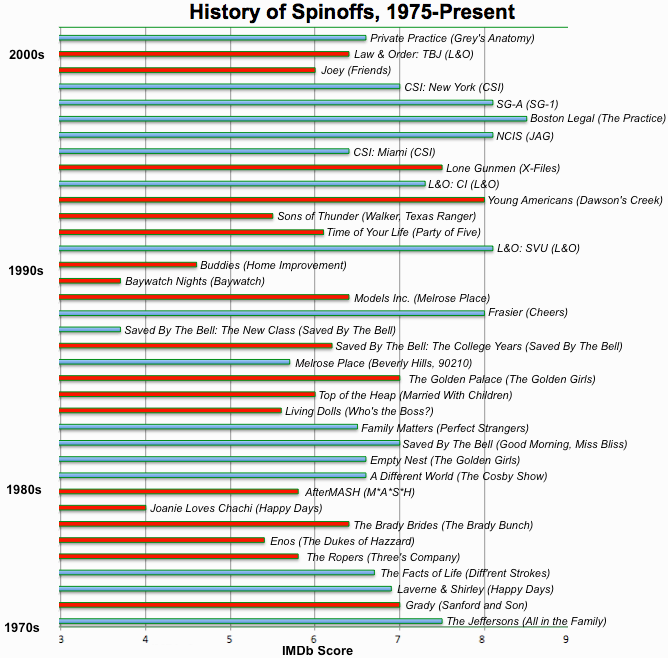 Sources: Television Obscurities, Business Insider, IMDb. Because majority of historical ratings data is unavailable, shows are designated as Hits (Green) or Flops (Red). A show flops because it either: (a) generates significantly less viewership than the original, (b) is canceled after its first season, or most likely, (c) both.

One point is abundantly clear when looking at the data: The majority of past spinoffs were comedies, and of those remaining, almost all were legal and romantic dramas. The Walking Dead will be the first survival horror to join this club.

In addition to novelty, AMC's companion series is in a good position to succeed because it will debut while its primary show is still on the air. In recent history, the majority of spinoffs in this position were hits -- Private Practice, CSI: New York, CSI: Miami, Stargate Atlantis, and NCIS -- and it makes sense. Viewers are more likely to support a spinoff if they're still watching the original. Many of TV's biggest flops, like Joey and The Golden Palace, failed in part because they didn't follow this strategy.

The bottom line
It's easy to understand why fans are excited about The Walking Dead's spinoff, and considering recent history, AMC should be psyched too. No matter what time slot the series is given, it will be the second most popular show on cable TV if it can just draw half of Dead's current audience.

The zombie-filled world Robert Kirkman created will only get bigger with time, and that's good news for everyone, except maybe its original characters. I don't know if Daryl, Michonne, and the rest of Rick's crew can survive beyond 10 seasons.

Will ‘The Walking Dead’ Spinoff Succeed Where Others Failed? @themotleyfool #stocks $AMCX Next Article
Current