Please ensure Javascript is enabled for purposes of website accessibility
Free Article Join Over 1 Million Premium Members And Get More In-Depth Stock Guidance and Research
By Patrick Morris - Mar 7, 2014 at 7:00AM

While Regions Financial trailed peers SunTrust and BB&T in 2013, its chief financial officer recently revealed why investors should be optimistics.

Regions Financial ( RF -3.23% ) had a solid, but unspectacular, year in 2013. Yet one recent revelation from one of its executives reveals the best may indeed be ahead of it.

Underwhelming performance
Total net income at Regions rose by just $2 million, which on a base on $1,120 million isn't much to raise an eyebrow. It did manage to reduce its share count, which resulted in earnings per share from continuing operations to also rise -- but again, ever so slightly -- from $0.76 to $0.78.

It would be easy to think this would mean Regions Financial should be crossed off from an investment consideration when looking at it against other regional banks like SunTrust and BB&T, but quotes from the company's management team reveal the seemingly underwhelming performance may actually be a great thing.

Investing for the long-haul
One of the troubling things at Regions was the reality that while almost all of its peers were cutting costs and reducing expenses, those at Regions actually rose -- albeit slightly, by $30 million, or 1% -- which was truly out of the ordinary. In its own presentation it revealed its efficiency ratio -- a key measure of banking profitability that evaluates the cost of each dollar of revenue -- moved in the wrong direction.

As shown in the chart below, it went from being well ahead of its peers to trailing them by the end of the year: 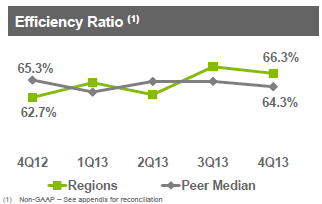 Yet the chief financial officer at Regions, David Turner, noted "expense management is just incredibly important when you have challenges on the revenue side," yet the reason for the pickup in expenses was the reality the bank "made investments in technology and talent."

He also highlighted more than 64% of its new hires -- personnel are often some of the biggest reasons for cost increases at banks -- are those who can generate increased revenue.

The reason for optimism
Turner went on to say with banking; "it's a relationship model. It's really about serving the customers...understanding their needs, and making sure we develop the products to deliver those needs."

It is critical to see the transformation of banks occurring over recent years, and some of the only ways they can increase revenues is by providing better technology and relationships than peers. It is an incredibly competitive environment where truly the differentiating factors are the products, relationships, and technology provided to customers.

At times it is easy to want banks, and really any company, to always cut expenses in the name of increased profitability. And while such actions may lead to short term gains, they can be ultimately detrimental in the long run if they result in fewer opportunities to add to the top line results.

In the case of Regions, investing in its businesses in an effort to improve its competitiveness and yield greater revenue in coming years is an admirable initiative, one investors should continue to monitor throughout 2014. If it ultimately doesn't lead to more revenue, then it is reason for concern. However, if it results in higher revenue and bottom line profitability, then investors will have reasons to be optimistic.

Turner concluded by noting; "2013 was the foundational year. We'll build on that for 2014." As a result, investors should see how Regions progresses on its efforts throughout the coming quarters, as it could mean big things for the bank down the line.