Arrowhead is leveraging RNAi technology acquired from Roche in 2011 to develop a new therapy for hepatitis B.

The company won approval from Hong Kong regulators to start a phase 2a trial for its ARC-520 drug for hepatitis B. ARC-520 will be dosed alongside Bristol-Myers' Hepatitis B drug Baraclude, a therapy that generates more than a billion in annual sales for Bristol. 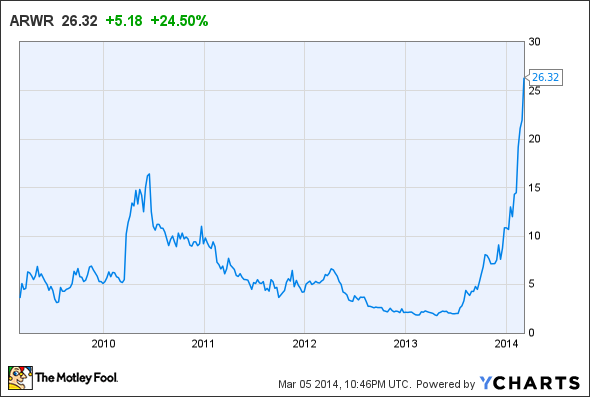 Coming of age
The study will help Arrowhead determine efficacy and dosing, important considerations for moving the drug into much larger trials. The launch of the phase 2 trial comes following phase 1 results showing ARC-520 was generally safe and well-tolerated in six different doses.

While investors may not be familiar with Arrowhead, the company isn't a new player in RNAi. In fact, it acquired its dynamic polyconjugates technology from Roche when it bought Roche's RNAi assets in a 2011 fire sale.

Roche had previously invested big money into RNAi research in hopes such targeted therapies would usher in a new generation of disease busting drugs.

Now, Roche likely wishes it had held on given excitement surrounding RNAi is returning thanks to therapies from Isis, Alnylam, and now Arrowhead, advancing through clinic.

Isis, through its partners, has 20 compounds in phase 2 or phase 3, and Alnylam's most advanced compound, patisiran for TTR-Mediated Amyloidosis, is in phase 3.  Additionally, Isis already has one FDA approved drug, Kynamro, being sold by Sanofi's Genzyme unit.

Big opportunity
Thanks to vaccinations, the number of people with acute hepatitis B has fallen 82% in the U.S. since 1990. Despite the drop-off, the number of chronic cases requiring treatment remains high. An estimated 800,000 to 1.4 million people are diagnosed in the U.S., and 240 million are diagnosed worldwide. That sheer size translates into more than 600,000 deaths annually from the disease.

Hepatitis B is most common where vaccines have been slow to penetrate; including sub saharan Africa and East Asia, where between 5% and 10% of the population is infected.

As a result, international sales of hepatitis B treatments are higher overseas than in America and Western Europe. Currently, the bulk of that treatment comes in the form of side effect laden interferon, antivirals and Bristol's Baraclude. Baraclude's success hints at the potential for ARC-520. Sales of Baraclude totaled more than $400 million in the fourth quarter, and global sales of $1.5 billion were 10% higher last year than in 2012.

Unfortunately, all three of these current treatments aim at slowing disease progression, rather than curing it. That means those diagnosed with chronic hepatitis B remain at risk for liver cancer and liver failure, both of which offer a poor prognosis.

However, ARC-520 could still be years away from being commercialized, so investors should approach Arrowhead with caution. Fools will want to stay tuned in to see early results from this phase 2 trial, which should come in the third quarter.