PD-1 and PD-L1 (the ligand for the PD-1 receptor) agents work on proteins involved in programmed cell death of tumor cells. Journal of Clinical Oncology published March 3 research on nivolumab showing one and two year survival rates of 62% and 43%, 31% of patients showing objective tumor regression and a two year median response duration. This study examined advanced, treatment-refractory melanoma patients, making the response all the more impressive .

The PD-1 race is a hot one, which Merck will likely lead, planning for submission to the FDA this summer. Merck had made MK-3475 a cornerstone of its expansion into cancer immunotherapy, hoping that the program will yield a success to end its drought of new drug approvals. Besides multiple early stage studies of MK-3475 in various tumor types in-house, it recently went on a slew of partnerships to study combination therapies for different cancers. Of these, Merck partnered with Incyte (NASDAQ:INCY) to examine a combination of MK-3475 with Incyte's INCB24360 in non-small cell lung cancers, and with Amgen (NASDAQ:AMGN) to look at MK-3475 with talimogene laherparepvec.

Bristol-Myers is not by any means an underdog in this race, but the company's decision in late January to continue Phase II studies of its nivolumab and Yervoy combination rather than going to Phase III studies caused much criticism from investors yearning to make Bristol-Myers the first to a PD-1 therapeutic. The rationale behind Bristol-Myers' conservative approach was not clear as data from the study will not be released until this summer at the ASCO conference, but investors clearly took it for the worst as shares dropped nearly 6%, the biggest single-day drop since August of 2012. 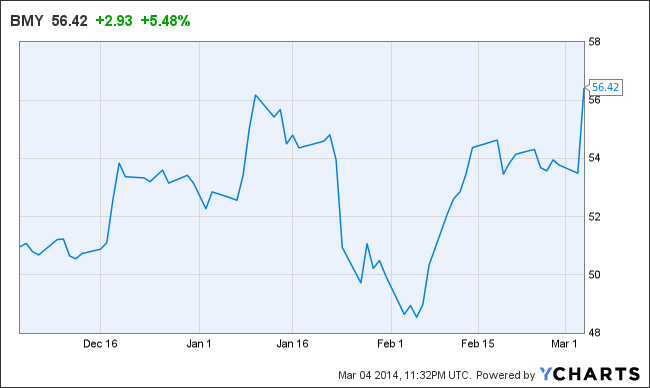 Interestingly, it was this Yervoy-nivolumab combination that really first set off the field when it showed a 40% response rate in melanoma last summer at ASCO. At the time, Merck was still fumbling to show much positive data and it was Bristol-Myers and Roche's MPDL3280A for non-small cell lung cancer that were seen as the frontrunners.

Since last fall, however, Roche has not released much in the way of new data for its agent. MPDL3280A is the only agent among the three leaders that operates on PD-L1 rather than PD-1, the latter being the receptor for which the former acts on.

Roche has, however, suffered a couple setbacks this year that may hurt investor confidence on its R&D success. The same day as Bristol-Myers' announcement of nivolumab's success in melanoma, Roche had a separate lung cancer therapy, MetMab combined with Tarceva, fail to block tumor growth in late-stage trials.

Nonetheless, Roche is looking pretty strong as the $16.3 billion in operating cash flow last year pays down its 2009 Genentech purchase and opens up the possibility for more dealmaking and R&D.

Bottom Line
Looking at just the PD-1 race, Merck looks like it is certainly trying the hardest, with the aggressive pace at which it is rolling on MK-3475 projects. However, Merck suffers from a lack of empiricism when it comes to R&D, and the quick pace may be a result of desperation more than it is actual confidence -- this project is very important to the company.

Roche is historically strong in oncology, but had a couple recent setbacks in R&D and still needs to focus on building its cash reserves following the $47 billion Genentech acquisition. In the meantime, it has remained largely quiet about MPDL3280A as of late as compared to rivals Merck and Bristol-Myers, perhaps accepting its place lagging the two for a PD-1 therapy.

On the other hand, Bristol-Myers' great earnings reports, successful cost-cutting measures, new product launches (i.e. Eliquis) and strong sales (I.e. of Yervoy and Sprycel) put it in a very strong position as a company. When it comes to its PD-1 program, it does not need to make it a cornerstone project like Merck does, and it can afford to be more conservative in development.

However, the PD-1 race is a very competitive one and perhaps the recent study in advanced melanoma will spur Bristol-Myers to speed ahead on nivolumab. Bristol-Myers appears to have a very viable product on its hands and when it comes to R&D, empiricism and reputation is on its side.