It's tough to buy any story without some sort of concrete evidence -- particularly one that investors have already been burned for believing for years. In this case, investors looking at investing in chip giant Intel (NASDAQ:INTC) are waiting to see the company finally win some designs.

The bad news is that these designs didn't materialize at Mobile World Congress. The good news is that Intel is getting much, much closer to becoming a truly powerful player in smartphones.

It's not the processor's fault
Despite Intel's rich heritage in the computing market, it has seen extreme difficulty in penetrating the smartphone market. Some erroneously assume that there is some magic to the ARM (NASDAQ:ARMH) architecture that makes it more suitable than x86. The truth is that the instruction set architecture -- at least for smartphone/tablet-class processors and above -- isn't a hindrance to a power-efficient, world-class design. Intel's Silvermont processor core, for example, offers similar performance to the best ARM cores but actually does so at Iower power, thanks in no small part to Intel's manufacturing lead.

Some might make the argument that x86 necessitates an area penalty over ARM. This is true in extremely simple micro-controller designs. But once again, at the size/performance that we're talking about, the penalty is negligible. And again, since Intel has a manufacturing lead, it actually has a density advantage. All in all, the low-power CPU part of the equation has not been the problem many believed it to be. It's the rest of the system-on-chip that has traditionally been the issue.

Illustrating the point
Here is a rough representation of the highly successful Qualcomm (NASDAQ:QCOM) Snapdragon 801 system-on-chip that will power just about all of the next-generation "hero" devices:

If you'll notice, the SoC comes packed not only with strong CPU and GPU blocks, but the SoC comes with 21-megapixel camera support, integrated Bluetooth/Wi-Fi/GPS/4G LTE, a sensor core likely similar to Intel's sensor hub, and encode/decode hardware support for the latest video standards. In contrast, take a look at Intel's latest, greatest Moorefield system-on-chip targeted at phones: 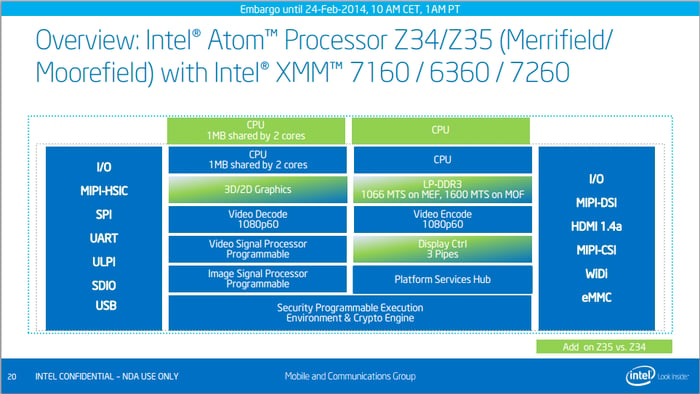 Intel's chip doesn't have a built-in 4G LTE modem, no Wi-Fi/Bluetooth/GPS, and no H.265 decode/encode support. The camera support tops out at 13 megapixels. While Intel's CPU and GPU implementations are right up there with those in the Qualcomm chip -- and probably lower-power, to boot -- the rest of the chip just doesn't have the right stuff for an ultra-high-end phone.

That said, it's all coming together
It's important to see that it's all coming into place. Intel's XMM 7260 LTE-Advanced modem, while not integrated onto the main SoC, looks world-class. Intel has the low-power CPU IP, it can license/develop good low-power GPU IP, and the rest of the SoC blocks continue to get better over time. While Intel isn't a world-class smartphone chip vendor today, all signs point to the company delivering on its promise that its next-generation part, called Broxton, will be leadership. If the company can actually deliver with this, then the sky's the limit -- but that's the trick, isn't it?