The Boston Beer Company (NYSE:SAM) recently reported mixed results for the fourth quarter of 2013. The company posted strong depletion and shipment growth of 20% and 29%, respectively, but it fell short of earnings estimates with earnings per share of $1.33. While this might worry investors who are focused on the short term, the company has its sights set on long-term growth while it faces competition from rival brewers like Craft Brew Alliance (NASDAQ:BREW) and Anheuser-Busch (NYSE:BUD).

Investing for the future
Boston Beer's depletion growth was driven by the Samuel Adams Twisted Tea and Angry Orchard brands. These brands were helped by an increase in advertising, promotion, and selling expenses as the costs that the company incurred for these items rose by $38.6 million from 2012. The spending increase focused on local marketing, sales commissions, point of sale and media advertising, and increased freight to distributors.

The company expects to maintain a high level of brand and capital investment as it works to expand growth in new beers and beer alternatives. Brand investments in 2014 related to Alchemy & Science, Boston Beer's smaller craft beer production project, are expected to be between $5 million and $7 million. The company admits that the sales volumes of the Alchemy & Science brands probably won't cover its expenses, but management views this as a necessary short-term pain that will bring long-term gains.

During the company's most recent conference call, CEO Martin Roper said, "We are prepared to forsake the earnings that may be lost as a result of these investments in the short term as we pursue long term profitable growth." While the company is focused on the distant future, its short-term earnings might make investors sweat a little.

Current headwinds
During 2013, Boston Beer's supply chain struggled with an unexpected increase in demand for its products. The company reacted by increasing production which raised its operational and freight costs. When this was paired with the rise in ingredient costs the company's gross margin declined to 51% for the quarter and 52% for the year. 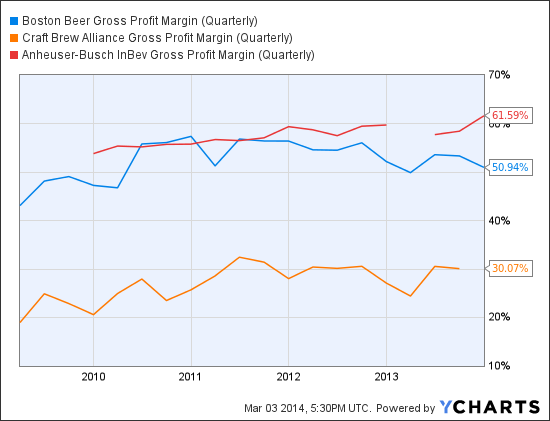 Craft Brew Alliance also experienced a similar situation during its third quarter when its shipments were at an all-time high. This placed a large burden on the company's growing shipping and warehousing operations which increased its cost structure and shrunk its gross margin by 50 basis points.

Boston Beer and Craft Brew Alliance are investing in their growth, which has led to lower margins, but Anheuser-Busch has been improving its margins and its bottom-line results. The world's largest beer distributor recently reported EPS growth of 9.1% driven by cost synergies captured by the company's combination with Grupo Modelo.

Looking toward 2014, Boston Beer has increased its packaging and shipping capabilities as well as tank capacity at its breweries to adjust to increased demand. The company does not expect its gross margin to improve during 2014 with projections landing the statistic between 51% and 53%.

Eye on the prize
Boston Beer's long-term strategy is what Foolish investors like, but it hints that short-term earnings might struggle. With heavy investments in operations and brand expansion, the gross margin should stay level as the company grows sales. It's clear that Boston Beer's management has a vision for the company's future that they will work for without worrying about immediate returns. While this company might not make you rich immediately, it will reap the benefits of its investments as you move toward retirement.