Since Wizards of the Coast released Magic: The Gathering in 1993, the brand has grown to become one of the most popular trading card games on the market. The game is produced by Hasbro (NASDAQ:HAS), which has worked to expand the card game digitally. Hasbro is making strategic choices that will help Magic compete against rival card games like Nintendo's (OTC:NTDOY) Pokemon and Activision Blizzard's (NASDAQ: ATVI) new Hearthstone.

A digital gathering
Magic went digital in 2002 by offering players an adapted version of the card game which offered access to more potential opponents and tournaments. Before the game went online, players were restricted by their geographic locations. However, with online play and a mobile app, they can compete with more people and improve their games on the amateur and professional levels (yes, you can play Magic professionally). Digital game-play grew the brand and this has helped it continue to grow as a star performer for Hasbro as its sales were up over 20% for 2013.

Sales growth for Magic tends to be flat during most quarters with marked increases alongside new product releases. Because of this, Hasbro has continued to invest in Magic's digital presence by providing new content. Duels of the Planeswalkers was recently released and it has become a gateway which has helped new players find the game.

Digital downers
Being online has its potential problems, and in November the game experienced issues that forced the company to suspend daily and premier events for Magic Online. The game's Executive Producer issued an apology by saying, "It's not acceptable for your experience with Magic Online to be anything less than ideal, and we recognize that the system has been having performance issues for quite some time now."

The problems with online play have given Magic's competition an opportunity to attract frustrated players. Activision Blizzard's new game Hearthstone moved to an open beta phase in January and it already has millions of players. Hearthstone is a free-to-play card game that features characters and spells from World of Warcraft. Players can collect cards by playing the game or by paying for them with real money. The company has a lot of confidence in the new game and expects it to become a franchise of the caliber of Diablo, StarCraft, or Warcraft. 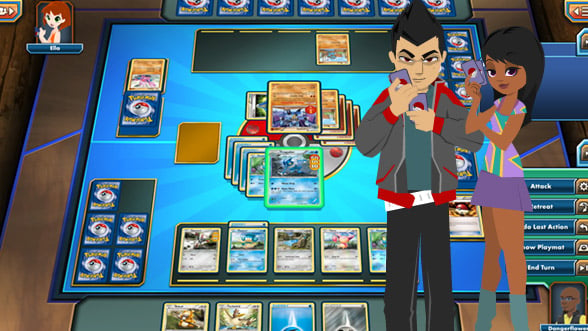 Magic also has competition from the Pokemon trading card game. This game was also developed by Wizards of the Coast and it is based on the popular Nintendo video game. While the game was initially marketed toward younger players, the game players have grown to an average age of 22 according to a study done by Superdata. Nintendo has since taken over production of the card game and the company has used the cards, video games, television show, and movies to make Pokemon one of its strongest brands.

There is no shortage of competition for Magic in the trading card game market, but Hasbro hopes to bring the game to the forefront of entertainment with the release of a new Magic movie. There's not much information on the new movie available, but Hasbro is hoping for another quality film franchise like Transformers. Regardless of the movie's quality, it will hopefully raise awareness and boost Magic's sales around its release.

The mark of commitment
Warren Buffett once said, "Any company that gets its customers to tattoo ads on its chest can't be all bad." While the tattoo shown above isn't on someone's chest, it shows the commitment that fans have to Magic: The Gathering. Moving forward, Hasbro should continue to invest in continued digital expansion and new products for Magic. If the company can produce a successful movie then the game could become a bigger and more mainstream franchise like Transformers. Until then, Magic should continue to deliver solid revenue thanks to its committed fan base.