The total deficit clocked in at $39.1 billion, just $100 million larger than both December's deficit and analyst expectations for January.

Deficits improve in two ways: (1) exports increase more than imports, or (2) imports decrease more than exports. The first scenario is generally favored over the second, as it more directly shows signs of an internally strengthening economy.

January's results show that a $1.3 billion increase in imports just managed to outweigh a $1.2 billion exports bump, meaning no deficit improvement this month. Over the past year, however, things look slightly better. The overall deficit is down $3 billion from January 2013 to January 2014, pushed down by a 3% boost in exports as imports edged up a smaller 1.2%. 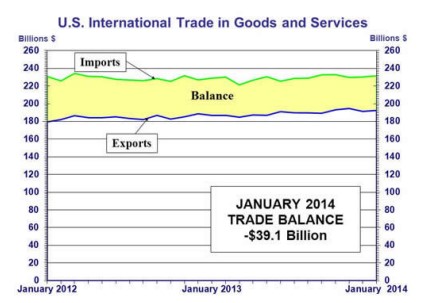 Diving deeper, the services surplus in January expanded $0.5 billion to $20.2 billion. Travel services proved to pack an especially positive punch this month, as imports fell $0.2 billion and exports expanded $0.9 billion. That means foreign visitors purchased more goods and services in the states, while Americans touring abroad cut back on expenditures.

At the same time, the goods deficit deepened $0.7 billion to $59.3 billion. The deepening was primarily due to a $3.7 billion increase in industrial supplies and materials imports. But America wasn't only importing industrial supplies – the category also chalked up the largest exports increase (+$1.2 billion).

The U.S. currently enjoys its largest trade surplus for goods with Hong Kong ($3.9 billion), while it holds a $27.8 billion trade deficit with China. The surplus with Hong Kong is up from $3.3 billion for December while the China deficit figure is up from $24.5 billion.