When Urban Outfitters (NASDAQ:URBN) reports earnings for the fourth quarter of its 2013 fiscal year on March 10, what will the outcome be? This is the same type of question that shareholders of most any company ask at least four times a year.

However, unlike in past years, what Urban Outfitters announces for its quarter might carry some added weight. At a time when retailers like Abercrombie & Fitch (NYSE:ANF) and Aeropostale (NYSE:AROPQ) are struggling to make ends meet, will Urban Outfitters prove to be the exception, or will it follow their lead?

Mr. Market's set the bar low
For the quarter, analysts expected Urban Outfitters to report revenue of $928.4 million. This represents an 8% gain compared to the $856.8 million the company reported in the year-ago quarter. At the time of this writing, management has not revealed what the company's quarterly profits were, but they did give investors a glimpse at revenue. For the quarter, Urban Outfitters generated sales of $905.9 million, clearly missing expectations.

According to its preliminary release, management attributed the lackluster sales to a 4% sales decline in its namesake brand. Fortunately, the 12% jump in sales experienced by its Anthropologie brand combined with the 15.5% rise in revenue for the company's Free People brand helped cushion the shortfall. 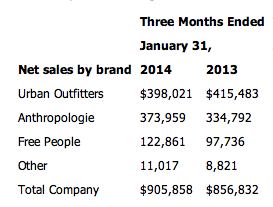 In terms of profits, analysts expect the company to report earnings per share of $0.55. This is a penny lower than the $0.56 the company reported in the year-ago quarter and likely implies that the increase in revenue has come at the cost of lower margins.

But how does Urban Outfitters stack up to its peers?
Over the past four years, Urban Outfitters has done quite well for itself when it comes to revenue. During this time frame, the company saw its sales rise 44% from $1.9 billion to $2.8 billion. Unfortunately, this growth came at the expense of lower profits for shareholders. Between 2009 and 2012, the company saw its net income inch up only 8% from $219.9 million to $237.3 million, as rising costs ate away at margins.

Just like Urban Outfitters, Abercrombie & Fitch has done quite well for itself over the past few years. Between 2009 and 2012, the company's top line rose a whopping 54% from $2.9 billion to $4.5 billion. Just as in the case of Urban Outfitters, the explosive growth in popularity experienced by the company helped its revenue rise to such heights.

Looking at profitability, though, the two companies couldn't be more different. During this time frame, Abercrombie & Fitch successfully staved off higher costs and saw its net income rise from $300,000 to $237 million. Unfortunately, the business has had a difficult time in 2013, as evidenced by an 11.5% drop in sales accompanied by a 58% drop in net income.

The situation facing Aeropostale has been even worse. Over the past four years, the retailer saw its revenue climb only 7% from $2.2 billion to $2.4 billion. From a profitability perspective, the picture is even less pretty. Over this time frame, Aeropostale saw its net income fall 85% from $229.5 million to $34.9 million, driven by the company's cost of goods sold rising from 62% of sales to 75.3%, while selling, general, and administrative expenses rose from 20.8% of sales to 22.2%.

Foolish takeaway
Based on the evidence provided, it looks like Urban Outfitters has had a nice record of growing sales but has done so at the cost of profits. In the short term, this mind-set makes sense because it allows the business to grow its footprint and gain buying power and supplier power. However, in the long run, this approach likely cannot be sustained, especially as revenue growth begins to slow.

For this reason alone, shareholders should be cautious about the company because if the tide turns, it could prove very costly. On the other hand, the Foolish investor can take solace knowing that Aeropostale's record is far worse than Urban Outfitters, while Abercrombie & Fitch's has been better but is worsening. These developments could allow management to swoop in and grab up more market share over time, which could put money into your pocket if you're patient enough.