Please ensure Javascript is enabled for purposes of website accessibility
Free Article Join Over 1 Million Premium Members And Get More In-Depth Stock Guidance and Research
By Adam Levine-Weinberg - Mar 8, 2014 at 8:15AM

J.C. Penney is not as close to breakeven as its recent stock surge would imply!

J.C. Penney ( JCPN.Q ) stock has surged in the past month on rising hopes that the company's turnaround will succeed. Speculators who bought J.C. Penney shares at just the right time have already achieved gains of about 75%! 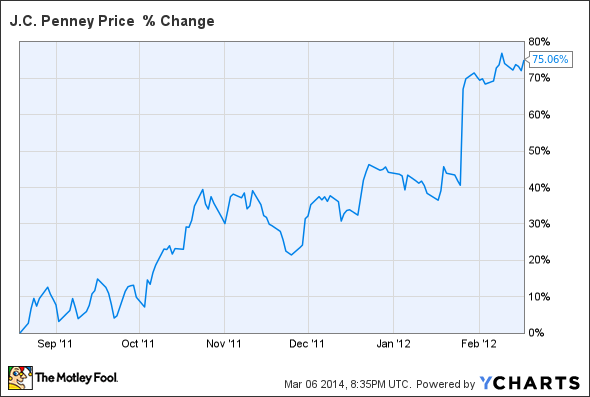 However, that chart doesn't show J.C. Penney's stock performance over the past month. Instead, it depicts the stock's 75% gain between the middle of August 2011 and the middle of February 2012.

At that time -- like today -- the stock flew higher based on hope that a new strategy held the key to turning J.C. Penney around. In hindsight, it's clear that those hopes were unfounded. As a result, the stock has crashed, wiping out all of investors' initial gains and much more. 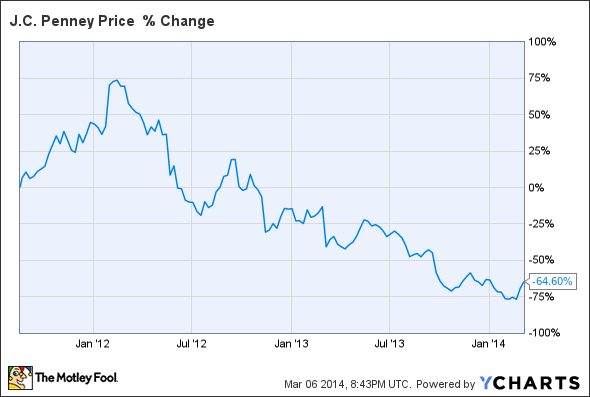 So what will determine whether J.C. Penney stock keeps rising or crashes yet again? It all depends on how quickly -- if at all -- J.C. Penney can get back to breakeven. Today, J.C. Penney is a lot farther from reaching that goal than bulls are willing to admit.

For investment purposes, there are really two different "kinds" of breakeven. The most widely cited metric of breakeven uses standard accrual accounting procedures. Accounting breakeven takes into account historical investments as well as current revenue and expenses and essentially measures whether or not a company is covering its long-term costs.

On the other hand, on a cash basis, breakeven is defined as zero free cash flow. This is also a very important metric for a company in J.C. Penney's situation, because it measures how much cash is being generated or used by the business each year.

The cash breakeven point represents the minimum necessary for financial self-sufficiency. A business that produces negative free cash flow needs to dip into its cash reserves, sell off assets, or borrow money to stay afloat. None of these courses of action can be sustained indefinitely. If not reversed, negative free cash flow will ultimately drive a company into bankruptcy.

Moving toward cash breakeven
Last year, J.C. Penney wasn't even close to the cash breakeven line. When all the damage was added up, the company had burned $2.75 billion. To fund these massive losses, the company sold off some non-core assets, issued a $2.25 billion term loan, and sold about $800 million of new stock.

Luckily, J.C. Penney should be able to improve its cash flow position substantially in 2014. First, whereas the company spent $951 million on capital expenditures last year, it plans to cut its capital budget to just $250 million this year. Economizing on capital spending is one of the most common ways that companies can shore up cash flow.

Second, J.C. Penney added $600 million in inventory last year, which was a significant drag on cash flow. This year, J.C. Penney is likely to reduce its inventory as it discontinues unpopular products and closes some stores. These two changes combined should reduce J.C. Penney's cash burn to a little over $1 billion.

J.C. Penney hopes to reduce its inventory this year.

To get the rest of the way to cash breakeven, J.C. Penney will need to improve its core earnings. The company currently expects mid-single-digit comparable-store sales growth and significant year-over-year gross margin improvement, which will certainly help. However, J.C. Penney is still unlikely to reach cash breakeven this year.

Operating expenses may decline modestly to $4 billion in 2014, while interest expense is on pace to hit $400 million and the company plans $250 million in capital expenditures. If sales rise 4% this year -- which would take comparable store sales growth of 5%-6% due to planned store closures -- and J.C. Penney reduces its working capital by $300 million, gross margin would need to rise to more than 35% to reach cash breakeven.

By contrast, gross margin was 29.4% last year, and 31.3% the year before that. While a 35%-36% gross margin should eventually be achievable, there is no reason to expect an immediate return to this level based on recent margin trends. In a more plausible scenario, J.C. Penney may reach cash breakeven by 2015 or 2016, if sales and gross margin continue to improve over time.

Accounting breakeven is far away
While J.C. Penney may be able to reach cash breakeven in a year or two, the company is likely to continue posting losses in its official financial statements for years to come. First, improvements in working capital can provide cash, but they don't affect earnings. J.C. Penney plans to limit its cash burn this year by reducing working capital, but that won't mitigate its accounting loss.

J.C. Penney has put a lot of money into CapEx in the last two years.

Thus, while J.C. Penney might be able to stem its cash burn as soon as 2015, it would still book a substantial loss. Last August, I estimated that J.C. Penney would need to increase sales to the $14 billion-$15 billion level to break even. Because of a good pension plan performance in 2013, it now looks like the bottom of that range would be sufficient.

That's still 18% ahead of J.C. Penney's sales last year. J.C. Penney is projecting mid-single-digit comparable-store sales growth this year, which would leave the company with an accounting loss approaching $1 billion. Growth is more likely to taper off than to accelerate beyond 2014.

While CEO Mike Ullman is still paying lip service to the goal of "profitable growth" going forward, the fact is that mid-price department stores are a declining business. Off-price retailers such as TJX ( TJX 0.30% ) offer a much more compelling value proposition for cost-conscious consumers.

J.C. Penney's revenue had stagnated even before 2012 -- i.e., before Ron Johnson's disastrous experiments -- because of these secular pressures. Off-price competition will only become stronger over time. As a result, these stores will continue taking market share from mid-price department stores such as J.C. Penney, Kohl's ( KSS -1.92% ), and Sears Holdings' ( SHLDQ ) Sears stores over time.

Foolish wrap
J.C. Penney is racing for breakeven -- and if things go its way, it could get there on a cash basis as early as next year. However, even if J.C. Penney can keep its cash flow at breakeven or a little better, it will only be through holding down capital expenditures.

EPS -- which is an accounting measure -- will remain negative for the foreseeable future. In fact, given the secular pressures facing J.C. Penney (and mid-price department stores more generally), it seems doubtful that J.C. Penney will ever return to sustainable profitability.

From this perspective, the rally in J.C. Penney shares looks like a dead-cat bounce. J.C. Penney is still one wrong move from being forced into bankruptcy. Even if it manages to stay solvent for the next few years, it's unlikely to achieve the roughly 20% comparable-store sales growth it would need to reach breakeven within any reasonable period of time.