A degree may open doors, but once hired, the college educated also experience wage stagnation

"I think I'm due for a raise. I have a college degree..." Photo: bpsusf

There's little doubt that obtaining a four-year college diploma is a real necessity in today's job market, despite the rising cost of higher education. Sadly, once college graduates join the ranks of the gainfully employed, their salaries tend to stagnate – just like everyone else's.

Salaries haven't risen in over 10 years

As many states and the federal government consider raising the minimum wage, it's notable those workers earning the least aren't the only ones that haven't had a raise in several years. Even college graduates have found their salaries have flatlined over the past decade or so.

Workers with less than a four-year college fared much worse, though the differences between high-school graduates and those with "some" college are surprising: the former group saw pay dip by 1.6% between the years 2000 and 2012, but the latter endured wage disintegration of 5.1% during the same time period.

So, why haven't workers been rewarded? If you think employers can't afford to give out raises, think again. In manufacturing, for instance, net profits have more than tripled since 2009, while the pay for workers in the sector has actually fallen by 3%.

Manufacturing isn't alone. As this chart from the Federal Reserve Bank of St. Louis shows, U.S. corporate profits have been growing steadily since about 2000 or so, except for the Great Recession: 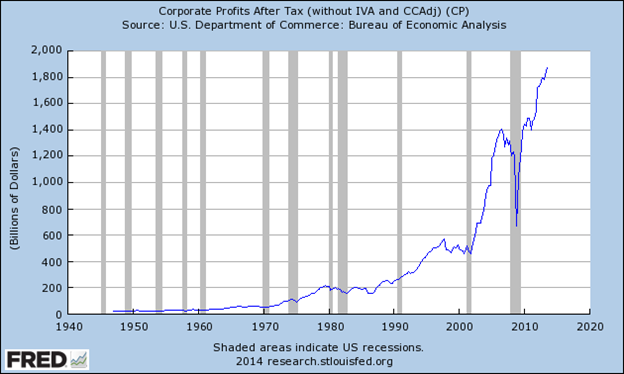 Unfortunately, this trend shows no signs of abating, and workers themselves have few options in the still-tenuous economic climate. Currently, the only remedy is for college students to pursue graduate degrees – the one group, according to EPI, that has seen wage appreciation in the years 2000 to 2012 of 5.4%.

Hopefully, an increase in the minimum wage will prompt a boosting of all salaries to some extent, in a sort of trickle-up scenario. Otherwise, wage stagnation looks like it is here to stay.