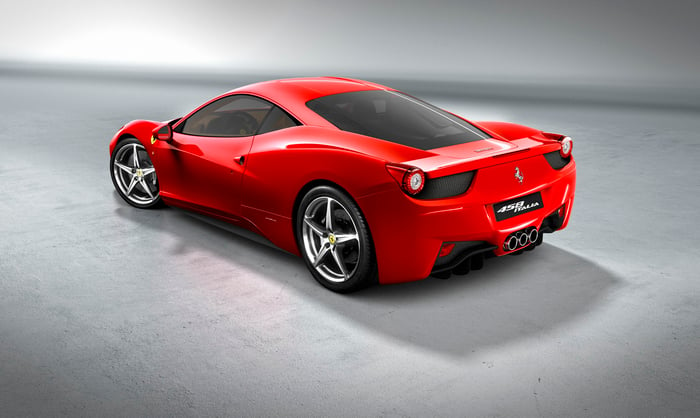 Ferrari's 458 Italia is one of the world's most coveted sports cars. Ferrari has been taking steps to make them even more exclusive. Photo credit: Ferrari S.p.A.

It doesn't make sense that falling sales could be good for an automaker. Does it?

It does in the crazy world of Ferrari. The hallowed sports-car maker is one of Fiat Chrysler Automobiles' (NASDAQOTH: FIATY) crown jewels, a steady source of big profits year after year. Last year, profits were up big and revenues hit an all-time high -- but sales totals were down.

What's the deal? In this video, Fool contributor John Rosevear digs into Ferrari's finances and explains why Ferrari's choice to limit sales -- yes, limit sales -- is a wise move in the long run.

A transcript of the video follows.

John Rosevear: Hey, Fools, it's John Rosevear. We've been talking a lot lately about this new automaker, Fiat Chrysler Automobiles, or FCA. This is, of course, the company that has come into being as a result of the merger of Fiat and Chrysler, and we expect this company's stock to be listed on the New York Stock Exchange sometime in the near future, probably this fall. So it's of increasing interest to U.S. investors, and so we at the Fool have been taking a closer look under the hood at FCA.

One of FCA's most profitable brands -- really, one of the entire auto industry's most profitable brands -- is Ferrari. Now, we all know what Ferrari is, they make what are probably the most lusted after sports cars int the world. But it's interesting to look at Ferrari's finances. Ferrari's profits were up 8% last year to 363.5 million euros, which helped to offset big losses at Fiat. Its revenues were up 5% to 2.3 billion euros. That's just under $3.2 billion, and it's a record for Ferrari.

But what's interesting is that Ferrari's deliveries -- its total number of vehicles sold -- was actually down 5%. Ferrari delivered 6,922 vehicles last year. Now, that drop in total deliveries has led some people to wonder if Ferrari's business is weakening. But there's actually a remarkable back story here. Ferrari has seen rising sales for several years. They've done well in China. In some ways, the brand is more popular than ever around the world.

But Ferrari's management actually had mixed feelings about this. On the one hand, rising sales are good because it should in theory mean more profits, right? But on the other hand, Ferrari Chairman Luca di Montezemolo was said to be concerned that Ferrari was at risk of losing its exclusiveness. For lots of ordinary folks who like cars, spotting a Ferrari somewhere is kind of an event, a treat. If they get too common, they'll just be cars.

Think of a company like Aston Martin, which used to be spoken of as a Ferrari peer, but now Aston has a line of more affordable models and they're a lot more common than they used to be, and some analysts think they've kind of dented their brand. And the concern isn't just that it would undercut Ferrari's brand mystique, but that it might undercut Ferrari's pricing power -- its fat profit margins, which are in the 15% range, and have been even higher at times in the past.

So Ferrari made the decision to cut its production, even though demand for Ferrari's cars was already exceeding supply, and even though the wait for a new Ferrari after you order it is already many months. This should, in time, allow Ferrari to charge even higher prices, boosting its profit margins, while building fewer cars. That's a great move if you can pull it off, and I don't know whether any brand but Ferrari could. Thanks for watching, and Fool on.