Since Feb. 25, when it was released, more than 18 million have tuned in to the second trailer for the 2014 remake of Godzilla. This time, instead of vague references to the monster, viewers get an up-close look at his on-screen power -- and the terror it inspires in actor Bryan Cranston, who only recently was terrifying others as the meth kingpin known as "Heisenberg" in Breaking Bad. Will the combination thrill audiences?

Host Ellen Bowman puts this question to Fool analysts Nathan Alderman and Tim Beyers in this week's episode of "1-Up on Wall Street," The Motley Fool's Web show in which we talk about the big-money names behind your favorite movies, toys, video games, comics, and more.

Tim says the combination holds promise. Meanwhile, reaction to the trailer has him wondering if the dour prediction he offered at the end of last year are off the mark. With multiple monsters and a clever hook for putting them in play, Godzilla could have appeal well beyond the hard core fans who saw last summer's similar epic -- Pacific Rim, also co-produced by Time Warner (NYSE:TWX) and Legendary Pictures -- in theaters. 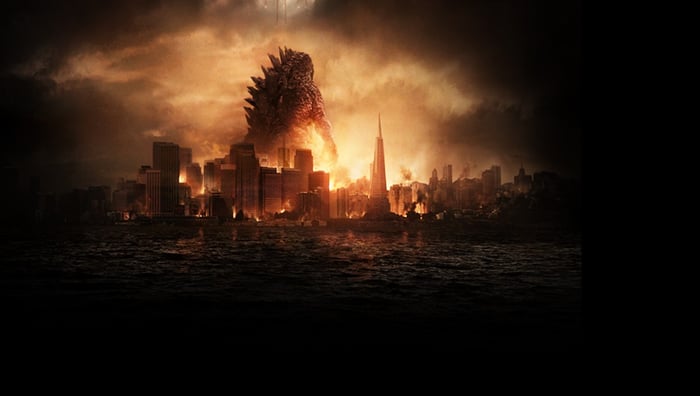 Fan reaction suggests that Godzilla may stomp the competition when the monster enters theaters on May 16. Credit: Legendary Pictures.

Nathan says fans and investors shouldn't expect a blockbuster, but a flop also seems unlikely. Director Gareth Edwards turned heads with 2010's Monsters, which earned $4.24 million worldwide on a $500,000 production budget -- a profitable mix even after accounting for marketing, distribution, and theater operators' cut of the proceeds. Godzilla gives him a bigger stage upon which to showcase his talents. So far, more than 18 million want to see what he's come up with.

Now it's your turn to weigh in. What did you think of the second trailer? Are you planning to see Godzilla when it reaches theaters on May 16? Please watch the video as Ellen puts Tim and Nathan on the spot, and be sure to check back here often for more "1-Up on Wall Street" segments.