This latest buy brings Berkshire Hathaway's total ownership of DaVita to a hefty 17.7% -- valued around $2.5 billion. That's a lot of treasure. So, why does Buffett love this stock so much?

He loves it, he loves it not
Actually, Buffett didn't buy those shares of DaVita last week for Berkshire Hathaway. Ted Weschler signed the dotted line for the additional stock. Weschler joined Berkshire in late 2011 as a portfolio manager after a successful stint with hedge fund Peninsula Capital Advisors, where he served as managing partner.

So, does this mean Warren Buffett really doesn't love DaVita after all? No -- but the relationship is a little more complicated.

Buffett doesn't entrust billions of dollars to just anyone. Over the past few years, he carefully screened potential investment managers to bring on board. That process led to the hiring of Weschler and Todd Combs, who had led hedge fund Castle Point Capital from 2005 to 2010.

In speaking with CNBC, Warren Buffett said that Todd Combs and Ted Weschler "think about investments like I do." That's high praise indeed for an investment manager. So, while Buffett didn't technically buy DaVita shares himself, he provided billions to Ted Weschler to do so, no doubt largely because Weschler looks at many of the same criteria Buffett looks at when deciding which stock to purchase.

Three ways to Ted's heart
What is it about DaVita that appeals to Ted Weschler (and presumably to Warren Buffett as well)? Weschler listed three things he looks for in any health care investment.

First, he wants the company to deliver better quality of care than can be found elsewhere. Fresenius Medical Care (NYSE:FMS) is actually the largest dialysis provider in the world, with 3,200 dialysis centers, compared to DaVita's more than 2,100 centers. However, it's fair to say the two companies are in a league of their own. Together, they command over 70% of the U.S. market.

Second, Weschler thinks any investment in the sector should provide services that lower the total cost of health care. For many patients, the only viable alternative to receiving the dialysis care that DaVita and others provide is to have a kidney transplant, which can run up bills of more than $260,000.

Higher return on capital, however, is a different story. DaVita's return on capital has dropped in the last couple of years, to around 4.4%. That's lower than its larger competitor Fresenius. On the other hand, DaVita beat out Berkshire Hathaway for much of the past five years in terms of return on capital. 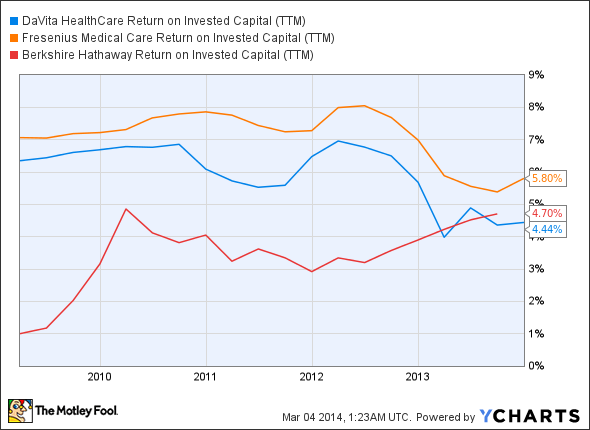 Second that emotion
There are several big factors working in DaVita's favor in the years ahead. Americans are aging, and conditions such as diabetes and high blood pressure, which can ultimately lead to kidney failure, are increasingly prevalent. DaVita's services should be in high demand for a long time to come.

DaVita could also benefit from a new drug potentially on the way to market from its partner, Rockwell Medical (NASDAQ:RMTI). Rockwell believes its Triferic could reduce the need for expensive erythropoiesis-stimulating agent, or ESA, drugs by 35%. With ESAs making up a significant part of DaVita's dialysis expenses, regulatory approval for Triferic should translate to lower costs. Of course, it remains to be seen if Triferic wins that approval.

Since the beginning of 2012, DaVita's shares have gained more than 75%. The company expects 2014 will be more profitable than it initially thought. I think Berkshire has good reason to expand its holdings in DaVita.