Ulta (NASDAQ:ULTA), the largest beauty retailer in the United States, has widely under-performed the market and traded erratically in 2014. The weakness began after Ulta's disappointing third-quarter report in December and its shares have remained weak since then. Investors are hopeful that the stock will get back on track following its fourth-quarter report, so let's take a look at the current expectations and determine if we should buy Ulta right now or if we should wait to see what the report holds. 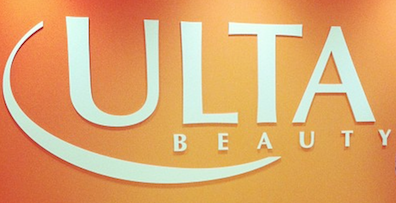 The last time out
Dec. 5 brought Ulta's third-quarter report and it was a heart-breaker for investors. Here's an overview of the quarter and a year-over-year comparison:

Ulta's earnings per share increased by 18.6% and revenue increased by 22.4% year-over-year, but these both narrowly missed analyst expectations. To make things much worse, Ulta then cut its earnings outlook for the fourth quarter which caused a major sell-off. The company sees fourth-quarter earnings per share in the range of $1.07-$1.10 on revenue of $853 million-$867 million when analysts had expected to hear earnings of $1.24 per share on revenue of $895 million. The combination of a miss on earnings and a reduced outlook caused Ulta's shares to plummet over 20% in the next trading session and they have remained weak. Ulta now sits more than 30% below its 52-week high.

Expectations & what to watch for
Fourth-quarter results are due out after the market closes on March 13 and analysts expect moderate year-over-year growth. Here's a breakdown of the current estimates:

These estimates call for the company's earnings per share to increase by 7% and revenue to rise by 13% year-over-year, well below the 20%-plus growth we are used to seeing out of Ulta. Other than the key metrics, it will be important to keep an eye on three things: the gross margin, the market conditions in the first two months of fiscal 2014, and guidance for fiscal 2014:

Overall, this is the weakest set of earnings expectations we have seen for Ulta in many years, so I am confident that the company will at least match the estimates. I think better-than-expected customer traffic will offset the revenue lost from promotions and result in revenue growth of over 15%; the margin will take a hit, but I think the positives will outweigh the negatives here. With this said, if Ulta can deliver on earnings and provide solid guidance for fiscal 2014, we could see the stock slowly push back toward its 52-week high; however, if the opposite comes true, the stock could set a new 52-week low. For this reason, Foolish investors should be very cautious and wait until after the release to consider initiating positions.

How has the competition fared?

A few weeks ago, Ulta's largest competitor in the beauty industry, Sephora, reported quarterly results of its own. Sephora is owned by Louis Vuitton Moet Hennessy (OTC:LVMUY) and it is the market leader in France, Italy, and Russia. It also has growing presences in North America, Latin America, the Middle East, and China. Louis Vuitton released its fourth-quarter results on Jan. 30 and Sephora's results are reported within the company's selective retail segment, so we will focus on that segment's results; here's how the segment performed:

Revenue from selective retail increased by 8% year-over-year, driven by sales growth and market share gains in all of Sephora's regions. The company noted that sales in both stores and the online channel gained strength and that it has been innovating in order to offer more products and services, which has resulted in a more personalized experience for the customer.

In terms of expansion, Sephora now operates over 1,300 stores worldwide and says it has "an expanding base of over 300 stores across North America." This could be seen as a direct threat to Ulta, but Ulta's expansion is also a threat to Sephora; regardless, I believe the two can grow in harmony for the time being. However, if you are looking for a pure play on the beauty industry, Ulta is the company to own.

The Foolish bottom line
Ulta was once one of the market's top high-growth stocks, but its growth has become a cause for concern since its third-quarter report. Its fourth-quarter results are due out shortly and I believe the current expectations are well within reach, especially since the company's products were in high demand during the holiday season. However, Foolish investors should be cautious and wait until after the release before initiating any new positions; this way, we will have the most up-to-date financial information so we can make educated decisions on the health of the company and the condition of the industry.