A draft paper injects probability theory into the precautionary principle. Does it finally prove GMOs from Monsanto will doom the Earth, or did this modern-day thinker get ahead of himself?

Nassim Taleb, one of my favorite authors and thought donors alive today, is making my efforts to spread knowledge about the benefits of genetic engineering pretty difficult. I've read all of his books, from The Black Swan to Antifragile, and absolutely respect his dedication to schooling so-called experts on economics and risk management. His logic-based dismissal of ignorant (to history, reality, and the validity of their financial models) and unapologetically bullish Wall Street analysts captures the Foolish attitude in many ways. It's pretty hilarious, too.

What isn't so hilarious is that his characterization of the risks associated with genetically modified organisms, or GMOs, as they are released into the environment lends an air of credibility to the anti-GMO movement. Many, including those that don't know a thing about Taleb, will loosely mention his name or well-thought out idea in an attempt to capture credibility for their own arguments without fully understanding the message. Fellow Fool Brian Stoffel -- not one of those people -- brilliantly described Taleb's views on the systemic risks presented with the planting of GMO crops developed by agricultural biotech companies such as Monsanto ( MON ), Syngenta (NYSE: SYT), Dow Chemical ( DOW ), and DuPont ( DD ).

It may be easy to dismiss Taleb by saying he doesn't understand biology and leave it at that, but that's not a productive argument. Let's review what he is and isn't saying about GMOs.

What Taleb is and isn't saying
Brian did an excellent job of describing Taleb's views, but it's important to reiterate them here. A recent draft paper (link opens PDF) by Taleb, Yaneer Bar-Yam, and Rupert Read presents a non-naive interpretation of the precautionary principle. Rather than use it to justify acts of paranoia -- as is commonly done -- the three are applying probability theory to describe risks in which a lack of statistical evidence exists due to a lack of time. Think about it: by the time enough evidence piles up to expose a risk it may be too late. These "ruin" problems can be the large-scale deployment of nuclear energy or the widespread use of GMOs, according the paper.

Taleb argues that the chance of ecocide, or the destruction of the environment and potentially humans, increases incrementally with each additional transgenic trait introduced into the environment. He's not saying that human ignorance to the potential risks presented by GMOs will doom the planet by 8:34 a.m. on Aug. 13, 2082 -- choreographing potential events as absolute certainties as many financial pundits do. Nor is he specifying which trait or traits will combine to cause which specific environmental disaster. Taleb doesn't deal in specifics; he deals in probability, but that doesn't take away from the validity of his argument. He's simply saying that given enough time and enough new traits (or ignorance) something big, such as ecocide, is almost guaranteed to occur.

Is Taleb wrong about genetic engineering?
Unfortunately for those looking to refute Taleb, it's impossible to argue with probability theory itself. Many have failed in their attempts over the years -- whether they know it or not. In the sense that an environmental (not health) calamity related to GMO use is almost certain to occur given enough time, Taleb is right. We can't sit here and go through each trait and how it interacts with the environment because all it takes is one unknown interaction to spell disaster. That's the point of Taleb's argument. Brian conjured up the following graphic for illustrative purposes only to serve as a visual for the argument. 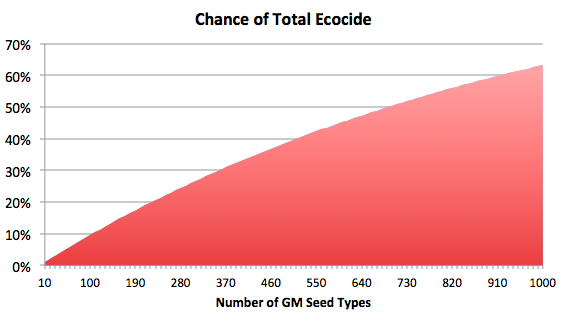 However, no one knows where the ecocide barrier resides on the graph or how many traits need to be introduced (the slope of the graph) for the barrier to be crossed. That doesn't change the probabilities of disaster, but it's important to remember that Mother Nature is a robust system with its own set of checks and balances. Saying that ecocide is a certainty given enough time does not account for the fact that, given enough time, Mother Nature will effectively neutralize any "leaked" traits, whether through dilutive mutation or selection. Of course, that doesn't disprove that an ecocide from GMOs could occur, but saying that such an ecocide could destroy the planet is an irresponsible claim. That's where I believe Taleb is wrong.

The natural environment has encountered new traits from similarly unthinkable events (extremely rare occurrences of genetic transplantation across continents, species, and even planetary objects, or extremely rare single mutations that gave an incredible competitive advantage to a species or virus) that have led to ecocides and genetic bottlenecks in the past -- yet we're all still here and the biosphere remains tremendously diverse. And it didn't take decades, centuries, or millennia for Mother Nature to bounce back. It took a matter of years. Consider, as one shining example, the surprising robustness of ecosystems within Wormwood Forest in the Chernobyl exclusion zone to see the incredible, natural system of checks and balances work its magic.

Foolish takeaway
I'm not arguing that the mathematic characterization of the systemic risk presented by GMOs on an infinite timescale is inaccurate, as many others will unsuccessfully attempt to do. Taleb may not be a biologist, but you simply can't argue with probability theory as presented. Could you try to explain various biological principles to support an argument in favor of GMOs? Absolutely, but you still won't be able to account for the unknown risks.

Either way, it's wrong and irresponsible to suggest that an ecocide caused from GMOs could wipe out life on Earth. It only works to foster a mistrust in science and adds no value to the broader debate. Then again, I suppose Taleb could argue that just because life hasn't been wiped out by a genetic calamity in the past, whether created by man or nature, doesn't mean the probability of the event occurring is zero. That's the problem with arguing against probability theory.