Anyone who's pulled back the tab opener of a cold aluminum soda can, only to hear the silence of a carbonated drink gone flat, can understand how Coca-Cola (NYSE:KO) investors feel at this moment. Coca-Cola's fourth-quarter and full-year earnings report was met by hearty skepticism last month. The company's stock is down 6.7% year to date, versus a gain of 1.6% for the S&P 500. Coke's last 12 months of stock performance must also be leaving a flat taste in investors' mouths: The company's shares have lost 1.7%, versus the broader market's climb of 21%.

By now it's well established that sales of Coca-Cola's flagship sweetened carbonated beverages are declining as consumers look to healthier, thirst-quenching alternatives. Coca-Cola has pushed heavily in recent years to increase sales of bottled juices, waters, energy drinks, coffees, and teas to revitalize its sales.

Yet the company has also unflinchingly maintained a business model that keeps Coke at the front and center of its revenue stream. Is management leaning too heavily on its belief in the long-term invincibility of brand Coca-Cola? In light of yet another bland quarterly report, CEO Muhtar Kent's reverent language when describing Coke during February's earnings conference call seemed tonally incongruous with the increasingly lackluster results of the past few quarters:

There is quite simply no other brand in the world like Coca-Cola, the world's most universal beverage brand. We are fortunate to be its stewards. And indeed, in many markets around the world, brand Coca-Cola remains magical but we need to work even harder to enhance the romance of the brand in every market around the world.

Much is contained in the CEO's flowery and effusive praise for his company's major product. Kent is correct when he says that his team and the company's employees are stewards of the brand. Coke is one of the most dominant and valuable trademarks on earth, and it will continue to prosper for decades to come. Yet this language highlights the company culture surrounding Coca-Cola. The view of Coke as sacrosanct could be detrimental to the company's long-term prospects. 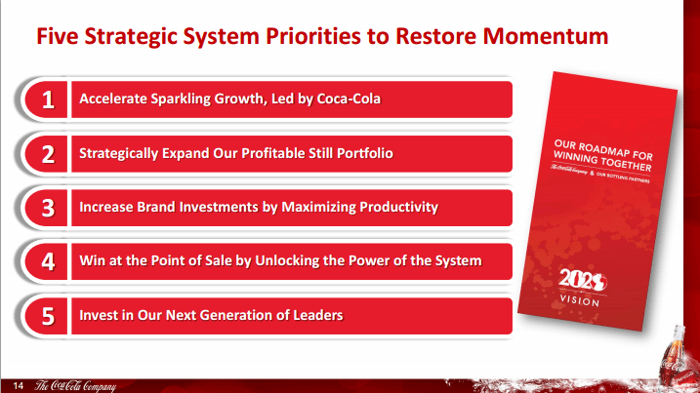 The first priority, to accelerate "sparkling" (carbonated) growth, is a resolute echo of one of the pillars of Coca-Cola's "2020" strategy to double systemwide sales by the year 2020. As I've written about previously, the original plan calls for Coca-Cola Incorporated to "accelerate growth of Trademark Coca-Cola, the epicenter of our business."  At the conference the company supported this view by offering substantial evidence. It pointed out that if you split up brand Coca-Cola by geography, it's like having 19 "billion-dollar brands" in 19 different countries. The company also highlighted that it has added 1.1 billion unit cases of Coca-Cola to annual sales since 2010, reaching 11 billion unit cases last year, the equivalent of "adding a Brazil ... in four short years." While this volume is impressive in absolute numbers, the implied compound annual growth rate of brand Coca-Cola over those four years is only 2.7%. We know from the fourth-quarter earnings report that this growth rate must be still be declining, as brand Coca-Cola grew by only 1% last year.

The fall-off in the growth rates of sparkling beverages and brand Coca-Cola has coincided with lower margins and lower return on invested capital for Coca-Cola. As recently as the mid-2000s, Coke generated gross margins in the 64%-65% range. These margins have dwindled steadily: Today a typical quarter sees a gross margin closer to 60%: 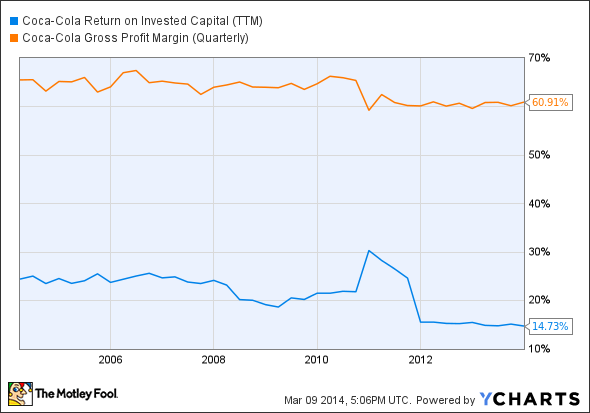 Some factors behind this decline are easy enough to discern: As consumers have become more tight-fisted since the recession of 2008-2009, Coke and other consumer goods companies have lost some of their ability to match inputs (raw materials) increases dollar for dollar with price increases. Fiercer competition for crowded shelf space also pressures Coke to adjust its pricing in various markets to incentivize sales.

Yet one can't help but wonder if Coke is allocating an expanding share of its marketing dollars to keep "accelerating growth of TradeMark Coca-Cola." Pumping in marketing dollars against declining demand could be one culprit behind the shrinking margins. The company is a relentless marketer of its trademark. We can be certain that a significant portion of the $1 billion in productivity savings to be allocated to marketing over the next few years (which the company announced in February), will be dedicated to promoting Coke.

Is the path of least resistance to flip priorities 1 and 2?
In contrast to power brand Coca-Cola, and similar carbonated, sugary power brands like Sprite and Fanta, the company has 11 "still" billion-dollar brands, some of which have been scaled up to the billion-dollar mark rather quickly. A great example is Latin American juice brand Del Valle, which saw its sales double in four years, from $500 million to more than $1 billion, after Coke acquired it in 2007 and expanded distribution from three to 15 countries. Coke's pipeline of future billion-dollar brands (defined by the company as having annual sales between $0.5 and $1.0 billion) stands at 20, according to the CAGNY presentation.

The company's own success with a variety of still categories demonstrates where future growth lies. As Kent mentioned during his remarks at the investor conference, Coke is the dominant juice company worldwide and has captured one-third of the volume growth in this category over the past three years. You may have never tasted or heard of Georgia coffee, but the company sells more than a billion dollars of this bottled beverage each year in Japan alone. In yet another example, Coke's bottled tea sales have recently increased by double digits, and the worldwide market opportunity for bottled tea (by Coke's own estimates) will approach $40 billion by 2020.

What would happen if Coca-Cola incrementally eased marketing of its flagship brand, and made the growth and promotion of still beverages its first priority? We'd probably see an even lower growth rate for sales of Coke and Diet Coke, which is a trend that seems to contradict the very grain of company belief and culture. Allowing Coke sales to remain flat or even decline a percentage point or two would free up marketing spend to lift distribution in any number of fast-growing categories, and might well be worth the sacrilege in the long term. In fact, it may be the path of least resistance. It appears that billion-dollar "still" brands are on a march to outnumber the 19 geographical Coca-Cola billion-dollar-sales countries by 2020, which is now just six short years away.