Shares of Staples (NASDAQ:SPLS) were pounded last week, finishing down by more than 15%. To put that in perspective, it was the worst performance on the S&P 500 (SNPINDEX:^GSPC) by nearly 10%.

The reason for the fall was simple. On Thursday, the office supply retailer said it will close 225 stores over the next two years. That equates to roughly 12% of its North American locations.

"We're certainly not happy with our fourth quarter results," said CEO Ronald Sargent. "Our customers are using less office supplies, they're shopping less often in our stores and more online, and the focus on value has made the marketplace even more competitive." 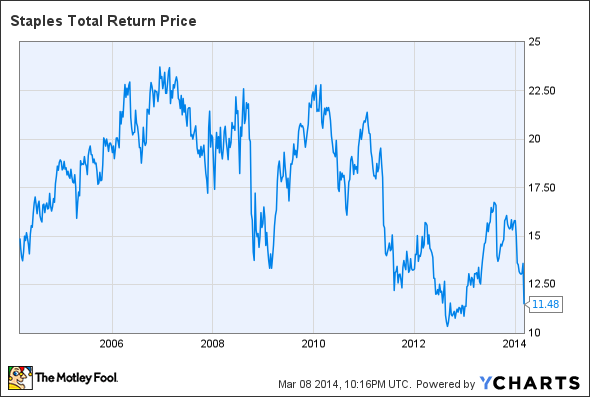 What's the answer to Staples' travails? While the market's reaction on Thursday doesn't imply it -- that's when the majority of the week's decline took place -- the retailer is taking the appropriate measures.

Roughly half of its sales come from Staples.com, and, as the above announcement makes clear, it's steadily reducing its bricks-and-mortar presence. In short, this is the only viable way to survive and perhaps even thrive in the e-commerce era.