In a bit of he said, she said... he said, iron ore mining giant Cliffs Natural Resources (NYSE:CLF) announced it was indefinitely delaying it's annual shareholders meeting originally scheduled for May at the request of the hedge fund seeking to split the company in two -- only to be blasted by the activist shareholder for having made that move.

Casablanca Capital, which owns a little more than 5% of Cliffs' stock, has called for the miner to bundle its troublesome but still promising Bloom Lake project in eastern Canada with its international assets that are largely focused on the Asia-Pacific market and spin them off into a separate company called Cliffs International. It says the remaining U.S.-based assets ought be assembled into a master limited partnership that would pay a dividend double its current size.

A number of mining companies have organized themselves into MLPs, mostly in the coal industry, such as Alliance Resource Partners (NASDAQ:ARLP), which bills itself as the first publicly traded coal-oriented MLP and SunCoke (NYSE:SXC), which went public last year.

The hedge fund has nominated a full slate of six candidates -- mostly industry executives but two finance guys as well -- and took the miner to task for suggesting it had anything to do with delaying the shareholders meeting.

The board that owns virtually no shares and has presided over an 80% value destruction is in our view showing its true colours by indefinitely postponing a shareholder vote and falsely suggesting that the delay was advocated by Casablanca. We look forward to engaging in a substantive dialogue with other Cliffs shareholders.

That caused Cliffs to return fire, telling the hedge fund it ought to introduce its left hand to its right one because it was Casablanca's chairman that made the request during a phone call between him, the hedge fund's CEO, and the miner's chairman. In fact, Cliffs says it's willing to give Casablanca two seats on the board of directors, plus a third candidate that is mutually agreeable to the two of them, so it's a bit disappointing the hedge fund wants to run this dialogue out in public, particularly since its representation is "entirely disproportionate" to the amount of stock it owns thus not offering long-standing stakeholders any sort of "control premium."

Part of Casablanca's call for a new direction and a new board of directors has been a lack of skin in the game on the part of management, which owns a paltry amount of company stock, and have barely made any effort to purchase any shares with cash (less than 3,500 as a matter of fact). Further, although iron ore has lost a third of its value over the past three years and the S&P Metals & Mining ETF fell 40% in that time frame, Cliffs shareholders have suffered a sickening plunge of nearly 80% -- all the while the stock market soared 47%. 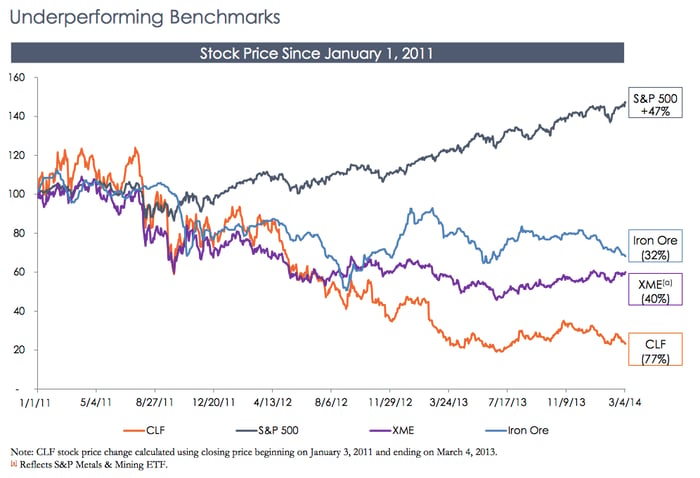 Yet it's not certain that calving off the Asian-focused assets will benefit to the miner. Cliffs has long said it views its greenfield Bloom Lake project as the core of its future growth, though it has suffered delays, rising costs, and setbacks. With China's economy slowing, there are heightened risks with retaining it, but the U.S. economy isn't looking so robust either and putting all the miner's eggs in one basket carries substantial risk as well.

MLPs continue to be popular with investors looking for an easy way to generate income, because they typically make a ton of cash every quarter and distribute it all to their unitholders. Wash. Rinse. Repeat.

Yet the origins of MLPs lie in fixed-assets plays like oil and natural gas pipelines and storage facilities that essentially collect a toll for every barrel of oil equivalent transported through their system. They work because they don't rely on the price of the underlying energy source, instead collecting revenues based upon long-term contracts. Regardless of oil's price, the toll must be paid.

Others are more of a hybrid, using the same model as the pipeline operators, but with businesses highly dependent on the price of underlying energy or commodity making them riskier investments than those founded on the toll-road model. And with Cliffs being a business dependent on cyclical industries, margins could slide even more quickly and whatever tempting yields a heightened dividend might pay, they could evaporate even just as rapidly.

It's clear the two sides in this battle for control aren't on the same page, but Cliffs Natural Resources is saying the one hand of Casablanca Capital doesn't even know what the other is doing, or at best it's being disingenuous in denying its role. Now we can wait to find out what the hedge fund says next in this war of words.