The telecom sector is an income investor's dream. Multiple companies offer yields of at least 4%, and each company offers its own positive and negative attributes. However, when it comes to Verizon Communications (NYSE:VZ), there are several reasons to believe that this company's dividend could easily double in the future.

The growth driver that everyone knows
It's no secret that Verizon Wireless has been a big driver behind the company's growth in the past, and will continue to be in the future. With Verizon taking total control of this division, investors should expect even better results from Verizon Wireless.

No longer distracted
Now that Verizon Wireless will be wholly owned by Verizon, the company can focus on growing this business, rather than managing it to make payouts to Vodaphone. If you look at Verizon's dividend growth rate over the last several years, you can almost see the company being conservative because it knew a dividend to Vodaphone was expected. 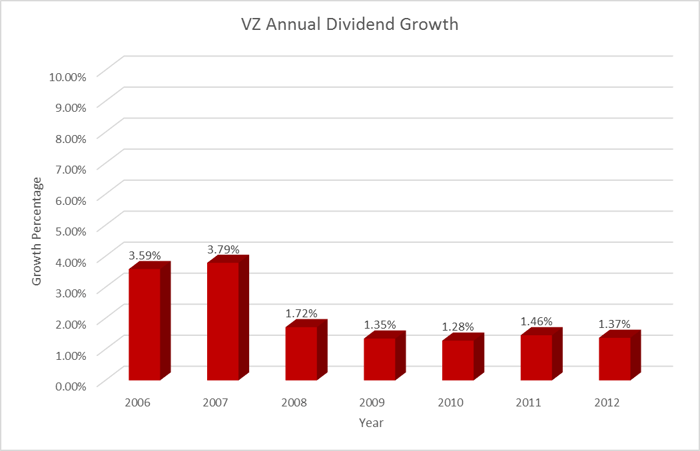 With dividend increases in the last few years hovering below 1.5%, investors haven't had a lot to cheer about. Some investors might even think that going with a higher-yield stock would make sense. A local telecom like CenturyLink (NYSE:LUMN) might be a good candidate.

CenturyLink offers a yield of nearly 7%, and as of last quarter had a core free cash flow payout ratio of roughly 52%. The company appears to be improving its operations, as revenue declined only slightly and management is forecasting strong free cash flow next year as well.

How could the dividend double?
The claim that Verizon's dividend could double is based on a few factors. First, Verizon's payout ratio is significantly lower than its peers. In the last three years, Verizon's average core free cash flow payout ratio has been just under 38%.

In the current quarter, Verizon's payout ratio dropped to just over 25%. By comparison, we already know that CenturyLink's ratio was 52%, and AT&T's payout ratio was just under 61% last quarter. Most investors would suggest that a payout ratio of 60% or less in the telecom sector is a sustainable number. Of course the caveat is that Verizon is issuing about $60 billion in stock to purchase the part of Verizon Wireless it doesn't already own. In theory this stock distribution would increase Verizon's outstanding shares by about 30%.

In the last 12 months, Verizon generated $23.5 billion in core free cash flow and paid $5.9 billion in ordinary dividends. With 30% more shares, Verizon would have needed $7.7 billion to cover its dividend outlay. Given the company's cash flow, the new payout ratio would still be relatively low at 32.8%. In order for Verizon's dividend to double, the company would have to pay $15.4 billion in dividends. With $23.5 billion in free cash flow, this would equate to a core free cash flow payout ratio of about 66%. While a 66% ratio would be significantly higher than today, AT&T's ratio is already at 61%, and it's not unusual to see payout ratios of 60% or more in the telecom sector in particular.

Given Verizon's strong growth prospects and cash flow generation, it's plausible that the company could grow its payout ratio to 66%. The stock carries a yield of roughly 4.5% today. If the payout ratio was 66%, Verizon would offer investors a 9% yield at current prices. With an expected earnings growth rate of 10% per annum in the next few years, Verizon already looks like a good buy. If the company is aggressive with its dividend growth after the Vodaphone deal, investors could be in for a big surprise.

I wouldn't suggest waiting to see if the company's dividend doubles, add Verizon to your buy list today.