Last week, office-supply retailer Staples, (NASDAQ:SPLS) announced plans to shrink in two ways. First, the company plans to close 225 stores by the end of next year as part of a $500 million cost cutting program. Second, it plans to downsize most of its stores over time to a smaller format that is cheaper to operate.

This restructuring plan came in the context of dismal Q4 results for Staples. Staples' EPS of $0.33 fell short of the average analyst estimate of $0.39. This bad news sent the stock down toward the multiyear low reached in late 2012. 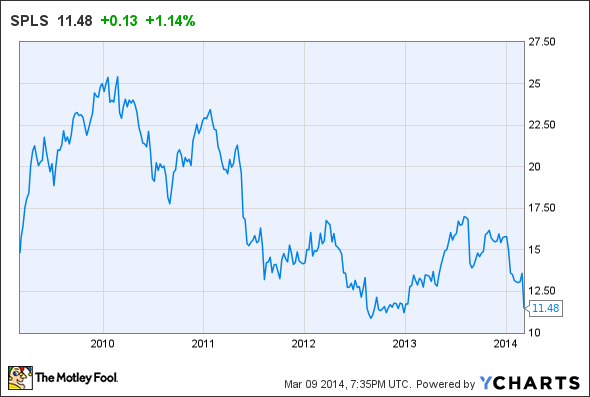 However, the plan to shrink Staples should allow the company to improve its profitability over the next few years -- despite dwindling demand for certain products like digital cameras and file cabinets. Store closures at top rival Office Depot (NASDAQ:ODP) should also provide a tailwind starting later this year. This makes Staples an intriguing turnaround play.

Reinventing Staples
One of the best things about Staples from an investor perspective is that it already has a large e-commerce business that represents nearly half of total company sales. Last quarter, sales through Staples.com grew 10% excluding currency fluctuations and the impact of an extra week in Q4 2012.

This e-commerce business is a significant competitive advantage for Staples. Staples is driving online sales gains by adding more items to its assortment -- it plans to have 1.5 million items within a year, up from just 100,000 at the beginning of 2013. Additionally, the company has a well-developed distribution network, which allows it to offer free next-day delivery with no minimum order.

On the other hand, Staples does have a large network of stores, which carry significant fixed costs. As in-store sales decline, it has become critical to rationalize the store base in order to make Staples more profitable.

Time to downsize
By the end of 2015, Staples plans to close up to 225 stores in North America, more than 10% of its store base. Some of these stores are already unprofitable, while others are marginally profitable but don't meet Staples' long-term strategic needs.

In some parts of the country -- particularly the Northeast -- Staples has a very high market share, with multiple stores located near each other. In this type of situation, removing one store can make the others much more profitable, as they capture some of the sales that would have gone to the store that is closed.

As store leases expire, Staples plans to convert most locations to this 12,000 square foot size through renovations or relocations. These smaller stores sell nearly as much merchandise as the 25,000 square foot Staples stores, but with drastically lower rent, labor, and utilities costs. As Staples stores downsize over the next 5 years or so, retail margins should improve significantly.

Merger benefits
While Staples' profit-improvement initiatives should bear fruit over the next several years, the company will also benefit from integration activities at Office Depot, which merged with OfficeMax late last year. One of the main justifications for the Office Depot-OfficeMax merger was the opportunity to reduce store overlap between the two chains.

Stock on sale
Long-overdue consolidation and rationalization in the office-supply market makes both Staples and Office Depot intriguing turnaround candidates. However, Office Depot is a much riskier and more speculative stock, as the company is currently running at around breakeven. Its ultimate value depends heavily on the level of merger synergies it is able to realize.

By contrast, while Staples is also a turnaround story, it is a solidly profitable company with a valuable brand name and a large and growing e-commerce business. It also offers a nice dividend that currently yields more than 4%. If Staples manages to successfully execute its turnaround, investors should see above-market returns over the next several years.