Please ensure Javascript is enabled for purposes of website accessibility
Free Article Join Over 1 Million Premium Members And Get More In-Depth Stock Guidance and Research
By Matthew DiLallo - Mar 10, 2014 at 10:45AM

Whiting Petroleum had good things to say about the Niobrara last quarter.

Whiting Petroleum ( WLL ) sees its Redtail Niobrara Prospect in Colorado as being a transformative discovery for the company. It believes that its 122,278 net acres are in the sweet spot of the oil rich portion of the DJ Basin. Because of this the company sees a multi-year inventory of high returning drilling locations. It's just one of a handful of oil companies turning to Colorado for oil fueled production growth.

Lots and lots of oil

Whiting sees three oil rich zones underneath much of its acreage. This provides it with the opportunity to drill 16 to 32 wells in a drilling section as it looks to recover a portion of the original oil in place as the following slide shows. 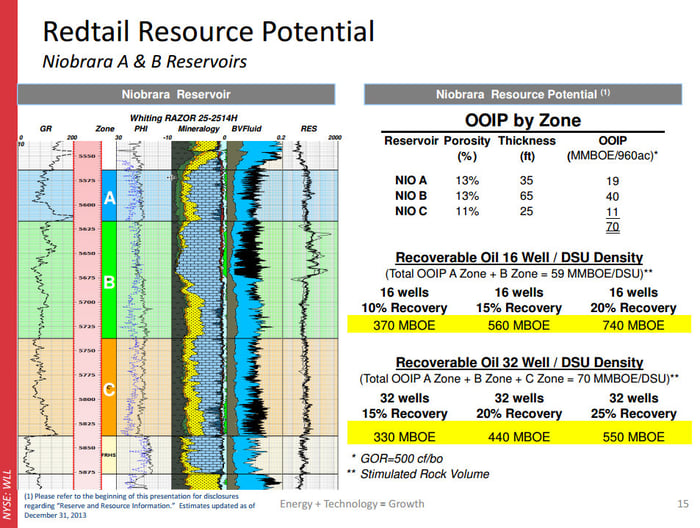 Under its current spacing and development plan, the company sees the potential for more than 3,300 future drilling locations. That's actually a 28 year drilling inventory given the company's current pace of drilling. Needless to say, Colorado will be a big part of Whiting's future plans.

Promising results point to a solid future
It's joined in the state by companies like Anadarko Petroleum ( APC ), Noble Energy ( NBL ) and ConocoPhillips ( COP 2.42% ). Both Anadarko and Noble have already enjoyed significant production increases in the state, while all three see the state as being a big part of future drilling plans.

Anadarko's net sales volumes have skyrocketed over the past few years as it has used horizontal drilling to unlock the Wattenberg Field. Production surged from just 4,000 barrels of oil equivalent per day, or BOE/d in 2011 to 56,000 BOE/d last year. Another surge to 90,000 BOE/d is expected this year. Looking ahead Anadarko sees 20% compound annual growth through 2018. Best of all these wells come with superior economic returns as the company earns a more than 100% rate of return on wells drilled in the state.

Noble Energy has an enormous position in the region with 609,000 net acres, of which 87% of those acres are in the oil rich window of the DJ Basin. The company sees net resource potential of 2.6 billion barrels of oil and 9,500 future drilling locations. That position will enable Noble Energy to grow its production by an average of 23% annually over the next five years.

Finally, we have global oil giant ConocoPhillips, which is actually a little bit farther behind. The company is currently spending a portion of its unconventional exploration budget on drilling in the Niobrara as it determines what it has in the state. That said, there is reason for ConocoPhillips investors to be encouraged by the results that Whiting, Anadarko and Noble are seeing in the state. Those results suggest that it's a pretty safe bet that ConocoPhillips will see a portion of its future growth fueled from this Colorado oil field.

Investor takeaway
As the American oil boom shifts into second gear, we're beginning to see new fields open up in places not traditionally known for oil production. Colorado is one of those places. Because of this, each new well we drill in a place like Colorado is like putting another nail in the coffin of OPEC as we take another step closer to becoming energy independent.

This is what has OPEC really worried