Sangamo Biosciences' (NASDAQ:SGMO) promising early stage HIV drug SB-728-T may someday change how doctors treat patients. Results from a small, 14 person phase 1 trial suggest that while the drug doesn't eradicate HIV from patients, it may someday offer patients a functional cure that controls the disease enough for them to avoid continuous therapy.

The compound is just barely out of pre-clinical studies and likely years away from FDA approval; however, investors have sent shares soaring on hope it would allow Sangamo to eventually challenge antiviral drug specialist Gilead (NASDAQ: GILD) for share in this $18 billion market. If so, SB-728-T may also end up competing with new, fast-growing therapies like Tivicay, a $14,000 a year treatment from ViiV Healthcare, the consortium that includes GlaxoSmithKline (NYSE:GSK), Pfizer (NYSE:PFE), and Shionogi, and Johnson & Johnson's (NYSE:JNJ) Prezista. 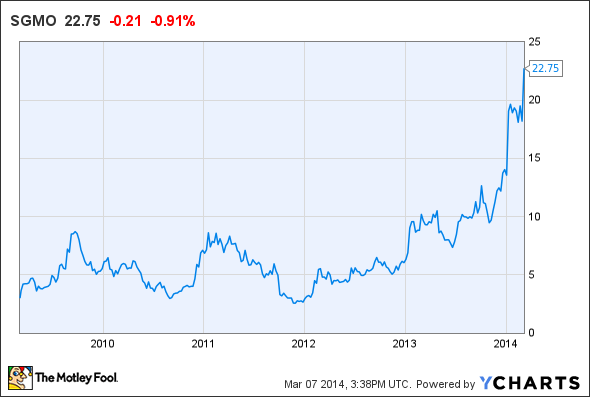 A market of blockbusters
The most successful developer of HIV treatments to date is Gilead, a company that has been at the forefront in transforming HIV into a chronic disease.

Gilead's HIV drug franchise racked up sales of $9.3 billion in 2013, thanks in part to its fast growing new drugs Coplera and Stribild, which cost $1,700 per month, and $28,500 per year respectively.

Complera won FDA approval in August 2011 and its sales doubled to more than $800 million in 2013. Stribild, which won approval a year later, saw its fourth quarter sales quadruple to $204 million. That suggests both may become blockbusters soon.  Due to prescription growth, analysts think Stribild sales could eventually peak as high as $4.7 billion a year.

Sales of Johnson & Johnson's drug Prezista jumped 18% last year to nearly $1.7 billion, including a 30% year-over-year increase in the fourth quarter to $461 million.

And while it remains to be seen whether Tivicay will be as successful, analysts believe the drug could exceed $2 billion in peak sales. During its fourth quarter earnings conference call, Glaxo reported doctors wrote 1,700 scripts for Tivicay in its first 23 weeks, stating that the launch is "on pace with the best recent launches in the HIV space".

The next step for treating HIV
Current treatments have significantly improved outcomes; however, a cure remains elusive. Sangamo hopes its SB-728-T drug can change that.

Phase 1 data published this week in the New England Journal of Medicine shows patients treated with SB-728-T achieved not only ongoing functional control of viral load at seven months, but did so without the use of antiretrovirals like those sold by Gilead. SB-728-T accomplishes this by altering a gene to mimic a mutation that affects the expression of CCR5, a protein that acts as a co-receptor for HIV cell entry.

It has been discovered that people possessing that natural mutation are less susceptible to infection, and that people inheriting that mutation from both parents are effectively immune to the most common form of HIV. This approach differs from early generation HIV therapies which inhibit enzyme production important to HIV's ability to spread to healthy cells.

Fool-worthy final thoughts
Sangamo is shifting from using non-replicating viruses to deliver SB-728-T, to using messenger RNA. The company believes mRNA delivery will both improve the drug's efficacy and allow for potential retreatment.

The company is looking to ink a deal with a partner to pay for future development and trials, suggesting investors should not only watch to see if this new delivery mechanism is more effective, but whether a well-heeled collaborator is willing to team up on the drug. While this drug also holds tremendous potential, investors should also keep in mind that years of clinical development lie ahead.