The auto parts industry seems to be experiencing happy times as retailers in it have been performing extremely well. The average age of vehicles has increased to 11.4 years, which allows auto-parts companies to comfortably cash in since people spend more to maintain their old vehicles. Recently, leading retailers O'Reilly Automotive (NASDAQ:ORLY) and Advance Auto Parts (NYSE:AAP) posted quarterly numbers which beat estimates and delighted investors.

However, Advance Auto Parts has even greater news to offer since it seems to be on an acquisition spree with the intention of strengthening its commercial business segment.

The numbers
Advance Auto's revenue surged 6% to $1.41 billion, helped by the addition of 151 new stores and comparable-store sales growth of 0.1%. Extreme winter conditions also forced customers to get their vehicles repaired more frequently, which resulted in higher sales.

O'Reilly's revenue grew 9% over last year's quarter to $1.62 billion. The company's top-line growth was driven by the 32 new stores it opened during the quarter as well as comparable-store sales growth of 5.4%.

However, Advance Auto's margin decreased slightly. This was mainly because the company recorded a higher percentage of commercial sales, which have a lower margin.

The competition
Although O'Reilly had some added positives in its earnings report that delighted its investors, Advance Auto has provided enough reason for its investors to be joyful. Advance Auto provided a higher return to its investors over the last year than fellow industry players O'Reilly and AutoZone (NYSE:AZO). This is depicted in the chart below: 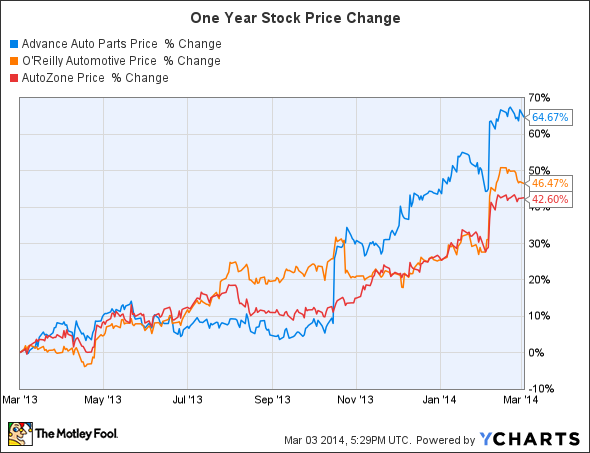 With stock price appreciation of 64.7% over the last year, Advance Auto Parts outpaced its peers. This is mainly because its acquisition strategy boosted its commercial business. The acquisition of 124 BWP stores at the end of 2012 helped the company expand its presence and strengthen its offerings, which led to higher sales.

On the other hand, AutoZone provided a lower return than the other two at 42.6%. However, AutoZone has been making a number of efforts to improve such as acquiring other businesses such as AutoAnything, which it acquired in 2012. AutoZone bought this company to expand its online presence since AutoAnything is an online retail store. In fact, the company did not limit its efforts to its e-commerce business alone. It has been trying to expand its commercial business as well. By opening 125 commercial programs in its last quarter, the company grew its commercial segment by 14%. Hence, this retailer has also been doing well but it has failed to outperform its peers.

An acquisition and its benefits
One of the most remarkable recent moves by Advance Auto Parts was its acquisition of General Parts International which is expected to increase Advance Auto's revenue to more than $9 billion. This buyout will not only expand the auto parts retailer's line of offerings, it will also strengthen its presence in North America and make the company the biggest auto-parts player in the region. Hence, this expanded footprint will help Advance Auto's DIY business division.

Advance Auto's future plans
The aftermarket retailer plans to open 120 to 140 new stores in 2014 which will help its sales grow further. Additionally, it expects to completely integrate the remaining BWP stores during the year and it will also start reaping the benefits of its recent acquisition of General Parts. Hence, the company's future looks bright for the coming months.

Moreover, the company plans to spend $325 million to $350 million on capital expenditures during the year. It will use this investment to enhance its supply chain and develop its stores.

Key takeaway
Advance Auto Parts is making all the right moves for leadership in the auto-parts industry. Although all of the players there are doing well, Advance Auto has been an exceptional performer. It has strengthened its commercial business and this business now makes up 40% of its total revenue. Moreover, it plans to continue investing in order to enhance its position and manage its expenses so that it can maximize its earnings. The company is set to grow which is evident from its plans to open new stores. Therefore, this retailer looks increasingly attractive.