Please ensure Javascript is enabled for purposes of website accessibility
Free Article Join Over 1 Million Premium Members And Get More In-Depth Stock Guidance and Research
By Matthew DiLallo - Mar 11, 2014 at 9:40AM

While proved reserves provide the foundation of value for an energy company, it’s the contingent resources that provide the upside.

Energy investors need to know a lot of industry lingo in order to seriously invest in oil and gas stocks. One of the key words to know is proved reserves. This is the oil and gas in the ground that's controlled by an energy company that it is reasonably certain in its ability to extract given current economics and technology. However, on top of proved reserves some companies are just loaded with potential future reserves that are known as probable and possible reserves. In addition to that, many companies have even more potential in what are known as contingent reserves. Add it all up and these hidden assets can point to enormous future upside.

Where things get really interesting is when we consider that Magnum Hunter Resources has another 61.5 million BOE in total probable and possible reserves as well as a staggering 728.9 million BOE in contingent resources as the following slide shows.

The company sees just the undeveloped acreage value of these contingent resources being worth $1.6 billion to $2.1 billion. When combining that with the company's midstream and drilling operations worth another $450 million, and the company sees its asset value being worth more than $3 billion. On a per share basis it sees a value in the range of $10.14 to $14.12 per share, which is substantially higher than the current $8 stock price. As Magnum Hunter Resources develops its acreage and proves up some of these reserves it has the potential to realize even more future value. 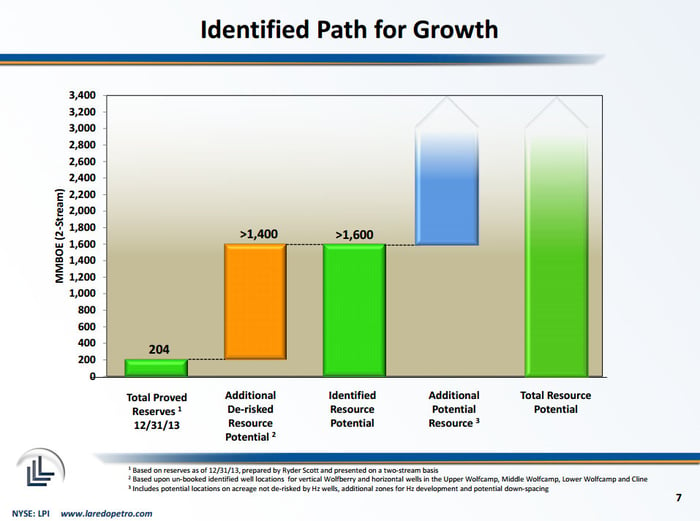 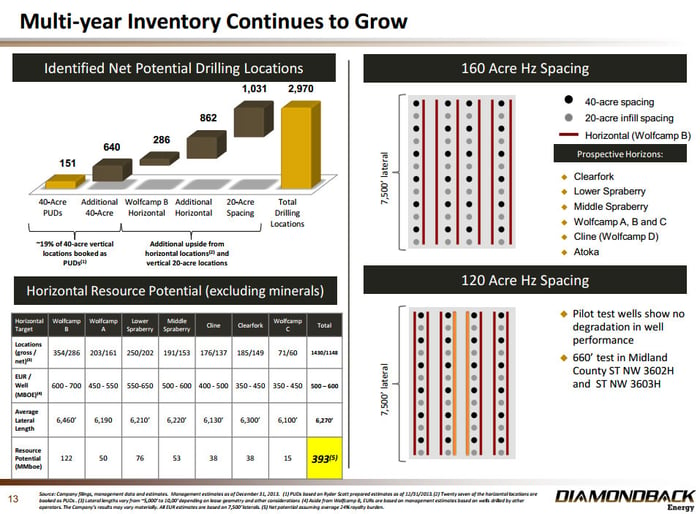 Both Laredo and Diamondback are early in developing new zones within the Permian Basin. Because of that this potential is likely to continue growing as these companies are still determining the best way to unlock all of the oil and gas locked within the multiple layers of the Basin. That leaves room to believe that there could be even more upside potential in the future as these companies develop the basin.

Investor takeaway
We're still in the very early stages of the shale revolution in some parts of the country. Magnum Hunter Resources, for example, is just beginning to discover its potential in the Utica Shale. Meanwhile, both Laredo Petroleum and Diamondback Energy are still in the early stages of unlocking additional zones of the Permian Basin. Because of this there's still an enormous amount of upside for these three oil and gas companies.