Many retailers have been beating expectations, yet the actual numbers are still poor. Fortunately, Foot Locker doesn’t fit into this category. Its actual results are impressive.

Foot Locker ( FL -1.52% ) has impressed Wall Street with its fourth-quarter and fiscal-year 2013 results and future outlook. Unlike many other retailers, where expectations overrule actual performance and stock moves make little sense, Foot Locker's stock movement based on recent results seems to be justifiable.

Comps (same-store sales) are key because they only include stores open at least one year. In other words, they exclude revenue at new store openings, which can skew performance perception. A 5.3% comps increase indicates continuous demand and customer loyalty. It's an especially impressive number in the current economic environment featuring a hesitant consumer.

If you're not a believer in putting too much weight in short-term results, which makes sense, then consider fiscal-year 2013 results. Net income came in at $429 million versus $397 million in fiscal-year 2012. Total sales increased 5.2%, and comps improved 4.2%. Once again, these are very strong numbers in a challenging consumer environment.

Looking ahead, Foot Locker aims for growth via its children's business, e-commerce, vendor partnerships (store-in-store), and improved product assortments. Based on these initiatives, Foot Locker expects fiscal-year 2014 comps growth in the mid-single digits (percentage-wise) and for double-digit increases in earnings per share.

It's comforting to know that Foot Locker has an even longer-term game plan for growth. This includes European expansion, store remodels, heavier technological investments, and an increased focus on the female consumer.

It's likely that you're impressed so far. That makes two of us. The information below isn't just impressive but will likely be surprising to some as well.

Fiscal strength
In order for a retailer to compete in today's economic environment, it must possess fiscal strength. Look at Wal-Mart as an example. It might not be growing at the same rate as in the past; but with operational cash flow generation north of $23 billion over the past year, it has opportunities to grow organically via new initiatives, purchase smaller companies for inorganic growth, and return capital to shareholders.

Foot Locker is nowhere near the size of Wal-Mart. But it might surprise some people to know that it possess more fiscal strength than several of its peers, including Dick's Sporting Goods ( DKS -2.67% ), Hibbett Sports ( HIBB -4.27% ), and The Finish Line ( FINL ).

With the exception of Dick's Sporting Goods, those are strong balance sheets. However, when you combine cash flow generation with the balance sheet, Foot Locker is easily more impressive than its peers.

This isn't to say that Dick's Sporting Goods, Hibbett Sports, and Finish Line shouldn't be considered for investment consideration. In fact, they have all outperformed Foot Locker on the top line over the past five years: 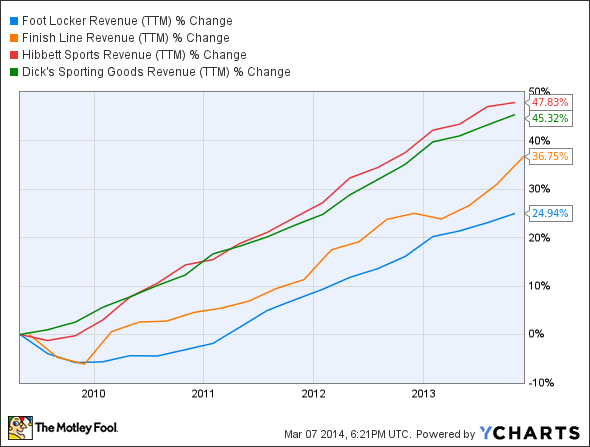 On the other hand, it's the future that matters. And Foot Locker has the capital to fuel sustainable growth, especially since comps have continued to grow, which indicates strong demand. Furthermore, Foot Locker currently offers a dividend yield of 2.1%, whereas Dick's Sporting Goods, Hibbett Sports, and Finish Line offer dividend yields of 0.9%, zero, and 1.2%, respectively.

The bottom line
It's not easy to invest in a retailer with confidence these days, but if you're going to make this decision, then Foot Locker is worthy of consideration. It has everything going for it: strong demand, fiscal strength, a long-term game plan, and it even pays a somewhat generous dividend. Please do your own research prior to making any investment decisions.