Please ensure Javascript is enabled for purposes of website accessibility
Log In Help Join The Motley Fool
Free Article Join Over 1 Million Premium Members And Get More In-Depth Stock Guidance and Research
By Matthew DiLallo - Mar 11, 2014 at 9:20AM

Thanks to tighter well spacing the Eagle Ford Shale keeps getting bigger.

Better data on previously drilled wells along with improved completion techniques have contributed to the boost. However, the real reason the Eagle Ford Shale keeps getting bigger is because companies like EOG Resources now know that future wells can be drilled much closer together without interfering with other wells. That's enabling producers to boost future drilling locations as well as resource potential.

Getting closer = getting bigger
In 2010 EOG Resources thought that it would be able to drill about 5 wells on each section that included 130 acre spacing. Further, it estimated that each well would ultimately produce 320,000 barrels of oil equivalent over its lifetime. However, as the following slide shows the company now believes it can drill more wells per section on closer spacing as well as seeing a higher average estimated ultimate recovery per well. 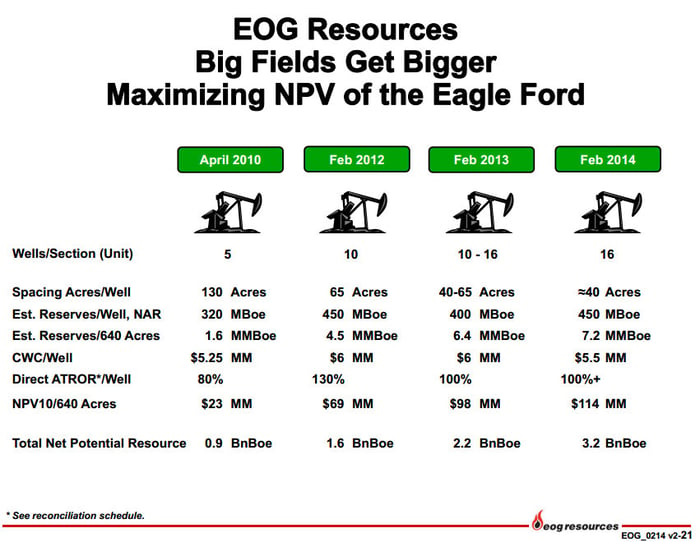 As the slide details, the company now has a plan to drill 16 wells per section. Because of this EOG Resources sees the potential for 6,000 future wells on its current 632,000 net acreage position, which could unlock 3.2 billion BOE.

More companies are likely get bigger in the Eagle Ford Shale thanks to down-spacing. Penn Virginia Corporation (NYSE: PVA), for example, is still testing down-spacing on its acreage. To date the company's current position gives Penn Virginia at least 890 remaining drilling locations across its 72,000 net acres, which could ultimately produce 170 million BOE. However, the company sees the potential to add to its drilling inventory as it spaces its wells closer together. When combined with its active leasing program, Penn Virginia believes it will eventually drill at least 1,000 future wells in the Eagle Ford Shale.

Investor takeaway
We're still very early in the development of the Eagle Ford Shale. That means it's quite possible that the Eagle Ford could continue to grow as producers figure out the best way to develop the play. Right now we're seeing down-spacing playing a key role as its currently adding a lot of additional drilling locations for producers, which will unlock a lot more oil. However, down-spacing is just one of the many new tools producers are using to extend America's energy boom well into the future.